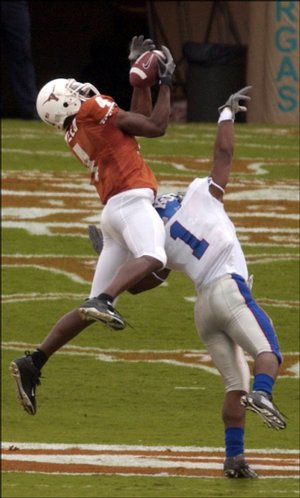 The Texas Longhorns locked up the Big 12 south and racked up 617 yards against KU on Saturday.

Austin, Texas — Texas handed Kansas one of its worst losses in 115 years of football with a 66-14 defeat in front of 80,000-plus UT fans on Senior Day at Darrell K Royal-Texas Memorial Stadium in Austin, Texas Saturday.

Vince Young threw for a career-best four touchdown passes in the first half as the Longhorns jumped out to an early 28-0 first quarter lead. Texas had built a 52-0 halftime advantage thanks to three first half scores that went for 45 yards or longer.

"I am really excited about the attitude of the team," UT coach Mack Brown, whose 10-0, 7-0 Big 12 squad secured the Big 12 south title with the lopsided victory. "You never know what you are going to get for Senior Day. The guys played hard for the seniors and the seniors played hard for each other.

"The guys were excited," Brown continued. "This accomplishes their first goal, which is to go to Houston for the Big 12 Championship."

Kansas, which suffered its most lopsided loss since a 59-0 setback to Austin in 2001, got a few bright spots out of its running game in the third quarter when Jon Cornish broke off a 59-yard touchdown run and Brandon McAnderson followed with a 15-yard score.

"I want to tell you what an impressive football team the University of Texas has," said KU coach Mark Mangino, whose 5-5, 2-5 Big 12 was in danger of suffering the worst loss in program history at halftime. "I do not think I have ever been on a field where I have seen so many big, strong, fast and talented kids."

"This is an impressive football team and I want to tip my cap to them and Mac Brown for a great game and a great season that they have going," Mangino continued. "We did not play as well as we should have, but a lot of that had to do with Texas.

After No. 2 Texas didn't do anything on its first two possessions, the Longhorns took control of the game in a 13-second span midway through the first quarter.

First Young hooked up with Limas Sweed for a 45-yard touchdown pass as the 6-foot-5 Sweed outjumped 5-11 Theo Baines in the end zone.

KU kick returner Greg Heaggans then fumbled the ensuing kick off, and Texas recovered at KU's 10-yard line. One play later UT running back Jamaal Charles had a powerful run which saw him shake several KU defenders for another score and the 14-0 lead.

"I don't want to blame anything," KU linebacker Kevin Kane said of the Jayhawks early struggles. "I don't know if we were tired or what, but we definitely had a lack of energy."

Cosby, who beat KU safety Rodney Fowler down field, shook off Folwer's arm as he tried to prevent him from catching the ball and easily ran into the end zone for the 21-0 lead.

A little more than two minutes later Ross, who later in the game nearly had an interception return for a touchdown, danced around before finding a seam down the middle for the score.

"We haven't been used to that this year," Kane said about UT's offensive explosion. "But we can't look back on that right now."

Kansas certainly doesn't want to think that at halftime it was facing quite possibly the worst loss in program history.

Young -- who actually finished the game with his worse-ever rushing performance (six carries for negative-four yards -- dominated the Jayhawks through the air as he completed 15-of-22 passes for 263 yards and four touchdowns.

"Vince is phenomenal," Mangino said. "You can see why a lot of people think he is the front runner for the Heisman. I do not have a vote but to me he looked like a Heisman trophy guy tonight. He is just amazing and he shows you what a talened young guy he really is."

Young, who is 27-2 as a starter and has led Texas to 17-straight wins (second behind only USC) became UT's all-time leader in total offense when he completed a 32-yard completion to David Thomas in the first quarter.

"It's a great feeling to break records, but I will always give respect to the guys who did it before me," he said.

But it wasn't just young who bullied the Jayhawks decorated defense around.

The Longhorns rushed for 336 yards on 53 carries. Taylor Ramonce had 96 yards on 14 carries and two touchdowns. Henry Melton had 73 on just seven attempts, while Jamaal Charles added 70 on only eight carries and Selvin Young added 57 on seven carries. Charles and Young each scored.

"With this being the No. 1 rush defense in the nation, we watched film and found some holes and took advantage of it," Taylor said. "We just went out there, ran the ball and played Texas football."

If there was a positive for Jayhawks it had to be their ground game.

Despite the ugly, lopsided loss, KU players said they know that a win against Iowa State in two weeks will determine how their season will be judged.

"This team is really good at letting losses go," said KU quarterback Jason Swanson, who threw for 148 yards. "We've been in positions before when we've lost games. This is a loss. It doesn't matter what the points are -- it's still an 'L." We'll be putting it behind us by the time we get on the bus."