Prior to arena, Jayhawks used to play basketball in cramped Hoch Auditorium

Some call it the House that Wilt Built. Not true.

Allen Fieldhouse was completed months before Wilt Chamberlain showed up on the Kansas University campus.

Many others believe the impetus for construction came when the Jayhawks captured the 1952 NCAA men's basketball championship. Another fallacy.

The Kansas Legislature had approved the $2.5 million to build the fieldhouse more than a year before the Jayhawks won the '52 title.

The truth is that Allen Fieldhouse evolved because KU was not keeping up with the Joneses. Kansas State had Ahearn Fieldhouse. Missouri had Brewer Fieldhouse. Nebraska had Schulte Fieldhouse. Colorado had Balch Fieldhouse. Why didn't KU have one, too?

Kansas was playing basketball in front of a stage in Hoch Auditorium, while its other sports were using antiquated Robinson Gymnasium (not the spacious, refurbished Robinson Gym of today).

The first seed was sown Oct. 7, 1946, when the Kansas Board of Regents instructed KU Chancellor Deane Malott to begin studying possible sites and methods of paying for a new campus sports arena.

Six months later, the Kansas House ways and means committee killed a bill that would have ticketed $650,000 toward the construction of a 10,000-seat fieldhouse on the KU campus. Nevertheless, two years later, the legislature appropriated $750,000 for a KU sports facility. Not enough.

It would be another two years before the state legislature approved the remainder of the funding for the $2.5 million project. A year after that, construction began. Finally, three years later, Kansas University had its fieldhouse. 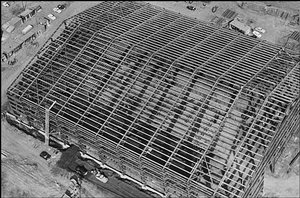 From germination to fruition, the process had taken nine long years.

And not everybody was pleased with the final product.

"Everybody complained it was too big and too far away from town," said Warren Corman, a project architect then and KU's chief architect now.

Today, Allen Fieldhouse isn't big enough for the number of fans who want to watch the KU men's team perform, and many of the fans lucky enough to obtain tickets wish the looming limestone structure wasn't so close to campus and its limited parking.

When the fieldhouse finally was finished, it was the largest basketball arena in this part of the country and one of the biggest in the nation. How many fans the building held at its inception is a matter of conjecture.

Before anyone could count the number of seats, Phog Allen declared that the capacity was 17,000, and who was going to dispute the legendary KU coach and the building's namesake? Privately, KU officials said 16,000 was more like it. Nevertheless, the estimated dedication-day attendance of 17,228 remains the all-time high and a record that cannot be broken because today's official capacity is 16,300 -- nearly 1,000 fewer than the record.

Not until 19 years later did KU officials revise the capacity. In the summer of 1974, new end-zone bleachers were installed as part of a large renovation project, and KU officials announced they had "lost" 1,000 seats. The new number was 16,000.

That was also the summer, incidentally, that the dirt surface that defines a fieldhouse was completely covered. In other words, for the last three decades, Allen Fieldhouse technically has been a misnomer.

Not that anyone was sorry to see the dirt go. Insidious dust was a nagging problem in the coaches' first-floor offices, and the dirt floor required the installation and storage of a raised basketball floor every year.

Problems cropped up, too, when seasons overlapped. Basketball and track used the fieldhouse for simultaneous practices, and the football team often had to use it as an indoor workout facility. Former KU quarterback John Hadl remembers a day when football coach Jack Mitchell brought his team into the fieldhouse while basketball coach Ted Owens was conducting a practice. 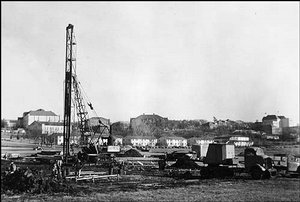 A crane stands on the site of what would become the Jayhawks' venerable barn.

The dirt was covered with a synthetic surface. At the same time, a different synthetic was used for the new basketball court. But that surface was removed five years later after studies showed it caused shin splints. A portable wood floor, much like the one used today, was installed for the first time in the summer of 1979.

During the huge '74 renovation project, the original scoreboard was replaced by a larger, more technologically advanced unit that lasted until the current one was installed at a cost of $466,000 -- all of it paid by advertisers -- midway through the 1990-91 season.

A major change in the fieldhouse configuration occurred in the summer of 1981, when the original media section located on the first balcony of the west side was removed and blue chairback seats installed. The media were re-situated on the floor on the east side. At the time, the official capacity was lowered to 15,200 -- the smallest it ever has been.

Four years later, new aluminum bleachers on the east and west sides added 600 seats to the official count. Then in the summer of 1994, 500 more seats were squeezed in above the four entryways and at the end of lower balcony rows to bring the capacity to the current 16,300. 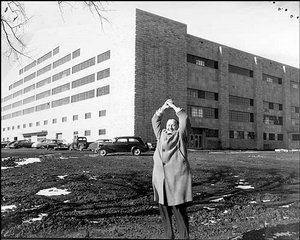 Phog Allen stands outside the arena that bears his name, Allen Fieldhouse, just after its completion in 1955.

Upgrading continued in the summer of 1998, when a $3.5 million project provided new restrooms, concession stands, enhanced entryways and an elevator in the south end.

Old by contemporary standards, Allen Fieldhouse is not the oldest arena in the Big 12 Conference. Oklahoma State's Gallagher-Iba Arena owns that distinction, yet the Cowboys' home bears little resemblance to the Gallagher Hall that was built on the site in 1938.

Allen Fieldhouse looks the same from the outside as it did five decades ago, but not for long. The whole east facade will change with the construction of the Booth Family Hall of Athletics, hopefully in time for the 2005-2006 season.

At the same time, thanks to gifts from the Ward Family, major upgrades are planned. More restrooms will be renovated, the original windows replaced and the exterior cleaned.

By some estimates, the Mount Oread icon needs more than $10 million in repairs, or four times what it cost. Still, Allen Fieldhouse is structurally sound and should remain so for years to come because of the large amount of steel and stone -- a byproduct of the Cold War mentality of the times -- used in its construction

Legislators who approved the money to build Allen Fieldhouse did so in part because they envisioned it also being utilized as an armory that would withstand everything but a direct hit from Russian bombs.