Rideau was convinced he didn't deserve it.

"The guy comes up to me and said he let the team down because he dropped some passes," Mangino said of the senior receiver. "I told him I didn't care about the drops. I know he can do it. He'll catch the ball next week. He turned the game around with his special-teams play."

Rideau blocked a Chris Kindred punt in the first quarter, and KU took over at midfield with the game scoreless. The good field position was squandered when senior kicker Johnny Beck missed a 45-yard field goal.

Rideau got to Kindred again, and KU took over at Tulsa's 17 with 52 seconds left in the third quarter.

Rideau felt good about the blocks, but he didn't think they made up for three dropped passes in the first half when KU's offense was sputtering. He caught three passes for 27 yards.

"My teammates voted me to be a captain, and I feel I should lead," said Rideau, who caught 51 passes for 677 yards as a junior. "I shouldn't make any mistakes. It hurt me because my primary job is to play receiver and catch the ball. That's what I'm here for. I didn't do that like I should have. I felt like I had a pretty poor performance."

The rest of the team obviously disagreed, as evidenced by Rideau's game ball. 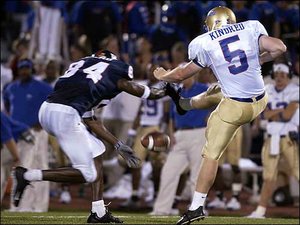 Kansas' Brandon Rideau blocks a punt by Tulsa's Chris Kindred in the second half. Rideau had two blocks in the Jayhawks' 21-3 victory Saturday at Memorial Stadium.

"That made me feel like my teammates still believe in me," he said.

Mangino, however, wasn't happy that the senior kicker missed an extra point.

"I wanted Johnny to know we had confidence in him," Mangino said of the 51-yard attempt. "But he missed an extra point. That's an issue with me. ... We can't have that any more."

Mangino was pleased, however, that his special teams helped make up for a 201-yard performance by the offense.

"We may spend more time on special teams than any club I've ever been associated with," Mangino said. "Our philosophy is that in close games, special teams can give you the edge. Tonight was a case in point."

Sophomore cornerback/receiver/return man Charles Gordon didn't have a chance to do one of the things he does best. Gordon, who averaged 13.1 yards per punt return last season, had five yards on three returns.

"It's going to come," Gordon said. "I just have to stay prepared."