By By Jay Senter

The skid is over.

On the strength of a two-touchdown fourth quarter Saturday night, the Kansas University football team defeated Kansas State University, 31-28, ending an 11-game losing streak at the hands of the Wildcats.

"We got to show them some payback," said KU sophomore Charles Murphy, standing on the football field with throngs of revelling fans after the game. "We got to show how much love we've got for KU football."

Kansas State came into the game favored by three points, but at the end it was the fans wearing purple who were feeling blue.

Kansas State alumnus John Lewis came to the game with his three children, all decked in Wildcat wear.

"It was bound to happen sometime," Lewis said as his family exited Memorial Stadium moments before the victory was official. "But if you would have told us in 1992 that it would be 2004 before we lost to KU, we would have taken that." 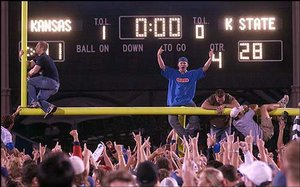 Kansas University fans tear down the goal post at the south end of Memorial Stadium after KU's defeat of Kansas State University. The KU victory Saturday was the first over the Wildcats in football since 1992.

"This is very disappointing," she said. "We've held this position for so long. We were such a force."

KU students began crowding onto the southwest corner of the field before the game clock had expired, forcing officials to delay the start of the final down as the public address announcer pled with the students to back away.

Once time had expired, though, it took but a few seconds for hundreds of fans to go to work on the goal posts.

In an effort to prevent a recurrence of the damage done to the goal posts after last year's KU football victory over Missouri, the KU athletic department installed quick-release screws at the base of the posts this season. The mechanism allows the posts to come down without cracking the expensive base, provided that stadium staff have a chance to loosen the screws.

While the field crew managed to get to the north goal post in time, so many students had gathered around the south end zone that field crews could not access the screws.

"This one is all right," said field crew member Josh Roberts as he examined the base of the north goal post while hundreds of students marched up the Campanile hill with the uprights. "But the other one, it's messed up."

About 45 minutes after the game, fans carried one of the goal posts down Massachusetts Street.

Lawrence and KU police reported that the postgame celebration had been relatively civil, though they anticipated more disturbances as the night progressed.