Kansas University athletic director Lew Perkins spent 13 years as AD at Connecticut in the Big East Conference, so he was able to watch Bonnie Henrickson build her Virginia Tech women's basketball program into a conference contender.

Perkins must have liked what he saw.

Henrickson, 40, will be introduced as the fifth women's basketball coach in KU history at a press conference at 4 p.m. Monday in Hadl Auditorium. Her contract is believed to be a five-year deal.

"She just said she felt comfortable with her decision and that it was a good opportunity for her," Tech athletic director Tim Weaver said Saturday. "Quite honestly, I surmise that there must be a lot of money involved, because the University of Kansas is buying out her contract."

Henrickson replaces Marian Washington, who guided the Jayhawks to 560 wins in 31 years before retiring because of undisclosed health reasons midway through this season.

Henrickson is expected to bring Tech assistant coaches Karen Lange, Katie O'Connor and Kelly Kramer with her to Kansas. KU assistants Lynette Woodard, Tim Eatman and Kate Galligan are not expected to be retained.

At Tech, Henrickson went 158-62 in seven seasons with five NCAA Tournament appearances, including a Sweet 16 berth in 1999. She won at least 20 games each year and averaged 23 wins per season.

Weaver said Perkins called him 21/2 weeks ago requesting permission to speak to Henrickson.

Weaver said an agreement was reached that "we would wait until the postseason is over" before any discussions took place. The Hokies lost to No. 1-seed Penn State on Tuesday night in the second round of the NCAA Tournament. 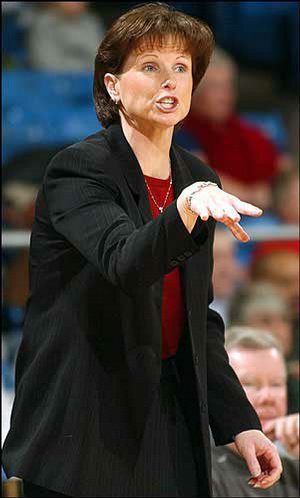 Henrickson flew Thursday to St. Louis to meet with Perkins, who was traveling with the KU men's team in the NCAA Tournament. They agreed to a deal Thursday night, then Henrickson returned Friday to Tech and informed Weaver she was leaving.

Henrickson was traveling Saturday and was unavailable for comment.

"We've scheduled a press conference for Monday, and that's when we will comment," KU associate athletic director Jim Marchiony said.

Weaver said KU would pay Tech $523,000 to buy out the three years remaining on her contract.

Henrickson had a rolling four-year contract and received a base salary of $164,735 at Tech. She earned an additional $75,000 in supplemental pay, and performance-based incentives also were included. She received a new contract in 2002, which included a $500,000 annuity payable to Henrickson if she stayed with the Hokies for 10 years.

It is unclear how much Henrickson will make at Kansas, however in recent years KU has offered the same base salary to its men's and women's basketball coaches. Men's coach Bill Self earns a base salary of $129,380, as does football coach Mark Mangino. Washington received the same deal. Incentives, endorsements and a radio show are expected to sweeten the deal.

Renate Mai-Dalton, a KU business professor and longtime women's basketball supporter, said she thought Henrickson's experience and steady success while coaching in the hard-knock Big East made her an appealing choice.

"I'm sure that's one reason Lew Perkins chose her, because we need someone who has experience in a rugged conference," she said. "We're all having an open mind about her, but it will be very hard to fill coach Washington's footprints."

Mai-Dalton said she wanted Henrickson to have the same genuine care for her players that she said Washington had.

"What I do hope very strongly is that she keeps up coach Washington's tradition of looking at the students as people first and athletes second, and tries to develop them as people of good moral conduct," she said. "We've build a tradition of a clean program, and we need to keep that going."

Henrickson was hired at Tech in 1997 to take over a struggling program that went 21-38 in the previous two years. Under her direction, the Hokies doubled their win total and went 22-10 during her first season.

Henrickson always challenged her team with rigorous schedules, but continually was successful. In fact, the Hokies went 23-8 this year despite playing teams such as Villanova, Virginia, Boston College, Notre Dame and perennial powerhouse Connecticut -- which has won three of the last four national championships.

She inherits a Kansas program in a similar tailspin. The Jayhawks have posted a 5-43 record in the Big 12 Conference during the last three seasons.

Weaver said character wouldn't be an issue -- Henrickson had plenty of it. He said Tech's players were "pretty devastated" by Henrickson's departure, and Weaver sounded somber discussing it, too.

"You'll see a person who's a great ambassador for the university, someone that's a first-class individual," he said. "She always conducts her business with honesty.

"I think she'll continue to be the way she's been here ...," he said, pausing with a sigh, "which is someone you want to be in your program for a long, long time."