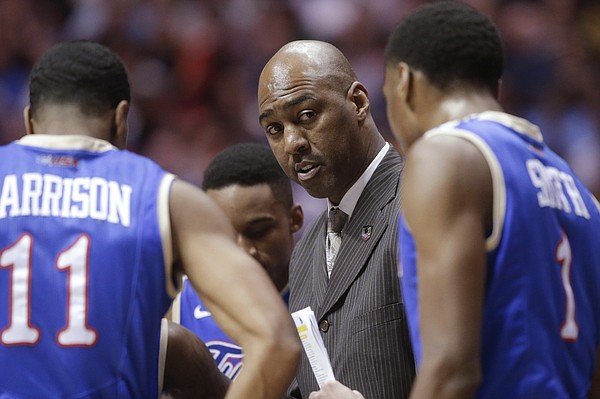 Tulsa coach Danny Manning, center, talks to players during a timeout against UCLA in a second-round game in the NCAA men's college basketball tournament Friday, March 21, 2014, in San Diego.

According to multiple reports, including one from 247 Sports Maryland site InsideMDSports and another from The Baltimore Sun, KU legend Danny Manning is joining Mark Turgeon’s coaching staff at Maryland.

Manning and Turgeon were teammates at KU for three seasons, from 1984-87.

Manning will take over for former Maryland assistant DeAndre Haynes, who recently left the program to join Shaka Smart at Marquette.

Manning was on the Kansas staff in various roles from 2003-12 and he left KU for head coaching gigs at Tulsa and Wake Forest.

Fired by Wake Forest after the 2019-20 season, Manning spent the past season working as an ESPN college basketball analyst.

Manning spent this past season as an analyst at ESPN after Wake Forest parted ways with him following a 13-18 year with the Demon Deacons in 2019-20. His impending hire was reported last week by InsideMDSports.

While at Wake, he helped current Atlanta Hawks standout John Collins develop into a first-round pick.

There had been some hope among the Kansas fan base that Manning would return to KU after Jerrance Howard left for an assistant coaching position at Texas. But Kansas coach Bill Self quickly filled the role in-house with Jeremy Case for the short term and said at the time that he was in no hurry to fill the position permanently and could go well into the summer before doing so.

What's this say about Bill Self & Danny Manning's working/professional relationship?

Probably nothing. I think that Self is looking for someone longer term, and Danny wants to get back in the game to try and get another head coaching job in the next couple of years. Likely more of a function of timing versus anything else, despite what others may imply below...

Unless you were on the inside I think anything one could imagine would only be speculative ignorance.

It means that Danny knows that Billy is a scummy pile.

Maryland....soon to become Big Man U.

Danny, the most important Jayhawk of all time.

Off to Maryland while we have to endure a cheating, toupee-wearing, rec league champ. This is what happens when the Brownback committee chooses a piece of dust as chancellor.

Girod is an idiot.

Let us hope that the search firm did its job and got us an AD that knows how to do a simple and easy task: hire a football coach.

Self wants to hire a big-time recruiter. Manning is not that. Plus, Danny needs to find a head coaching job. He is worthy.

Danny was a good assistant and Self helped him get his first HC job. Self supported him throughout his coaching years. In order to get better, Danny needs to learn coaching from another HC, and he found a solid one. Manning could get another opportunity, but needs to get better aa a HC.

It’s funny that a day ago it was Coach Self’s fault for not having hired Danny already.

Maybe what this means is that old teammates are still good friends and interested in working together. Good hire by Turg.

I grew up in Kansas and am a hard-core, life-long Jayhawk. Due to Navy and follow-on career, I've lived in Maryland for many years. Have never followed Maryland basketball. But with Danny and Turg leading the Terps, I will be paying more attention to what's happening in College Park.

Good on Turg for hiring Danny. They should be a great team.

I agree Jim, I am a West VIrginia Jayhawk surrounded by Mountaineer Fans.