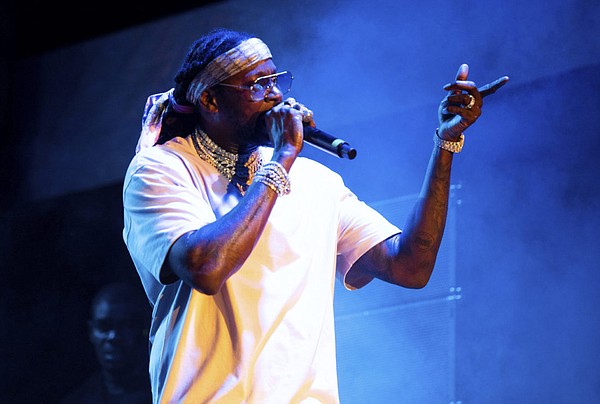 2 Chainz performs on stage at ONE Musicfest on Sunday, Sept. 9, 2018, in Atlanta. (Photo by Paul R. Giunta/Invision/AP) by Matt Tait

The recent tradition of bringing a big-name rap star to Late Night in the Phog to help kick off another Kansas basketball season appears to be alive and well.

And it was KU’s football coach, of all people, who dropped the announcement.

Speaking about the hype surrounding the week ahead for Kansas athletics on his regular Hawk Talk radio show on Monday night, David Beaty revealed that famed rapper 2 Chainz was coming to Kansas for Late Night.

“We've got the Homecoming parade on Thursday,” began Beaty, whose team will take on Oklahoma State at 11 a.m. Saturday in its 2018 Homecoming game. “Obviously, Late Night on Friday, which is extremely exciting. I think 2 Chainz is going to be there, which is a big deal, you know.”

And with that the mystery surrounding this year’s guest was gone. A source with knowledge of KU’s entertainment plans for Late Night told the Journal-World on Monday night that they, too, had heard 2 Chainz was coming.

In addition to continuing the trend of welcoming popular rap stars to Late Night, the addition of the 2017 Grammy Award winner for Best Rap Performance (for "No Problem" with Chance the Rapper and Lil Wayne) to the Late Night lineup makes sense for another reason.

2 Chainz has strong ties to Adidas, which not long ago released a shoe — dubbed the Top Ten Hi “2 Good 2 Be TRU.” — inspired by the name of the rapper's first headlining tour and the company's collaboration with the Georgia-based rapper.

Beyond that, 2 Chainz — aka Tauheed Epps — also has a college basketball past. From 1995-97, Epps played on the Alabama State University basketball team, averaging 2.8 points and 1.6 rebounds in 4.5 minutes per game during his two seasons with the program.

Throughout his post-basketball, musical career, 2 Chainz has written and performed a number of hits that opened in the top 50 of the Billboard Hot 100, with a few climbing into the Top 5.

He follows 2017 guest Lil Yachty and 2016 guest Tech N9ne as the most recent rap stars to perform at Late Night and figures to be a huge hit for the college students, athletes and recruits in attendance.

The Jayhawks, who will put the finishing touches on this year's Bill Self boot camp on Tuesday morning and officially will begin practicing on Wednesday, also have been busy preparing for the usual skits, performances and team scrimmage that also are a huge part of every Late Night.

Stay tuned throughout the week for more on Late Night 2018.

Not impressed with 2 Chainz. Now, get Bruno Mars, then I'd be impressed. Bruno is an entertainer.

Doesn't matter if we're impressed, it only matters if the recruits are impressed.

Positive music from LeCrae and TobyMac would've been more impressive than these gangstas-wanna-bees rappers. It's so sad..