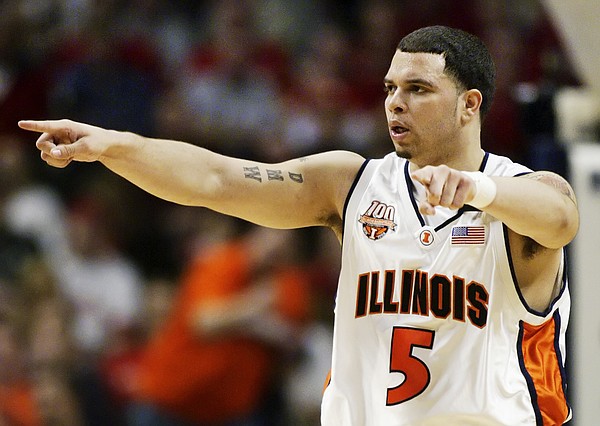 Illinois' Deron Williams directs his teammates in the second half against Wisconsin during the championship game of the Big Ten tournament Sunday, March 13, 2005, at the United Center in Chicago. (AP Photo/Michael Conroy) by Matt Tait

Kansas coach Bill Self has coached and recruited a couple dozen supremely talented players who went on to enjoy success in the NBA and beyond during his coaching career.

In the past month, one of those helped five-star guard Quentin Grimes, a 6-foot-5, 190-pound combo guard from The Woodlands, Texas, who committed to and signed with Kansas on Wednesday night.

In the press release announcing Grimes' signing, Self said the newest Jayhawk reminded him a lot of Deron Williams, whom he had recruited and coached at Illinois.

Williams, you may remember, was an All-American at Illinois, earned multiple all-Big Ten honors, led his team to the NCAA championship game in 2005 and became the No. 3 overall pick in the 2005 NBA Draft.

So, obviously, that kind of comparison qualifies as high praise for Grimes, who Self actually said was a better scorer at the same age than Williams.

The news was nothing new for Grimes.

“He tells me that all the time,” Grimes said with a laugh.

But the Williams-Grimes connection did not stop with Self simply explaining how the two were similar.

“I actually talked to Deron Williams probably two, three weeks ago, and he just explained to me how much he loves Coach Self and how I would fit in great with their program,” Grimes said. “It was kind of a wow moment because I got to pick his brain a little bit, ask him a few questions about Coach Self and also about non-Kansas stuff like the NBA and find out what you have to do to get your game ready for that next level.”

As for what he asked Williams about Self specifically, Grimes said he just appreciated the opportunity to run KU's recruiting pitch by someone who had been in his shoes before to see if the pitch and actually playing for him matched up.

“I asked him a lot,” Grimes said of his phone conversation with Williams. “How is Coach Self on the court, off the court, if he really lets you play your game. And he kept it real with me the whole time so that was kind of another big factor that went into my decision.”

While the Williams comparison is somewhat new to Grimes, looking to NBA stars for help with his game is not. Although he's never had the chance to get them on the phone, Grimes named four NBA players — three current and one past star — as players he looks to when trying to develop and piece together his own individual game.

“I kind of look at a lot of players,” Grimes said. “I like to look at Penny Hardaway. I like the way Chris Paul can control a game. I'm watching Russell Westbrook, the way he attacks and I watch James Harden, the way he kind of lulls defenders to sleep and also can get to the bucket and make plays for his teammates.”

Now that Grimes has signed with Kansas, he can add Williams to that list and actually get some of the same coaching that the three-time NBA All-Star once got. 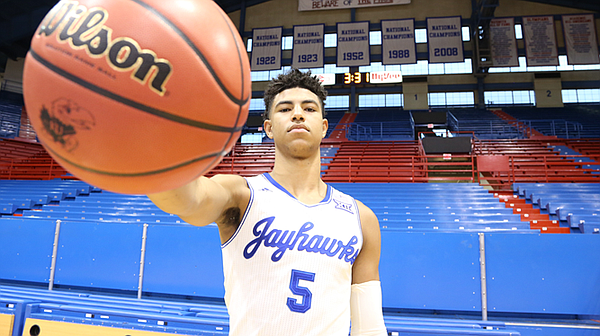 Five-star guard Quentin Grimes, from The Woodlands, Texas, signed a National Letter of Intent to play men's basketball at the University of Kansas on Wednesday, Nov. 15, 2017. by Photo Courtesty of Kansas Athletics

What are our scholarships looking like for next year? Can we add Langford and/or Williamson? If so, what do you think the odds of us landing one of them or even both? I know Grimes already mentioned he's going to start doing some recruiting for KU.

They have more to give and they would certainly love either of those players but I'm not sure if they'll get either of them. Getting both is probably completely out but one or the other remains possible.

Most seem to think Zion's headed to Kentucky and Romeo will go to Indiana, but KU's not out of either one just yet.

Either way Self is a Magician. He ALWAYS figures something out. I mean we go into this season with a scholarship on the table and now we may have De Sousa in December. Not sure many people could have predicted that. And then this class for 2018-19 is already outstanding and we still have until April/May when the next signing period ends.

Looks to me with Grimes, KU is one over the limit assuming no one leaves for the NBA after this season. So if both Dok and Malik leave for the 2018 draft, then we have room for one more.

I know it's dreaming, but wouldn't that be a heck of a roster!! Coach Self could swap out entire lineups - Team A comes out and Team B goes in and hardly any drop off of talent!! I know, I know.... Dreamin'... lol

really though, if you expect both vick and dok back then we probably didn't end the season well. I see at least one of them leaving if not both. vick is a monster that is getting better at controlling his explosiveness to finish. dok is dok, 'enuff said. i could see him taking advice at the end of the year from self due to the way the league is treating big men. okafor, nerlin, the list goes on. it may be worth it for him to wait a year until the league figures out a spot for post bigs.

We have one available and that number could change depending on who goes and stays along with if De Sousa is allowed to join the team.

Williamson, IMO will stay home. Clemson, South Carolina, or UNC. Mom wants him to stay closer to home and is a fan of Roy.

Langford is up in the air. No real, clear cut favorite here. IMO, it will be between KU and Indiana.

I personally think that Williamson goes to Kentucky and Langford to Indiana and we end up with another graduate transfer to fill in an open scholarship. Glad Grimes is helping on Recruiting both guys, as I think Williamson is a fan of Doctson and KU. Wouldn't be upset if he ended up at NC or SC though.

I'm confused. I thought it was a recruiting violation to have a former player call a recruit? Do we have any idea how the call came about?

my guess is that the rules changed when they got rid of some of the limitations on when/how many times coaches can contact recruits.

Seems like probably 4 years ago or so the NCAA decided to remove some of the restrictions on recruiting contacts due to the prevalence of text messaging/social media contacts now.

I don’t think it’s a violation....Magic Johnson called Josh Jackson to try and persuade him to stay home and go to Michigan State

Is it a coincidence that both Deron and Quentin wear #5?

Yes it is coincidental. Q has been wearing #5 since his freshman year in HS, which was his first varsity HS season.

someday you're going to have to write a story about yourself. you know everything. i've been following you for years but know nothing.

Suzi was just answering the question. She is an expert on Texas high school sports and the KU rumor mill! Lets try to stump Suzi, Deron Williams grew up near Dallas, but Name the State of his Birth Place (Hint - A big 12 school)?

Understandably, Nobody cares but Ed. The Answer is West Virginia!