Thomas Robinson then and now: One and the same? 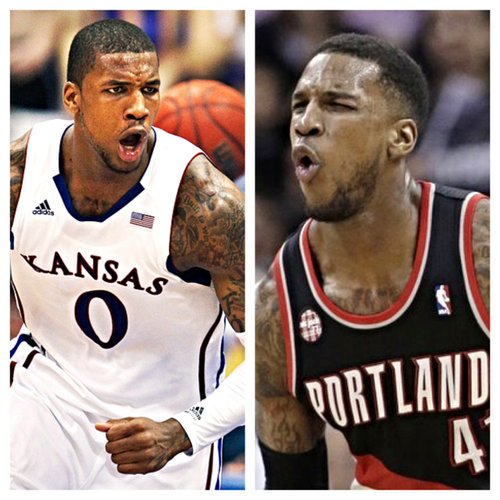 Former Jayhawk Thomas Robinson has found a role with the Portland Trailblazers that is similar to the one he had as a sophomore at Kansas. by Matt Tait

If you've been watching any of the NBA Playoff series between Portland and San Antonio — particularly Monday night's game — you might have had a moment or two where you thought you went back in time to the 2010-11 Kansas University basketball season.

That was the year before Thomas Robinson became an All-American and automatic double-double — the year when the sophomore's minutes were limited because of the stacked crop of big men who played ahead of him but his impact, minute-for-minute and pound-for-pound, was nearly as meaningful as anyone else's on the team.

The colors on his jersey might be different these days, but Robinson today looks and plays an awful lot like Robinson as a sophomore at Kansas.

That year, Robinson averaged just 14.6 minutes per game and had trouble staying on the floor because of consistent foul trouble — largely because of all that unbridled energy — and the presence of Marcus and Markieff Morris dominating big man touches and minutes.

This year, for Portland, Robinson is averaging 12.5 minutes per game, which is a smaller percentage of the game (26 percent with Portland vs. 37 percent as a sophomore at KU) but about the same amount of time to do what he does, which is raise the energy level of everyone in a Trailblazers uniform by flying around, pursuing every rebound and loose ball with reckless abandon and playing generally like a mad man possessed.

Robinson, in case you haven't been watching, still owns that passion and raw emotion that he flashed for three seasons at Allen Fieldhouse. He celebrates demonstratively after a big bucket or play, winces in pain after a tough call and communicates with his teammates in a number of different ways throughout his time on the floor.

Most nights, that's a good thing and it brings a lift to the entire Portland bench. Monday night, it definitely was, as Robinson scored 9 points and grabbed 5 boards, 1 steal and 1 block in 24 minutes while helping Portland extend their season by cutting the Spurs' lead in the best-of-seven series to 3-1.

When he checked out of the game for the last time with just over five minutes to play, Robinson, who already is on his third NBA team, got a standing ovation from the Portland crowd, which might have had Robinson himself flashing back to his days at KU.

Just for grins, here's a quick look at some of Robinson's numbers from then (2010-11) and now (2013-14), which show that, although his game has come a long way from when he first stepped foot on campus at KU, Robinson is still valued most for his energy and effort during the short stints he's on the floor.

T-Rob is still one of my all time favorite Jayhawks, along with Darnell, Sherron, Nick and Kirk. That's some kind of push and attitude.

He will always be my favorite KU ball player. You just can't help but love him.

Wish we could have had T-Rob and Embiid playing the same time...

OMG!! Can you imagine the devastation on the boards??!!

Heck, probably their biggest rivals would be each other!! :)

TRob was the most energetic, explosive, and fun player I have ever seen put a Kansas University Jersey on. What a fun player he was and still is today to watch grow, I still remember that tremendous comeback against Missouri to end the Border War. THE BLOCK!!!

That was a play to remember, for certain!

--He didn't block it out of bounds.

--He didn't block it toward a teammate.

--He didn't block it toward an opponent.

He blocked it through the shooter.