Marcus Morris has arrived in New York City and the twins are starting to kick off their final night before learning their NBA fates.

Most of the official NBA requirements wrapped up late this afternoon. Angel Morris, Marcus and Markieff's mother, attended a seminar for NBA families around 5:30 and now the twins are regrouping in their room and planning how to spend the evening.

For the most part, it seems as if it'll be a low-key night. Markieff insists that he's not nervous and his demeanor serves as proof. He's been smiling all day and has looked very comfortable with what's going on around him every step of the way.

He keeps talking about feeling blessed to be here and fortunate and the way he's carrying himself illustrates that he's not just saying that. He means it.

Hoping to catch up with both twins one more time before the night's over. Then it's on to the waiting game. Safe to say tomorrow will be one of the longest days of their lives, just waiting to hear there names called by NBA commissioner David Stern.

Players are scheduled to arrive at the Prudential Center two hours before the first pick is made. When they do, they'll pose for photos, meet sponsors and go through a few more required appearances like that. Then it's into the green room until they hear their names called.

I'll have more throughout the day tomorrow via Twitter and also will be live blogging the draft — at least until the time the twins are selected. The rest of the KUsports.com crew also will be chiming in with draft coverage from the home front.

KU coach Bill Self is going to be in the green room with the twins tomorrow night. No word whether Josh Selby is in New York or if he will be here tomorrow night. I'll keep trying to track that information down.

Your best bet for info throughout the day tomorrow will be to by follow me on Twitter.

Also be sure to check out KUsports.com tomorrow for my story on Markieff's day in the city.

Markieff is in the middle of an NBA Cares event right now along with other potential first round draft picks, including Jimmer Fredette, Kemba Walker and Derrick Williams. 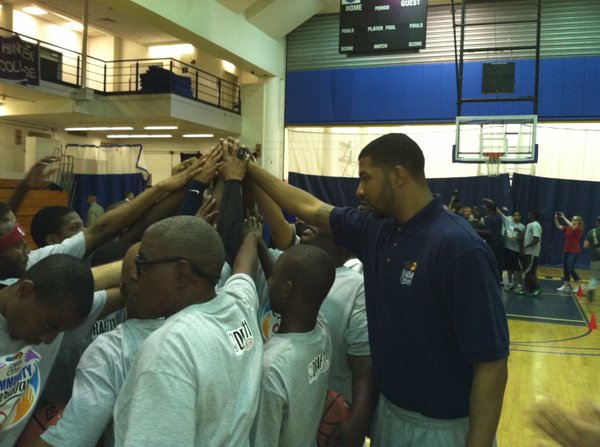 Markieff Morris huddles up with participants at an NBA Cares event in New York on Wednesday, June 22, the day before the 2011 NBA draft. by Matt Tait 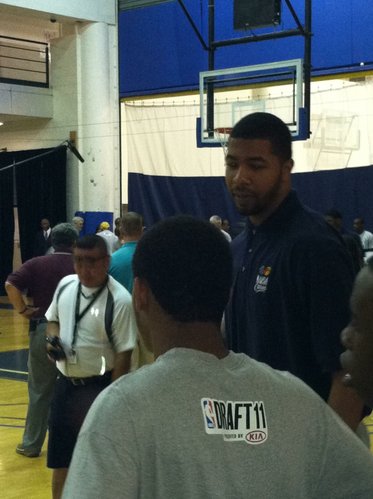 Markieff Morris talks with a participant at an NBA Cares event in New York on Wednesday, June 22, the day before the 2011 NBA draft. by Matt Tait 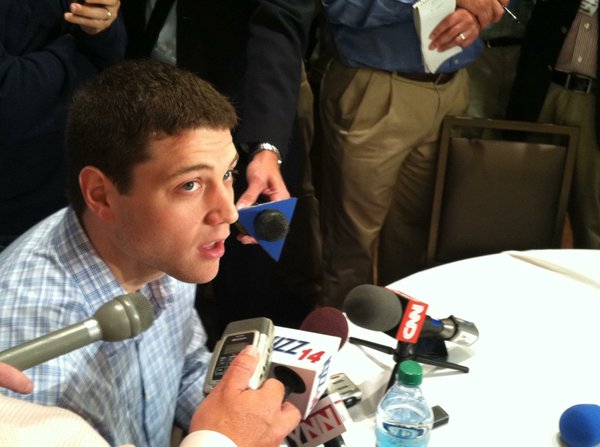 Jimmer Fredette speaks with the media at an NBA Cares event in New York on Wednesday, June 22, the day before the 2011 NBA draft. by Matt Tait

Markieff addressed the media at the NBA Draft media day, discussing his decision to leave Kansas and what the transition has been like so far.

Markieff Morris not intimidated by NBA by Matt Tait 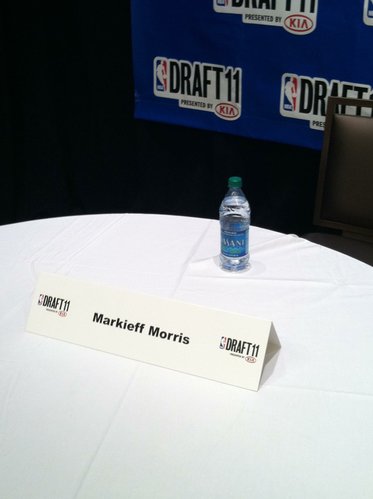 Markieff Morris will sit at this table in "The Green Room" during the 2011 NBA Draft in New York. by Matt Tait 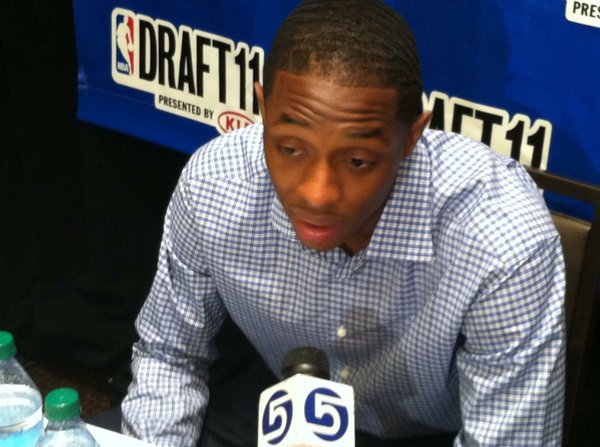 Just waiting on the media sessions to start. Markieff will be in Group B and will go from noon to 12:30. Marcus is not in NYC yet, he's working out in Charlotte, which gives a lot more legitimacy to the idea of the Bobcats picking him at No. 9. He will be here this evening and I'll catch up with him then.

Until then, I'll be spending the next several hours w/ Markieff in the Big Apple. So check back throughout the day for videos and photos from NBA Draft 2011.

By now, you know that Marcus and twin brother, Markieff, hail from Philadelphia and are proud natives of the city of brotherly love.

And for the last three years you’ve seen these guys transform from inexperienced, oversized freshmen into two of the best players in college basketball.

Now, it’s time to see them in their element.

Journey with me to New York City, where I’ll spend a day in the life of the Morris twins and show you just what these guys are like in their home environment of the east coast. For the next several hours, I’ll bring you photos, videos and running updates of what the twins are doing, who they’re meeting and what they’re thinking one day before they hear their names called at the 65th annual NBA Draft — 6 p.m. Thursday at Prudential Center in Newark, New Jersey.

For all of the players eligible to be drafted this year — and every other year, really — this is a special time for them and their families. Dreams will be realized, goals will be achieved and, without question, a few tears will be shed.

For the Morris twins, the next couple of days figures to provide all of that plus a little more.

As Marcus and Markieff progress toward that inevitable day when they no longer can call each other teammates, a bunch of different emotions figure to rise to the surface. For a while, the buzz and excitement of being in the draft likely will keep those emotions subdued. And that’s where we come in.

Throughout the day, I’ll track the memorable moments that lead up to the time when each player hears his name called at Thursday night’s draft by NBA commissioner David Stern.

We’ll start with the 11:30 a.m. media session at the Westin Times Square and, from there, journey out onto the streets of the Big Apple, where Marcus and Markieff hit this stop and that on what surely will be one of the busiest — and at the same time fastest — days of their lives. 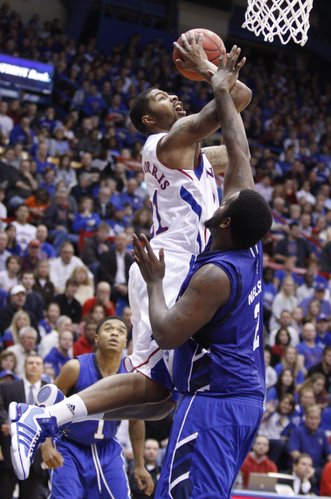 The next day, we’ll take you into the draft room at the Prudential Center, where I’ll be live blogging the draft — at least until the time the twins are taken. The rest of the KUsports.com crew will chip in to Thursday’s blog from Lawrence to make sure you’re up to speed on the latest from this year’s draft.

For grins, and to kill time both while you wait and while I flew out to NYC, I’ve thrown together a quick mock draft in five words or less of this year’s first round. Look it over if you want, or simply sit back and wait for the updates to start rolling in. Check back often throughout the day for the latest on the final day in the lives of the Morris twins as amateur athletes.

In addition to checking out KUsports.com all day, you also can track what’s happening throughout the week by following me on Twitter.

If mock drafts aren’t your thing, there’s still time to sign up for our 2011 KUsports.com NBA Draft contest, where predicting the draft spots of the Morris twins and Josh Selby can land you a sweet prize.

To enter, make sure you’re signed up for a KUSports.com account and ENTER THE CONTEST for a chance to win a $100 gift certificate for some new KU gear.

Copy my picks below at your own risk. 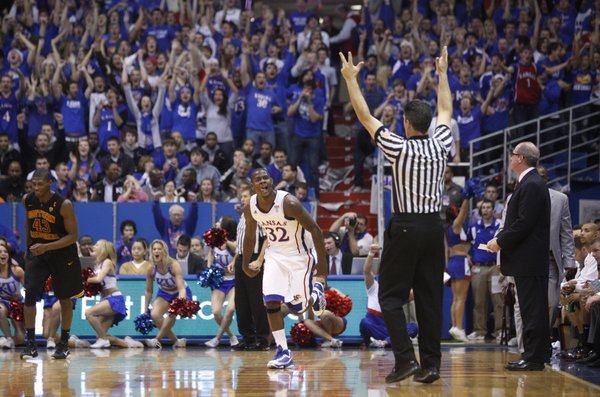 Kansas guard Josh Selby licks his chops after hitting a second three-pointer against USC during the first half, Saturday, Dec. 18, 2010 at Allen Fieldhouse. by Nick Krug

Good luck to the Morris twins and Selby!

That was probably a "courtesy" projection by Tait.

Ringing out loud and clear, at least for me.....TRob made the right decision. Second round would have been his destiny this year. He'll only help his stock by puting his team on his back this season and jumping in with the crowd of big men in the first round next year in New York.

I know everyone believes Cleveland will take Kyrie #1 and probably Kanter #4. I think this is a mistake. Williams is way better than Kanter, and Walker will be a great point also. I would go Williams #1 and Walker at #4. I have to think Williams and Walker is a better combination of players that Irving and Kanter!!!!

Williams #1 and hope that Lamb is available #4 is what I have heard.

Interesting predictions. Because of all the hoopla surrounding him this past season, I'm a little surprised by where you placed Jimmer, I had the feeling he would be a top 10 pick. Best of luck to Marcus, Markieff, and Josh, I hope your dreams come true.

Jimmer is a great shooter, but scouts seem to be wondering just how good he is at doing anything else.

Interesting if Markieff goes before Marcus.

Maybe I missed this, but isn't it sacrilege for a Philly kid to wear a Yankees hat, not to mention dangerous?

That picture is of Brandon Knight, not Kemba Walker.

Thanks. It's been fixed.

Dear lord. This is a weak draft class all around.