With postseason just ahead, David McCormack needs to put inconsistencies behind him 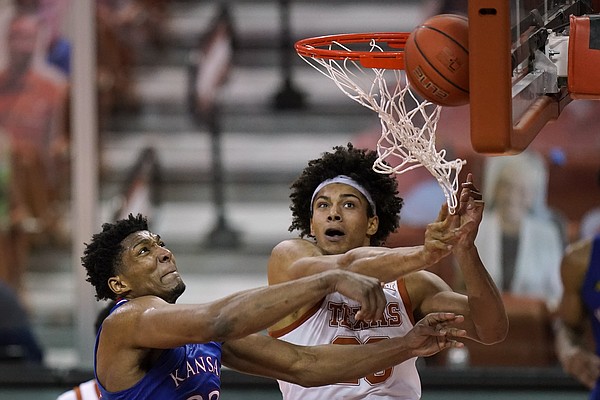 As pivotal a role as David McCormack has played in Kansas turning its season around, the time has come for the Jayhawks’ veteran big to make one last step in his progression and put his inconsistencies behind him.

Lapses in judgement and execution from McCormack cost KU in what could’ve been a signature road win, but ended up as a 75-72 overtime loss at Texas on Tuesday night.

Plagued at times this season by fluctuations in his effectiveness, the broad range of the McCormack experience was on display in Austin, Texas. The good. The bad. The “What was that?”

Offense rarely has been as problematic for McCormack late in the season as it was earlier in his junior year. The Jayhawks took an early lead in OT when he wisely passed out of the post to hit Christian Braun for an open corner 3-pointer. A few minutes later, after McCormack poked away the ball on defense for a steal, he had one of his most impressive one-on-one post moves in Big 12 play, going at Jericho Sims, a superior athlete, and scoring over Sims’ near perfect defense with a jump hook.

KU led 72-70 with 1:37 left in overtime. But the Jayahwks wouldn’t score again. In part because McCormack, who draws a ton of attention from the defense even when he’s not the one taking the shot, fouled out 10 seconds later.

Matt Coleman III and Sims were poised to run a ball screen together out on the left wing, when Coleman opted instead to attack off the dribble toward the baseline. Coleman clearly had an angle on KU’s big man and McCormack lost control while trying to make up ground (even though he had help defenders behind him) and he bumped the speedy UT guard, fouling out in the process.

“David’s foul was not smart at all,” KU coach Bill Self said afterward. “I don’t know what he was thinking about, running up to guard Coleman like that. All he’s got to do is just channel him off and keep him on the side and let him turn the corner.”

McCormack only played 24 minutes in a game KU’s other four starters all logged 38 or more because he got himself in foul trouble immediately at Texas, getting called for his second foul 3 minutes and 12 seconds into the action.

Those early whistles sent him to the bench, and he wouldn’t return until the start of the second half. A few minutes after getting back in, an inconceivable missed dunk by McCormack at the 17:16 mark, which would’ve made KU’s lead 10 points at the time, seemed to be a turning point. Whether the shock of seeing the 6-foot-10 veteran brick an uncontested two-handed jam off a pick and roll sent the Jayhawks into a stupor or invigorated the Longhorns, KU only made one field goal in the six-plus minutes that followed and Texas tied the game before a Marcus Garret layup ended a 1-for-10 shooting stretch that was accompanied by four turnovers.

Even with his snags, McCormack would score six of his 12 points in the final seven minutes of regulation, and he made overtime possible with a putback on the offensive glass in the final seconds of the half.

The glitches in McCormack’s game against Texas weren’t the only problems that led to the KU loss, of course, as Self brought up during his postgame video press conference when the blown dunk came up.

The coach said all of that just to bring up a larger point about how McCormack actually is capable of better than what he showed at Texas.

“But we’ve got to get our bigs playing big. I mean that’s the bottom line. David’s done a pretty good job with that offensively, but we’re still not rebounding the ball,” Self said.

“Jalen Wilson can not be our best rebounder each and every game,” Self went on, referencing the redshirt freshman consistently doing better on the glass (seven consecutive games leading KU in rebounds). “We’ve got to have some big guys getting some of them.”

Wilson is KU’s best rebounder. So that’s not going to change. What Self really was saying is that he wants more out of McCormack. Self knows KU can’t afford any glaring inconsistencies from its most effective big during the postseason, or the Jayhawks’ stay in Indiana for the bubble-esque NCAA Tournament will be a short one.

Now that McCormack has proven he can play at an All-Big 12 level when he’s at his best, Self is holding him to that high standard. That’s totally fair. KU’s loss at Texas, though far from a doomsday result, served as another reminder that the Jayhawks (17-8 overall, 11-6 Big 12) will only go as far this March as McCormack can take them. When he has an off night, the chances of them piecing enough together to defeat an NCAA Tournament level team diminishes.

McCormack doesn’t have to be flawless — and he won’t be. But he does have to be on the court, because the Jayhawks are better overall when he’s out there in most scenarios. KU did put together an impressive run in the first half with five guards when McCormack sat. Overall, though, Texas outscored Kansas, 39-35, during the 21:25 that he was off the floor. KU’s starting five — McCormack, Garrett, Braun, Wilson and Ochai Agbaji — played together for 22:09 at Texas and held a 37-34 advantage.

KU isn’t going to win any shootouts in the NCAA Tournament. If the Jayhawks want to make some noise, they’ll need to win games on defense by making opponents uncomfortable. KU can only do that if McCormack is playing major minutes, occupying the paint and taking a smart approach to contesting and altering shots.

McCormack has shown over the course of the season he can provide KU with a bit of everything. The final piece of the puzzle is doing it all with a steady regularity. More balance. No erratic dropoffs. Avoiding foul trouble and long stretches on the bench will make that all the more achievable, too.

Better for KU and McCormack for him to learn that lesson now, than during some heated March Madness game in a few weeks.

It’s not just McCormack - everyone on this squad is inconsistent. This is Self’s worst defensive team in many years. Maybe ever.

Now we all know that you're talking out of your backside. This team is many things, I agree. But the worst defensive team in many years or ever......... uhhhhhhhhh are you just logging in to be a jerk now? Because defense is about the only thing we do well.

Frustration is the operative word here for me. This season has been the most frustrating of any I can recall and David`s inconsistent performance is at the top of the list. His mindless physical contact leading to cheap touch fouls, many far away from the basket, has been tough to understand. His jittery, spastic antics have resulted in dropped and mishandled plays and shots clanging off the rim. How do you miss a wide open dunk and then not get the uncontested rebound? He's a good free throw shooter and yet the ones he misses come at critical times, many being the front end. His shot selection has been woeful, often taking shots without anyone near the basket so it's a make or break situation every time. How many times has his man beat him down the court for a layup? To his credit, he has improved his passing game significantly. He has finally figured out how to set a screen and not get a foul. His help defense has maybe been his best contribution, almost Dom like. We are in trouble if our success depends upon McCormack to be a consistent factor. Hey, we are already in trouble at 17-8 and little hopes for really getting it together and finishing on an upbeat.

True, what worries me even more; based on games we played so far, our bench is one of the worst in terms of productivity. This team is so fragile, it depends on the 5 starters. Any of them got injured, this team wouldn't have made it this far.. We're lucky so far.

On a positive note, I can't wait to see how Bryce Thompson plays in the NCAA Tournament. He is showing signs he could be a guy to step up at critical times and make some big buckets. We are pretty good when the hustle is there, the intensity is turned up and we are aggressive. Unfortunately, we are too easily knocked out of our rhythm and when the ball is not going through the hoop it seems to take too much effort to get shots to start falling consistently and our shot selection gets worse.

Still can be a pretty good finish to the season.