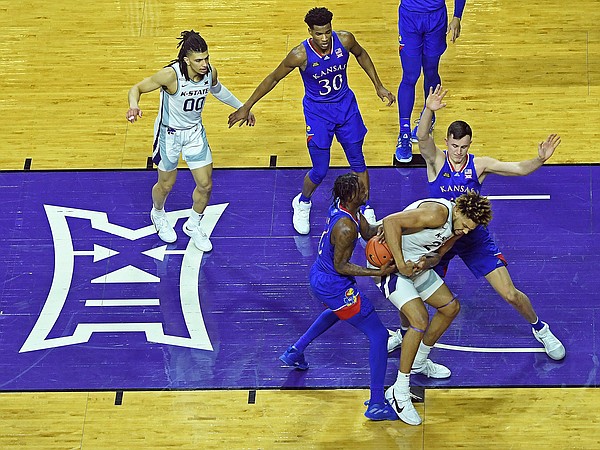 Kansas senior Marcus Garrett helps rip the ball away during a game against K-State at Bramlage Coliseum in Manhattan, Kansas on February 17, 2021. by Scott Weaver

The Jayhawks have looked far from flawless, but the least complicated part of their February calendar is complete. Welcome to the make or break portion of the Kansas basketball schedule.

Now that KU has another aesthetically challenged win over one of the Big 12’s lower-tier teams out of the way, it’s time to find out if the Jayhawks truly are trending in the right direction leading up to March.

Yes, they’re on a four-game winning streak for the first time since December, when they rattled off eight straight following their season-opening loss to national title favorite Gonzaga. But this current string of enhanced play — mostly on the defensive end of the floor — from the Jayhawks hasn’t included a lot of wow factor. And the offense qualified as ugly at best much of the time in their two most recent victories.

With its 59-41 road win against rival Kansas State on Wednesday night in Manhattan, KU (16-7 overall) improved to 10-5 in the Big 12. A solid record in a strong league.

In fact, those four teams account for seven of the Jayhawks’ eight victories in 2021 — the other came, 63-59, against Oklahoma, in Lawrence on Jan. 9. And, let’s be honest, that win over OU occurred before the Sooners took off. Oklahoma was unranked at the time. Senior Brady Manek didn’t play. It was the first game that Elijah Harkless started. The Sooners are 7-1 since, including a 75-68 win over KU in the rematch.

Dating back to that KU win over an OU team that has since emerged as a possible top three seed in the NCAA Tournament, the Jayhawks failed each of their four chances to prove they can go toe to toe with that caliber of opponent. They lost at Baylor (No. 2 KenPom, No. 2 NET), at Oklahoma (No. 22 KenPom, No. 18 NET), at Tennessee (No. 15 KenPom, No. 13 NET) and at West Virginia (No. 16 KenPom, No. 17 NET). Would many teams go 4-0 against that road slate? No. But there’s a long list of college basketball teams that would go 0-4, and the Jayhawks are guilty by association.

Now comes the Jayhawks’ chance to clear their names on the court. Three games left to play, each one of them against the type of quality team they haven’t beaten in weeks. This recent slate of games against Iowa State and K-State were such a foregone conclusion you surely know what lies ahead: Saturday versus Texas Tech (No. 19 KenPom, No. 14 NET), Tuesday at Texas (No. 18 KenPom, No. 22 NET) and Feb. 27 versus Baylor (No. 2 in both).

During their road wins at K-State and ISU in the past few days, The Jayhawks seldom looked like a team capable of handling those upper echelon Big 12 opponents that are to come.

And they certainly know the Wildcats aren’t living in the same college basketball stratosphere this season as the Red Raiders, Longhorns or Bears.

“We’re going to have to play a lot better,” KU redshirt freshman Jalen Wilson said of the upcoming stretch. “The things that we get away with in some of these games is not going to work for other games.”

In particular, Wilson referenced K-State’s poor 3-point shooting — 3-for-24, a mere 13% — against Kansas. The Jayhawks’ defense only had somewhat to do with those results.

“I doubt that the teams we’re playing next will miss as many 3’s,” Wilson predicted.

While head coach Bill Self said he likes the direction in which his team is headed after KU’s fourth win in a row, and thinks the Jayhawks’ “best ball” is yet to come, he also mentioned on more than one occasion during his postgame video press conference that KU “labored to score” at K-State. That description applied to a 64-50 win at ISU four days earlier, too.

A lot of times, this team just isn’t that fun to watch for most people when its 3-pointers aren’t dropping — the Jayhawks went 4-for-16 at K-State.

Self’s not in this business to entertain those of us in search of artistic offense, though. So that’s part of why he’s feeling upbeat about his team headed into these next three games.

“It will be challenging. When you play the best teams it’s always challenging. But we won at Texas Tech and scored 57 or whatever it was, or 58 (it was a 58-57 road win on Dec. 17). So it’s OK whatever it is. The situation is, we know if the score is in the 80’s, it probably doesn’t benefit us when you’re playing really good competition,” Self admitted. “Because it would be really hard for us to get 80 against really good competition, especially teams that guard.”

He’s been preaching defense and making the opponent play ugly for weeks. Now the Jayhawks will have to make that happen against players far more skilled and effective than the ones they’ve beat up on recently.

“I think our guys are bought in,” Self said of his team’s defensive improvements, especially with how the Jayhawks defend ball screens and help. “And that’s something we’ve been trying to get them to do for a long time. So I’m in no way, shape or form going to diminish what we’ve done, because they’re actually doing exactly what I want them to do, which is learn how to win ugly. And they’re getting confidence playing that way.”

As long as the Jayhawks are more convinced than observers that they can once again beat the types of teams they did earlier in the season, that’s got to be worth something for the stretch run.

Marcus Garrett predicted the Jayhawks are about to show “how tough” they are, and the “fight” that they have.

“I feel like we’ve got the best coach,” Garrett added, when asked about what’s to come, “so we’ll definitely be prepared for those three games. And I think that we’re ready for them.”