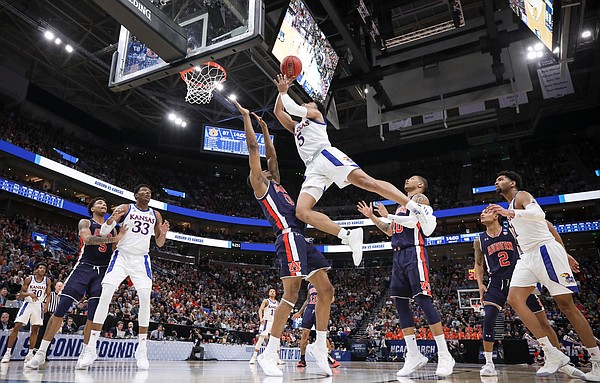 Kansas guard Quentin Grimes (5) gets up for a bucket and a blocking foul on Auburn forward Horace Spencer (0) during the second half on Saturday, March 23, 2019 at Vivint Smart Homes Arena in Salt Lake City, Utah. by Nick Krug

Salt Lake City — Grades for five aspects of the Kansas basketball team’s 89-75 loss to Auburn in the second round of the NCAA Tournament.

Kansas would need some form of life offensively in the first half to keep Auburn within reach, but didn’t come close to accomplishing that.

The Jayhawks’ season was all but over by halftime, after shooting 8-for-27 in the opening 20 minutes and turning the ball over 8 times. A 1-for-10 half from 3-point range derailed KU’s chances of keeping pace, too, as Auburn built an insurmountable 51-25 lead by intermission.

The offense was more tentative than assertive when KU needed to find a way to step up and match Auburn’s intensity.

While KU shot nearly 60% from the floor in the second half, it barely put a dent in the Tigers’ massive lead.

Auburn wanted to play fast and shoot 3-pointers, and the Jayhawks did nothing to stop the Tigers from doing so.

With Bryce Brown burying 3’s out of the gate, the SEC Tournament champions were the aggressors and KU didn’t come up with anything that would make them feel uncomfortable.

The Tigers sprinted to a 34-8 advantage in fast-break points and shot 52% from the floor to advance to the Sweet 16.

No one in a KU uniform was ready in the first half to counter Auburn’s energy. Even Dedric Lawson, who once again finished with a double-double (25 points, 10 rebounds), went 1-for-7 from the floor in the opening 20 minutes.

Freshman big David McCormack got off to a promising start, with 5 quick points, as well as 5 rebounds in the first half. But matchups and the game’s tempo dictated that Kansas had to play smaller, with four guards, and McCormack was the odd man out.

McCormack capped his freshman year with 11 points and 6 rebounds, plus a couple of assists.

Devon Dotson (13 points, 4 rebounds, 3 assists) tried to give KU some kind of spark early on, but couldn’t get going offensively until the second half.

Some defensive missteps by Quentin Grimes in the game’s opening minutes, as Auburn exploded to a big lead, drew the ire of Bill Self.

And Grimes (15 points, 5-for-11 shooting, 2 assists) got most of his stats in the second half, when Auburn’s ticket to Kansas City was basically already punched.

Ochai Agbaji again failed to get out of his late-season slump, going 1-for-5 from the floor and grabbing 1 rebound.

Marcus Garrett, too ill to join the team for Friday activities at the arena, didn’t appear to be back at full health. In 20 minutes, the sophomore guard provided 7 points and 3 rebounds, but seemed a little less quick.

K.J. Lawson was the only other substitute to score, and he put up his 2 points at the free throw line.

Different times. We used to have more players w/Lightfoot's drive but more talented.

No doubt this team has some issues. Earlier in the season Coach Self said the players were not practicing very well. The fact we lost to Auburn is not as important as it continued a trend that this team has had. Texas Tech, Oklahoma, Iowa State, we were blitzed, 1st ten minutes game over.

I am very interested in the adjustments for next year. There will be some. This team as constructed, leaves some things to be desired.

I see only 2 real starters out of this group, Dotson and Lawson if he stays. Otherwise most of the other players are off the bench players and not starers

I only see one real player Dotson. D Lawson is not a good defensive player and is not very athletic. The team as a whole is not athletic. When we run against teams that are, we are run out of the gym. I have said all year we are soft. I noticed yesterday we had 5 defenders playing close in the paint, why? So they could have free reign shooting I guess. With this team we cannot win next year.

Let's don't forget the devastation to the "construction" of this team. From a #1 pre-season team to a team that at least twice had to totally revamp the offense with one of those coming only, what, about 6 weeks ago? So we finish the season starting four true freshmen and a redshirt junior transfer who did not play in the games a year ago. I think given what Bill Self had to deal with this year he did one helluva job. 26-10 worth of a helluva job.

Seriously, we got our ass beat by Auburn in the second round.