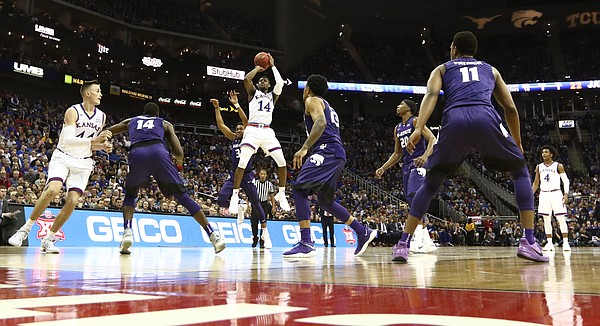 Kansas guard Malik Newman (14) pulls up for a jumper during the second half, Friday, March 9, 2018 at Sprint Center in Kansas City, Mo. by Nick Krug

The Jayhawks only shot 44% from the floor and allowed the Wildcats to hit 53.6% of their shots in the second half, but advanced to the conference championship game for the sixth time in nine seasons.

Here are five stats that stood out — four good for Kansas, one not — in the Jayhawks’ semifinal victory over K-State.

A better opening to the second half would’ve helped the Jayhawks avoid putting the game’s outcome in danger, but they did manage to close the game appropriately.

A key Marcus Garrett steal and layup made sure of that. The freshman’s timely bucket ignited the Jayhawks, who converted 8 of their final 13 shot attempts over the course of the final 10 minutes. Up to that point, Kansas had made just 3 of 12 from the floor in the final half.

Those baskets turned a 2-point Kansas lead into 12 before the Jayhawks spent most of the game’s final 2:00 at the foul line, going 8 for 10.

For the fourth time in the past six games, Kansas out-rebounded its opponent. Not bad for a team that did the opposite in 15 of 16 games before that.

The Jayhawks won the battle of the boards, 37-30. Even more impressive, though, they only let K-State gather 5 offensive rebounds on 32 missed field goals. The Wildcats only managed 2 second-chance points.

Big 12 opponents averaged 14.3 second-chance points a game against Kansas in the regular season and each of KU’s past eight foes scored at least 10 points in that category.

Power of the 3-ball

Both Newman (5 of 8) and Svi Mykhailiuk (4 of 8) routinely exploited the Wildcats for leaving them open.

Between KU’s four regular members of the starting five, each contributed double-digit points in Friday’s win.

A starter in just 4 games this season, Lightfoot added 8 points for the Jayhawks, who also picked up 8 points apiece from backups Garrett and De Sousa.

Newman carried the load offensively, but every other member of the rotation found opportunities to score, too, giving Kansas some balance in its distribution, making the attack less predictable.

No resistance in the paint 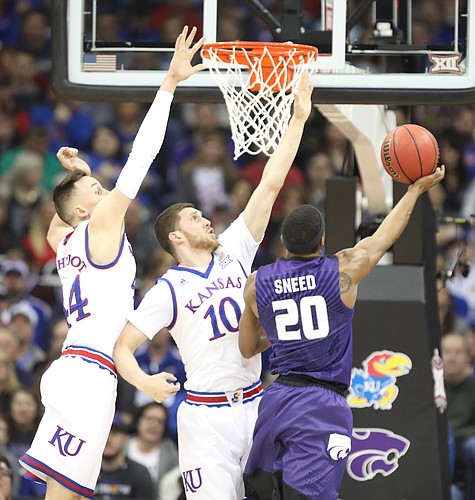 KU typically fares well inside or at least goes toe to toe with opponents in terms of making baskets around the hoop.

The Jayhawks averaged a +7.5 points in the paint margin during the regular season (+2.2 vs. Big 12 foes) and even outscored Oklahoma State by 10 inside without Udoka Azubuike in the Big 12 quarterfinals.

However, the Jayhawks lost the battle for the paint against K-State. The Wildcats scored 42 points inside, matching the most by any KU opponent this season.

Confident in taking their chances against Kansas bigs Lightfoot and De Sousa, the Wildcats finished with a 42-28 advantage in points in the paint, stimulated by Makol Mawien’s 29-point explosion, 16 of which came at the rim. 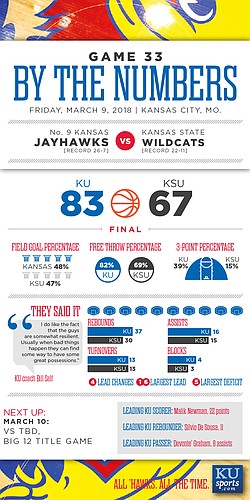 You should not use the term "popped," it makes you sound more like an interior decorator than a sports writer.