Stock watch: Where does Devonte' Graham's NBA candidacy stand after his junior year?

From the moment Josh Jackson decided to play at Kansas, everyone knew he would spend one season with the Jayhawks before becoming an NBA lottery pick. And now that his freshman year is done, we can see Jackson’s a near lock to go in the first three picks this coming June.

The immediate future of KU junior guard Devonte’ Graham — and his whole should I stay or go conundrum — qualifies as far more cloudy.

At various points before and during the Jayhawks’ now completed 31-5 season, Graham’s name appeared on mock drafts near the bottom of the first round and/or hovering close to the top of the second round. At DraftExpress.com, his stock peaked at 28th overall, in October.

However, in a Draft Express projection updated this past weekend, the name of the 6-foot-2 guard from Raleigh, N.C., didn’t appear until near the bottom third of the two-round mockup, with Graham predicted as the 50th overall selection, by the Denver Nuggets.

What’s to be made of him going from a possible first-round pick to the 20th choice in Round 2? It could have to do with Graham’s shooting. 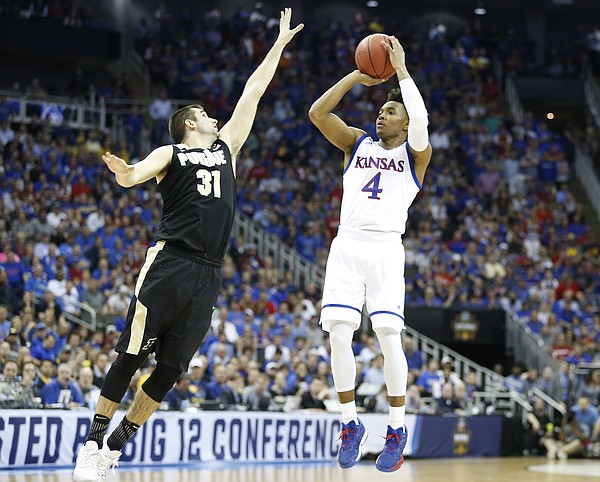 Kansas guard Devonte' Graham (4) puts up a three over Purdue guard Dakota Mathias (31) during the first half, Thursday, March 23, 2017 at Sprint Center in Kansas City, Mo. by Nick Krug

In his third season at Kansas, Graham took 32 more 3-pointers than he did in his first two years combined, but only totaled two more 3-point makes than when you add up his freshman and sophomore numbers. In other words, his accuracy took a noticeable dip.

Here’s a look at his percentages from beyond the arc at Kansas:

Graham definitely has other qualities that will help him as he tries to make an NBA roster, but his 3-point marksmanship a year ago made the idea of selecting a 6-2, 185-pound guard more appealing. Graham’s mark of 38.8% this season wasn’t bad by any means — it currently ranks tied for 52nd nationally — but that 44.1% really made him stand out as a shooting prospect.

We still don’t know whether Graham will enter the draft or return to Kansas for his senior year. He could opt to test the waters without hiring an agent. Should he choose option No. 3, Graham could go to the NBA Draft Combine in May, get feedback on his status from various franchises and determine then what to do next.

A late second-round draft pick isn’t guaranteed anything, so Graham could be more interested in returning to Kansas for the 2017-18 season and another run at a Final Four next March if his stock doesn’t take a jump upward in the next several weeks.

Of course, it’s ultimately his decision, and if Graham is ready to become a professional, Bill Self won’t stop him. The coach only will help his 22-year old guard make the most informed resolution possible.

I would hope he takes the Mason route and digs in for a lot of gym time work this offseason and a trip to Italy. Now that doesn't mean he takes that route but the only drawback is really a potential injury but he doesn't seem to be injury prone. I for one hope he returns and shoots near 50% like Mason did this year. He has a completely different persona than Mason but could certainly lead next year's team. Ought to be fun to see how our team shapes up for next year.

I saw something about Malik Newman considering the draft too. Anyone know anything regarding that?

How close is he for his degree? I'd like to think that's another thing that would be valuable to him (not millions, valuable, but valuable still). He could return and get his degree like some others do, but doing it while getting a chance to shine as the #1 guard for Self and KU would be icing.

I hope Graham realizes that he's not NBA-ready, gets in the gym, improves his shot, and comes back to play and make next year's team his (like Frank did this year). I also hope graduating is a big consideration for him.

I think Graham could become a solid lottery pick by next year, which is a weaker draft as well. I remember before his freshman year, the team had a squad of Marines (or something like that) come in and work with our guys and left saying that of all our players, Graham exhibited the greatest leadership potential. He deserves to give himself the chance to be the undisputed leader of a team, to go out on a much better note than 0 for 7 shooting, and to dramatically improve his first year salary in the NBA. ONE - MORE - YEAR!!

I love Devonte, but even a Frank-like senior year probably wouldn't be enough to get him into the lottery. The lack of size is going to prevent him from going higher than 20th.

has the chance to be the Mason of next years team. He needs another year of leadership and experience. It will be his team next year which will help him mature and improve.

Devonte should come back and hopefully will get solid guidance from scouts and coaches to do so, ala Buddy Heild..

Perhaps, he could have same type of senior year.. we hope..

Rumor mill on Svi is that he may be considering or leaning to go play ball in Europe. Curious if others have heard same and or otherwise. I know the NBA is enamored with European ball players, but his lack of speed is an issue. Would take a special team to bring him on and only for a shooter role (Spurs)

No sign of Malik Newman on any draft boards which to me sounds like he needs to prove himself before the scouts bite on his ability.

I don't have any inside info, but I would not be surprised if Svi left. He would be a great candidate for draft and stash - an NBA team drafts him (probably early 2nd round) to secure his rights, and then encourages him to play in Europe for 2-3 years. Sasha Kaun did this.

A big factor could be the fact that I believe his parents still live in Ukraine. The political situation there is not good. He might be ready to make some money and get them out.

I'm still waiting for the projected 1st round player that shocks us and comes back for another year.

You might be waiting awhile! It would be really cool but too many kids want the millions and who could blame them?

If memory serves me, Marcus Smart returned to OSU after being considered a 1st rounder. Now a lottery pick may be what you're referring to.

Graham will watch Mason jersey displayed next year and can you believe he will want his up there as well.