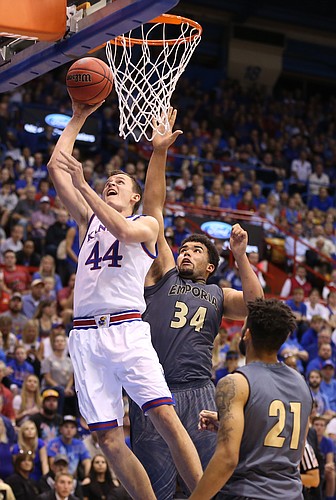 Kansas forward Mitch Lightfoot (44) gets a bucket past Emporia State forward Garin Vandiver (34) and guard Jevon Taylor (21) during the first half, Sunday, Nov. 6, 2016 at Allen Fieldhouse. by Nick Krug

Ideally, Kansas basketball coach Bill Self says, he would like to implement an eight-man rotation this season — something Self was able to do before freshman center Udoka Azubuike suffered a season-ending wrist injury.

On the perimeter, the coach has all the help he needs in Frank Mason III, Josh Jackson, Devonte’ Graham, Svi Mykhailiuk and Lagerald Vick. But down low, Self would love to trust either Mitch Lightfoot or Dwight Coleby enough to have them support Landen Lucas and Carlton Bragg. The coach just is not there yet.

“I would like nothing more than for those guys, for another big, to give us seven to 10 minutes a game — I think that would be very good for our team,” Self said. “Neither one of them are quite ready to do that.”

On the year, Lightfoot, a freshman forward from Gilbert, Arizona, is averaging just 4.1 minutes, 1.2 points and 1.2 rebounds. Through four Big 12 games for Kansas (15-1 overall, 4-0 conference), though, the 6-foot-8 backup has only got off the bench in two games and played four combined minutes.

Earlier this week at Oklahoma — after Bragg picked up two first-half fouls and Self wanted to protect Lucas from picking up a second foul before halftime — Lightfoot entered the game, missed a shot, and committed one foul and one turnover in one minute before Self took him out of the game and decided against putting him in again.

At that point, Self gave Coleby, who had yet to play a minute of Big 12 basketball, a shot. The 6-foot-9 junior, who transferred to Kansas from Ole Miss, grabbed a defensive rebound, got whistled for setting an illegal screen and returned to the bench for good after playing two minutes. 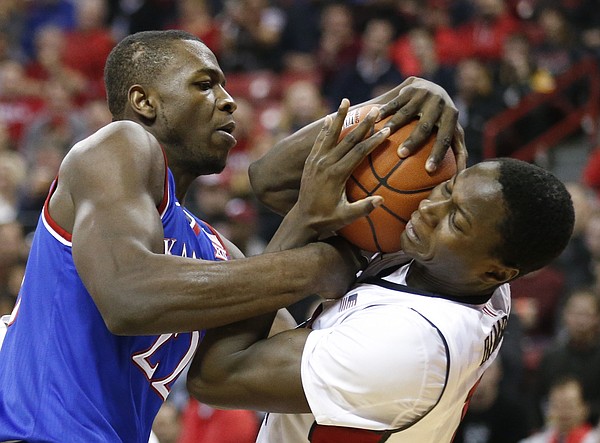 Kansas forward Dwight Coleby (22) wrestles for a ball with UNLV forward Cheickna Dembele (11) during the first half, Thursday, Dec. 22, 2016 at Thomas & Mack Center in Las Vegas. by Nick Krug

The coach wanted to see, on the road with his team struggling at the time, if either Lightfoot or Coleby could give the Jayhawks what they needed.

“And in that little stretch there, it was a really bad stretch,” Self said. “And it wasn't all on them, but coincidentally (the Sooners) were in the game, so they didn't get a chance to play as much.”

So what would Self like to see from either Lightfoot or Coleby (averaging 1.2 points and 2.0 rebounds in 5.6 minutes — and just 10 appearances — this season) that would inspire him to utilize one of them more?

“I would say just being able to carry out defensive assignments and play smarter. There are some things, like Mitch — I want to play Mitch — and he got in the game the other day. It's not that it's that complicated, but we're ball screen defense, in what we call 32. And, you know, he forgot to hedge a ball screen,” Self explained. “The guy just went and made a layup. And you can't have that. It's an easy play. And I think it's not that he can't do it. It's just that he gets excited right now and he's trying too hard.”

KU’s veteran big man, Lucas, knows exactly what his coach is talking about when Self references Lightfoot’s enthusiasm. The senior can’t help but laugh when he thinks about how the freshman’s exuberance manifests itself at practices, where Lightfoot is most involved on the court.

“An example of this is he says everything he’s doing. We’ll be at practice and we’ll joke with him, ‘You don’t have to say, OK, breathe now. Blink.’ Something like that,” Lucas shared. “He says ‘ball fake,’ just everything. It just shows how much he’s trying, which is good. You want guys to try.” 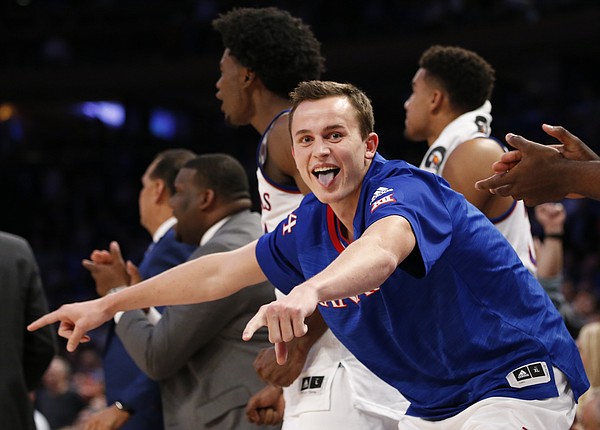 Kansas forward Mitch Lightfoot celebrates a bucket by teammate Frank Mason III during the second half of the Champions Classic on Tuesday, Nov. 15, 2016 at Madison Square Garden in New York. by Nick Krug

It appears Lightfoot is more likely than Coleby to become the eighth man Self wants, because of his activity and athleticism. Coleby, the coach says, still hasn’t fully recovered to the form he showed at Ole Miss, prior to tearing his ACL in late 2015.

“I do think that Mitch has a chance to be a really good player,” Self said. “He’s an athlete, he’s tough. But right now, he’s got to be able to take the practice and do the things that the team needs him to do in the short minutes that he’s in there. And he’s just been a little bit inconsistent with that.”

Lucas, who sees the work Lightfoot and Coleby put in behind closed doors, thinks both have the ability to make a positive impact for KU this season.

“Mitch and Dwight are great bigs. (At) most schools they’re playing a lot. I have a ton of faith in them. They’ve just gotta understand what they can come in and do well for our team during those short periods of time. It took me a while, too. It’s not easy,” said Lucas, who played just 4.9 minutes a game as a redshirt freshman during the 2013-14 season. “You kind of get out there and expect, you start thinking, ‘OK, maybe I’ve gotta make a couple shots to stay in the game for longer or prolong my time,’ but that’s not how it works, you know. If you want to go out there and stay out there, everybody else around you has to be better — the team has to be better — and you have to extend the lead or come back, whatever the case is.”

Self thinks Lightfoot will perform better once the coach can put the freshman in a game and keep him in for extended minutes — a scenario that could play out the next time Kansas builds a significant second-half lead.

Lucas envisions his young teammate improving, too, by making the best use of his feistiness.

“But the next step is, all right now, concentrate that on the right things, don’t overthink things,” Lucas said. “It’s better, I’m sure, as a coach, to pull a player’s excitement and stuff back than try to do it the other way. So he has the right mindset when he goes out there, he has the right energy. Now it’s just kind of making sure that he’s understanding and focusing in on what he needs to do and channel all that energy in the right places.”

IMO, Lightfoot is a great project, but currently too small. Right now I like Coleby's big body. I'd actually love to see Dok back with a brace.

On a different note, curious what you experts think.... Right now, would you rather have Josh Jackson or Seldon back for his senior year? Obviously, Josh has more upside for the future, but I'm talking right now.
Don't forget Wayne's 3 point shooting, size, experience, etc. My point is that a great senior like Releford, Lucas, Mason, etc. are nearly just as good as any OAD.

Pretty close, but Jackson has the edge with Blocks and Steals.

Jackson is more versatile, although Selden is the better outside shooter. They're both winners!

Lightfoot, if you want minutes, don't settle for sissy layups or drop-ins or glass, DUNK the freakin ball, big man! I'm tired of watching our BIGS using the glass, or bunny hopping around the basket. I really miss Udoka. Other than him, our BIGS are just a bunch of softies, like stuffed animals. They don't seem to have that hunger & killer instinct. Freakin' useless for offense. Oh, wait, they do help screening or distributing the ball for guards. Pfffh..

Lucas is averaging 12.8 ppg and 4.3 offensive rebounds in Big 12 play. Not exactly "useless for offense."

Self is calling players out individually and collectively. I think Self sees a monster team and doesn't want the bigs to take that away.

What I take from this is that Landon Lucas is going to be a coach down the road.