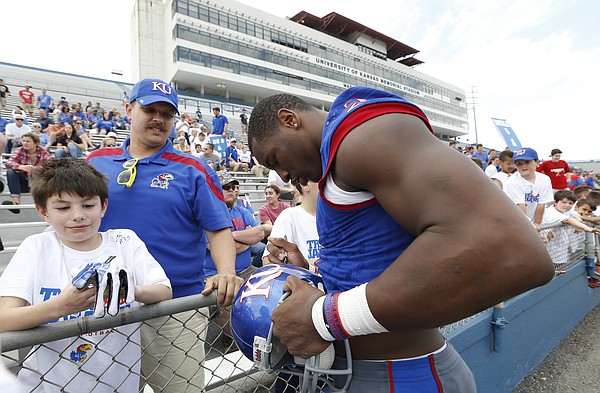 Spring football games are not real football games. And no one understands that better than Kansas defensive stalwarts Dorance Armstrong Jr., and Daniel Wise.

Saturday’s scrimmage at Memorial Stadium was about letting the fans get a peek at the 2017 Jayhawks, not giving away too many secrets or play-calling wrinkles along the way and keeping quarterbacks Carter Stanley and Peyton Bender healthy.

So juniors Armstrong and Wise, two of the program’s most marketable talents, who also happen to be massive defensive linemen, didn’t get to unleash their full array of skills.

It just felt a little different for the big guys who hope to make a living in the NFL by chasing and demolishing QBs.

A 6-foot-4, 246-pound pass-rusher extraordinaire from Houston, Armstrong was credited with four total tackles and one sack. Wise, a 6-3, 290-pound versatile defensive lineman, had two tackles for loss and a sack. Not bad numbers, for sure, but also not true snapshots of how impactful they will be for David Beaty’s third Kansas football team, either.

It must have been difficult for them to exert their typical full game-day effort knowing they would have to pump the brakes if they created themselves a path to a QB, right? Sophomore safety Lee, who spoke with reporters after the open practice, confirmed as much.

“On the sideline, Dorance was really mad,” a grinning Lee reported. “He was like, ‘They keep holdin’ me! I can’t even get a sack!’ He was like, ‘I wish it was a real game, because I’d have a bunch of sacks.’ And D-Wise was just laughin’ at him, like, ‘It’s just the spring game, son.’”

The picture Lee painted gives you an idea of part of what makes Armstrong great: that competitive fire. But neither Armstrong nor Wise could show off at the spring game in the way Lee (six tackles and two crushing hits on receiver Ryan Schadler) or other defenders were able to do.

KU's Mike Lee (@MikeleeKU11) did not have ANY mercy on his teammate during the spring game. YOWZA! #kufball pic.twitter.com/etmIcn3IA4

“It really was a defensive back game, because it’s the spring game,” Lee said. “They can’t touch the quarterback. The ball was being thrown a lot.”

Obviously the last thing any coach or player wants is to lose a quarterback due to a contact injury during a practice or scrimmage — it was only two years ago that a freak play at KU’s spring game prematurely ended Michael Cummings’ career. You’ve got to have those QBs in red jerseys and safe.

And, when you think about it, that’s probably what makes Saturdays in the fall so rewarding for standout defensive linemen like Armstrong and Wise. After months of not being able to do what you were born to do, you get to release those frustrations on an opposing quarterback.

Here’s an early bet that Armstrong and Wise this fall will improve upon their combined 13 sacks and 30 tackles for loss from 2016. 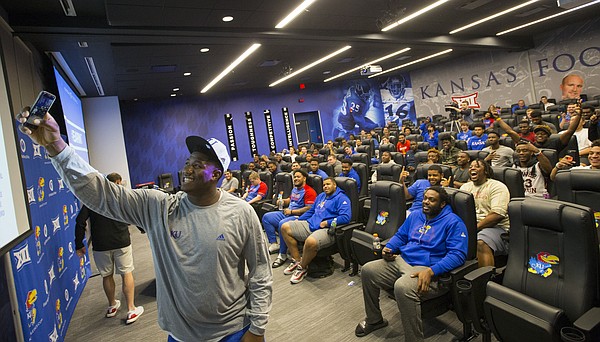 Kansas defensive tackle Daniel Wise shoots a selfie of himself and his team after being selected as the fourth-overall pick during a spring game player draft on Wednesday, April 12, 2017 at the Anderson Family Football Complex. by Nick Krug