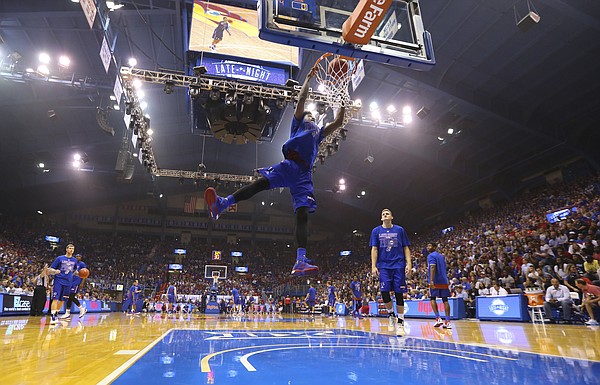 Kansas newcomer Josh Jackson throws down a dunk for the crowd during Late Night in the Phog on Saturday, Oct. 1, 2016 at Allen Fieldhouse. by Nick Krug

We all know the Kansas basketball team is about to have another typically great season under the guidance of Bill Self. Win 30-plus games. Capture another Big 12 regular-season title. Enter March Madness as one of the favorites to reach the Final Four. You know the drill.

What we don’t know, however, is which of KU’s talented players will finish 2016-17 as the team’s leading scorer.

Each of the last couple of years, you got the feeling Perry Ellis would take that honor, and he did — 13.8 points per game as a junior and 16.9 as a senior during his (insert a number of years here that makes you laugh) season playing inside Allen Fieldhouse.

No Ellis means a new leading scorer for the Jayhawks this season, but it’s easy to make an argument for a number of different players, as Matt Tait has discussed recently here at KUsports.com.

In a not-so-scientific poll of KU basketball fans, the majority (53%) predicted junior guard Devonté Graham will put up the most points. Sure one-and-done wing Josh Jackson finished second, with 22% of the votes. Senior guard Frank Mason III accounted for 11% of the fans’ picks, but 14% thought another Jayhawk on the roster will score more than Graham, Jackson or Mason.

#KUbball coach Bill Self's still wondering & so are we: Who leads KU in scoring during the upcoming season? https://t.co/rVryVRO0nx

Thanks to SI.com, we now have some more information to digest in this debate. SI’s College Basketball Projection System forecasted statistical outputs for every player from the Big 12, ACC, Big Ten, Pac-12, SEC, AAC, Atlantic 10 and Big East, as well as players on numerous marquee mid-major programs, and came up with a list of the top 100 scorers for the upcoming season.

The first Jayhawk to appear on the list is Jackson, at No. 49. SI’s system projects the versatile freshman small forward will average 15.7 points. 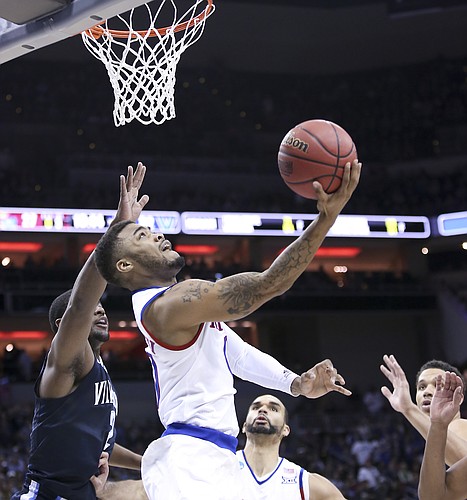 Kansas guard Frank Mason III (0) scores on a reverse layup early in the 2nd half of the Jayhawks 64-59 loss to the Villanova Wildcats Saturday, March 26, 2016 in an NCAA Elite Eight matchup at KFC YUM! Center in Louisville, KY. . by Mike Yoder

The only other Kansas representative on the list — which ends at players averaging 13.8 points — is Mason. The cunning veteran lead guard is expected to score 14.0 a game.

According to SI, Jackson figures to use 23% of KU’s possessions on offense, while Mason’s volume projects at 21%. Those numbers are close and indicative on how this team figures to play. There is no ball-dominant guard nor must-feed big man down low. The Jayhawks should have multiple capable scorers and matchups will determine who leads the team in points from game to game.

Of course, these computer-simulated numbers don’t mean the season actually will play out this way. Maybe Jackson leads KU in scoring before moving on to the NBA, like Andrew Wiggins did before him. Perhaps Mason’s athleticism and toughness help him accumulate the most buckets and free throws. Graham seems like a legit candidate, as well, with his three-point shooting touch and ability to finish in the open floor. And it’s hard to rule out Carlton Bragg Jr., who is poised for a significantly larger role as a sophomore. It should be an interesting storyline for KU fans to follow in the months ahead.

Also of note from SI’s projections, Kansas will have to figure out ways to stop some of the best scorers in the nation this year. Davidson senior point guard Jack Gibbs tops the list, with 23.6 points per game predicted. KU faces Gibbs at Sprint Center in December.

Duke junior guard Grayson Allen, whom the Jayhawks will see at Madison Square Garden in the second week of the season, came in at No. 3, with a projection of 20.1 points.

When Kansas opens the regular season in Hawaii, SI’s No. 13 scorer, junior guard James Blackmon Jr. (17.6 projected PPG) will be there trying to outgun Mason, Graham and Jackson.

It is easy to see 4 players avg between 12 & 16 ppg, with the centers, Vick and Svi all coming in between 8 and 12 ppg. Well maybe not quite that much since that alone would be over 90 ppg. They're good, but probably not quite that good/offensive.

Agreed, the other day I was trying to figure out who would lead in scoring, how man ppg they would get, etc. and came to the conclusion that we'll probably have a leading scorer in the 15/16 ppg range, 2-3 more guys above 12 ppg, and then possibly 2 more in double digits as well (so possibly 6 or 7 double digit scorers).

Public has moved my unofficial opening odds by making Graham the favorite, a tough point to argue: http://www2.kusports.com/news/2016/ju...