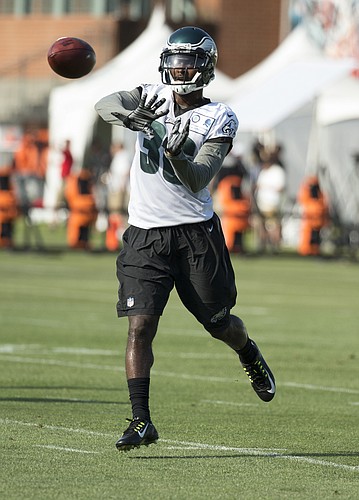 It’s been close to 20 months since JaCorey Shepherd last played in a football game. Yet the former Kansas defensive back feels more prepared than ever as he embarks on the first true season of his professional career.

Poised to start as a rookie nickel corner for Philadelphia last year, Shepherd tore his right anterior cruciate ligament in preseason camp and, instead, spent all of 2015 as an observer.

A 2015 sixth-round draft pick still awaiting to make his NFL debut, Shepherd at least sensed the next portion of his football life inching closer Monday, when the 23-year-old corner reported early to Philadelphia’s training camp.

“I never had to miss a season,” Shepherd told CSNPhilly.com upon arriving with rookies, quarterbacks and other returning players who finished last season on injured reserve. “I never had to really miss a game. Missed two games in college but other than that, I never missed anything.

“Game days were the toughest — sitting on the sideline and I couldn’t do anything,” Shepherd recalled. “Practice was tough, but I got used to it. But games? That was the hardest.”

Still, according to one Eagles veteran, Shepherd found a way to grow as a player while injured. Nolan Carroll told CSNPhilly former head coach Chip Kelly allowed wounded players to watch games on the sidelines and even travel with the team for away games. Carroll said he would leave the field after a series and always notice Shepherd listening closely as the secondary reviewed its performance and made necessary adjustments.

“The older guys would always question me to make sure I was on my P’s and Q’s,” Shepherd said of Undlin’s approach, which allowed the rookie corner to absorb NFL-level defensive knowledge, “so that way when I got back, I had the mental part down and it was really just a matter of getting my feet down under me, and I’d be ready to go.”

The 5-foot-11 corner, as planned, arrived at preseason training camp knee-brace free. Shepherd told NJ.com he kept training in the brace back home up until the last couple of weeks. Now he feels like he’s back at 100 percent, just in time to fully prepare for the upcoming season.

"I'm just getting my groove back, getting my feet back under me,” Shepherd said. “It's really just learning the playbook. It's kind of different getting out there, making the calls and trying to be consistent.”

Of course, the competitor in Shepherd has him gunning for a No. 1 spot on the depth chart, too. He told The Inquirer he doesn’t want the Eagles to relegate him to a role within specific packages. He aims to win one of the starting spots as an outside cornerback.

"Hell, yeah. It's open, baby," Shepherd told The Inquirer of the competition. "No job is taken yet, and that's the way I'm going to attack it. Regardless of how many [defensive backs] we have in the room, I know I'm going for a starting spot."

"I pretty much think I can get out there and cover whoever," Shepherd said. "I'm big enough, fast enough. It's just getting thrown out there and playing."

A draft pick from the previous regime, Shepherd told CSNPhilly he can’t afford to worry about Pederson or new defensive coordinator Jim Schwartz perhaps holding a different opinion of him than Kelly and other former staff members.

“All I can do is continue to do what I do, and control what I can control,” he said. “You know? That’s the way the game is. There’s always going to be competition. Frankly, I love competition, so that doesn’t bother me at all. I’ve never been worried about competition, and I’m not going to start now…

“If there’s not a job here, there’s a job somewhere else,” Shepherd added. “All I can control is give it my all on every play.”

If nothing else, Shepherd enters his second season in the NFL as a more patient player, thanks to his injury-forced apprenticeship.

Why have we produced so many good DB's?

Many of the diamonds in the rough that we've brought in were DB's it seems. I've noticed that the "athletes" that we bring in are typically tried at WR or DB due to their speed. The most important answer to your question is that Kenny Perry and Clint Bowen seem to know how to coach the secondary a good bit to me.

Our DBs have gotten plenty of reps since we have not had a decent pass rushing D line in recent years.