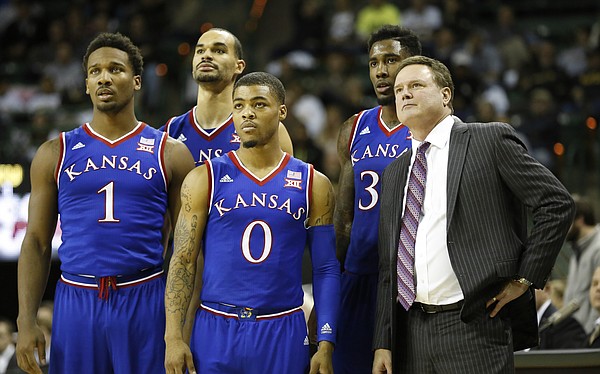 Kansas players, from left, Wayne Selden, Perry Ellis, Frank Mason and Jamari Traylor watch a pair of free throws from Kelly Oubre with head coach Bill Self after a flagrant foul by Baylor during the second half on Wednesday, Jan. 7, 2014 at Ferrell Center in Waco, Texas. by Nick Krug

It’s only mid-January, but the No. 9-ranked Kansas University basketball team is about to play one of its biggest games of the regular season.

Coach Bill Self, whose Jayhawks are 14-2 overall and 3-0 in the conference, spoke with media members Thursday about what could be KU’s most difficult road test to date.

• It’s hard to recall other coaches who have had as much success with transfers as Fred Hoiberg has at Iowa State. They’ve been “right on point” on how they’ve conducted their recruiting. You’re looking at a lot of states in the Midwest that don’t produce great numbers of elite athletes. It’s a smart way to conduct business with having older guys play against a lot of freshmen and sophomores. … Style, playing time and other reasons factor into guys transferring. Those players who sit out might end up being more locked in once they’re eligible.

• Self likes playing on the ESPN GameDay showcase. Even away from Lawrence. It ends up being an infomercial for your school and program when you host one. It’s a game that deserves national attention. He wishes KU was hosting one this season.

• Self saw some of Iowa State at Baylor Wednesday night, while watching video from some of the other games. The Bears won 74-73. ISU played fabulous down the stretch, and Baylor might not have ever played better this season.

• There have been numerous games when KU hasn’t shot a large amount of free throws — unlike the game against Oklahoma State. Because of the "chippiness” of the last game, the refs ended up calling it closer. Self thinks refs have done a good job with the emphasis on freedom of movement of late. Watching video, you see refs get a lot more right than you would in their position.

• You can control defense and rebounding a lot more than execution and making shots.

• A lot of coaches are not in favor of shot-clock reduction. Self thinks the clock should be reduced, because coaches would adjust to it. A lot of coaches across America think it would lead to worse half-court offense if there were less time to execute. Self doesn’t agree. 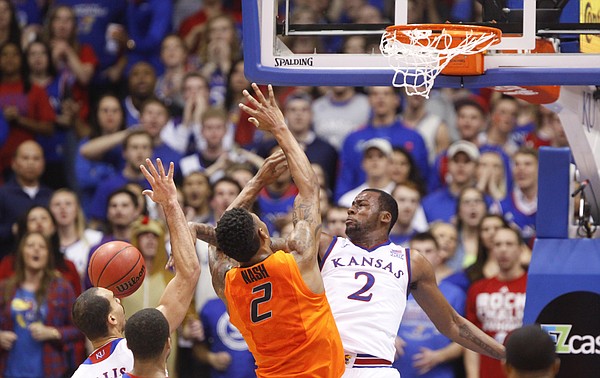 • KU’s defense has improved with better activity with their hands, more blocking and contesting shots, since the start of Big 12 play. Some of that started in late December, before conference play. Self thought they would be decent at contesting shots. Junior Jamari Traylor and sophomore Wayne Selden Jr. have gotten better at blocking shots from behind. KU doesn’t have a great shot-blocker. But there are more guys contesting and blocking shots.

• Junior forward Perry Ellis is just “a fraction away” from doing the things the coaches envisioned he could do. He needs to believe he’s the best player on the floor every night, because when he plays well he is. Maybe the situation for him is KU is winning so he thinks he can be just as productive as he was in past years. That’s not what the coaches want. They want Ellis to play assertively. He needs to be KU’s go-to guy. Self doesn’t think he’s far away. … Ellis remembers his misses and screw-ups. That’s something he has to get better at. He’s sometimes too nice a kid and rationalizes that KU is doing fine.

• Self doesn’t think the whole team has had great body language this season. That’s something they need to work on.

• Kelly Oubre Jr. doesn’t remember missed shots. He could miss three or four in a row, then knock the ball away and feel better and think the next shot or play he makes is the one that won the game. He has adjusted since his early-season slump. The schedule was a negative from that perspective, because guys could struggle and get down on themselves — because they’re so young.

• ISU’s Georges Niang is “terrific.” But you can’t focus on him, because the whole team can score. The Cyclones have eight players who are natural scorers and Monte Morris doesn’t turn it over (15 all seasons). “It’s gonna be, ‘Guard your man.’” Iowa State is very creative on offense.

• Last year, KU played really well at Ames. The year before Elijah Johnson was “off the charts.” It’s as good an atmosphere as KU will play in on the road this year.

• Winning this one and staying unbeaten would be important but it’s early in the season. And every game is going to impact the race for the conference championship. It would be way premature to think anybody would be in the driver’s seat after that win.

I believe the 2 toughest road games are at Ames and at West Virginia. If we can win this Saturday it says a lot about this team and will send a message to the rest of the league. RCJH!!

Can't wait -- I'm going to Ames for the game!!! I'll be in nosebleed with the crimson and blue wig. The real trick will be to see if I can get my brother to wear the one I'm bringing for him.

And.... avoid eye contact with that mid-50 guy in Cyclones sweatshirt with glasses. he's insane!