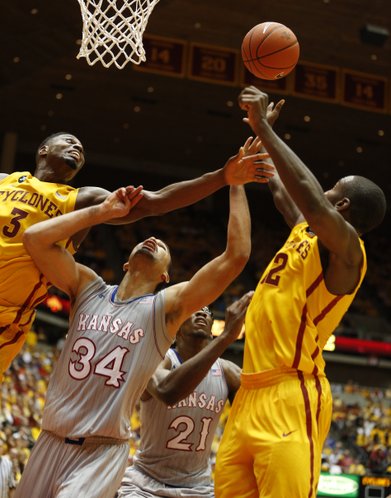 Kansas forward Perry Ellis looks for a rebound between Iowa State defenders Melvin Ejim, left, and Dustin Hogue during the second half on Monday, Jan. 13, 2014 at Hilton Coliseum in Ames, Iowa. by Nick Krug

A day before No. 6 Kansas welcomes No. 16 Iowa State to Allen Fieldhouse, a couple of the Jayhawks, as well as coach Bill Self, fielded questions from the media Tuesday afternoon at Allen Fieldhouse.

First up from Kansas (15-4 overall, 6-0 Big 12) was redshirt freshman big man Landen Lucas. The 6-foot-10 forward is typically the fifth man in KU's deep front-court rotation, but he played a season (and career) high 13 minutes in KU's Saturday victory at TCU, due to senior center Tarik Black sitting out the game with an ankle injury.

Lucas scored seven points and grabbed five rebounds at TCU, and he spoke with the media Tuesday about the ending to last year's Iowa State game at the fieldhouse, rebounding and eventually becoming a starter at KU, among other topics.

Naadir Tharpe, who actually didn't take a shot in KU's last game, followed Lucas. The junior guard talked about his 0-for-0, four-assist, no-turnover night at TCU, as well as realizing he had to take a stand with this young team and become the leader KU needed.

As you'll see at the end of the clip, Tharpe didn't have much time to talk, because he didn't want to be late for a session with strength coach Andrea Hudy.

Finally, Self went into great detail about the Cyclones (15-3, 3-3), their key players and what ISU coach Fred Hoiberg does to make it all work.

Self also hit on how the Jayhawks' bigs need to handle double-teams in the post, KU's 24 turnovers in a 77-70 win at Iowa State a couple weeks back and the Cyclones' ability to hit from three-point range.

The 11th-year Kansas coach said he's hopeful Black will be able to play against ISU, but the big man remained questionable as of Tuesday afternoon. The only good thing about that, Self added, is Kansas can plug in Lucas and not skip a beat.

Why do Lucas and Tharpe get the podium while Self looks like he got cornered by a swarm of reporters?

Great question. Typically, Self stands behind the podium. Today, he took questions in the hallway.

You have got to love Landens attitude, I just hope AWIII takes note. His body language didnt look good in the most recent game he got minutes (cant remember the game). He just looked uninterested. I understand all players want to play, but if he just keeps working and stays patient, his time will come and he will have an impact on the program , he just has to wait his turn as many others have before him. Its up to him on how much of an impact he will have. Sadly it looks like he's thrown in the towel , and I wouldnt be surprised if he decides to transfer. I just hope I'm wrong, because I like the kid and believe he has the talent to make an impact if he continues to work.

Thanks for putting the question on the video. It's been hard guessing what the question was over the last few years.