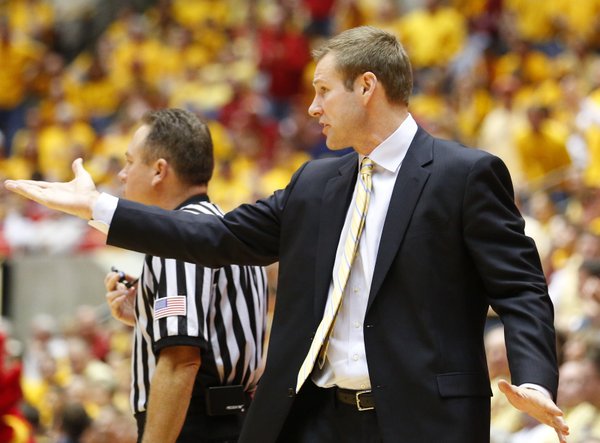 Iowa State head coach Fred Hoiberg pleads with an official during the second half on Monday, Feb. 25, 2013 at Hilton Coliseum in Ames, Iowa. by Nick Krug

Fourth-year Iowa State coach Fred Hoiberg doesn't have much to complain about these days.

His Cyclones have shot up through the rankings this season as they won 14 straight games, beating the likes of Michigan, BYU, Iowa, Boise State and Baylor along the way.

ISU, which many figured would enter tonight's Big Monday showdown with Kansas unbeaten, suffered its first setback of the season Saturday at Oklahoma, 87-82.

For a program with legitimate Big 12 title aspirations, a conference loss always stings, but potentially worse for No. 8 ISU (14-1 overall, 2-1 Big 12) heading into its home game against No. 15 Kansas (11-4, 2-0) is how the game at OU ended. The Cyclones' breakout star, senior guard DeAndre Kane, injured his left ankle with 22 seconds left.

Hoiberg said Monday morning Kane will be re-evaluated before tonight's game to see whether he will be able to play. However, it seems more likely that he will play.

For what it's worth, ESPN analyst Fran Fraschilla, who will be part of the Big Monday broadcast, offered his prediction on the situation via Twitter:


Here's another indication that Kane will play against KU, courtesy of CBS's Doug Gottlieb:

Been told from a spy that DeAndre Kane is ok, will play tonight, was jogging (Or Yogging if you like Anchorman) yesterday) #KUvs#ISU


The Cyclones, who have four players averaging double-digit scoring, are far more lethal with Kane. If he can't go against the Jayhawks or isn't at full strength, it could allow Kansas to build an early cushion in the Big 12 standings.

Of course, ISU is far from a one-man show. Here are the guys who hope to harness some "Hilton magic" and give KU its first conference loss of the season tonight. 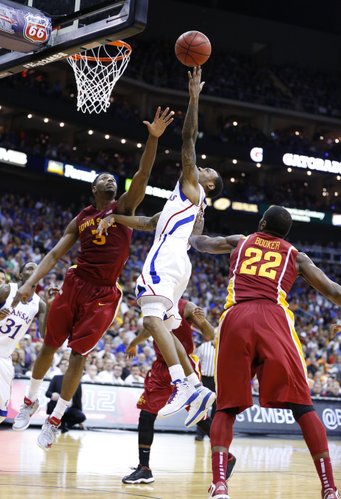 Kansas guard Naadir Tharpe heads to the bucket between Iowa State players Melvin Ejim (3) and Anthony Booker (22) during the second half of the semifinal round of the Big 12 tournament on Friday, March 15, 2013 at the Sprint Center in Kansas City, Missouri. by Nick Krug

Even if Kane doesn't play, Ejim leads Iowa State in scoring and is third in the Big 12 with an 18.0 average. The small forward has a nice all-around offensive game and has posted double figures in 17 straight games, dating back to last season. He put up 20-plus in six of those games.

He's shooting 52.1 percent from the field this year and has made 19 of his 55 three-pointers.

The Big 12's active leader with 26 career double-doubles, Ejim averages 7.1 rebounds and 2.1 assists, as well, despite being just 6-foot-6.

The 24-year-old, a transfer from Marshall, arrived at Ames, Iowa, and quickly became one of the nation's stars, as detailed in a feature by Eric Prisbell of USA Today.

The versatile veteran, in his first season at ISU, has posted back-to-back 20-plus point efforts, and averages 16.5 points, 7.3 rebounds and 6.1 assists.

As Bryce Miler of The Des Moines Register puts it, Kane is a "matchup disaster" for opposing guards.

Kane, a 34.5-percent three-point shooter, had 23 points and nine rebounds Saturday at Oklahoma, but the Big 12's assists leader left after injuring his ankle with 22 seconds remaining.

One could try to make a case that another player in the Big 12 has had a better all-around season, but it would be a waste of breath. That's why the injury Kane suffered Saturday could be such a blow to the Cyclones if it lessens his ability or keeps him out of tonight's Big Monday clash. 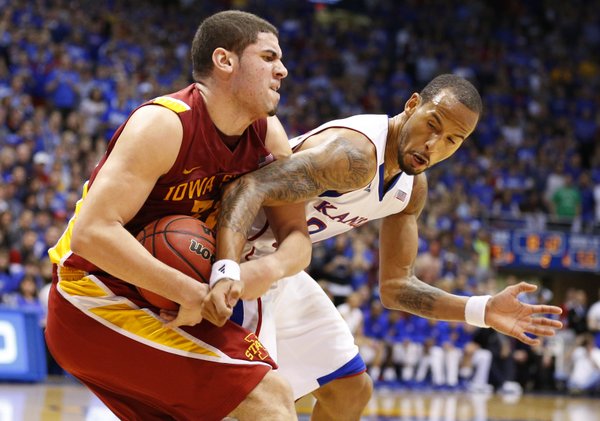 Every player in Iowa State's starting lineup can knock down three-pointers and the big guy from Methuen, Mass., is no exception. Though Niang has started the season cold (30.2 percent) from deep, his 53 attempts are fourth among ISU players and Hoiberg trusts in the sophomore wherever he touches the ball.

Niang averages 15.3 points, 4.1 rebonds and 3.5 assists (quite a number for a big) and averaged 15.7 points in three meeting with Kansas last season.

He has proven to be confident in clutch situations, too, going 11-for-15 from the floor in last five minutes of games this season.

Just this morning, Bill Self called him "a guy that's as good a rebounder from his spot as any kid in the country."

Another mid-sized ISU forward with huge game on the glass, Hogue leads the Big 12 in rebounding at 9.3 boards a game, while contributing 12.3 points as a 58-percent shooter.

Like every member of the Cyclones' seven-man rotation, Hogue will take three-pointers when he is open. The junior has hit 11 of 32 from three-point land so far.

His 65 three-point attempts are second on the team, but Thomas has made just 22 this season (33.8 percent).

He averages 6.8 points and 2.7 rebounds, but Hoiberg has him on the floor for his decision-making. Thomas has 13 assists and no turnovers since Iowa State's win at BYU on Nov. 20.

Hoiberg said Long could have the ball in his hands a lot tonight if Kane is out. And Long's shot is the long shot, so if he is behind the three-point arc, expect to see him jack and drain some treys, much to the delight of the home crowd.

Morris hasn't started once this season, but if Kane doesn't play against Kansas Hoiberg said the freshman will take over a lot of the ball-handling responsibilities.

A guy who figures to be a major part of the ISU program for four years, Morris averages 6.3 points, 2.3 rebounds and 2.9 assists. His most impressive stat, though: just three turnovers in his last 245 minutes of play.

This will be a tough match up in a hostile environment but I like our chances with Embiid and Perry.

This will indeed be a tough game in a very loud, hostile environment. Very interested to see how the KU players will react. I'm sure that Self is making it clear that each successive game, until the Big 12 title is decided, is the most important game of the season. Would love to see Embid block a couple of three attempts by Niang. Don't care what his numbers are to date, he is the type of chucker that will pick this game to get hot. Solid defense and strong rebounding will lead to a Jayhawk win.
Here's to 3-0, ROCK CHALK!