Journey of KU safety Brandon Hawks a story worth sharing 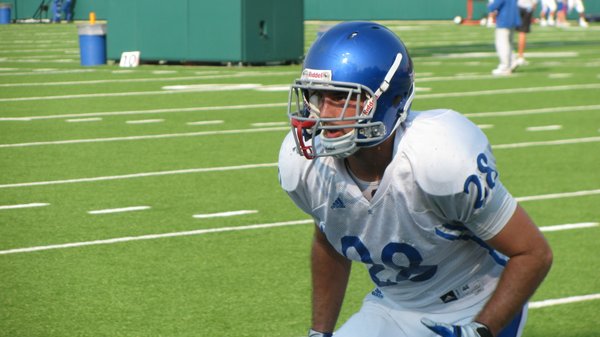 Kansas senior safety Brandon Hawks runs through a secondary drill at practice on Tuesday, Aug. 28, at the KU practice fields. by Jesse Newell

If you walk by the bronze Jayhawk on the south side of Memorial Stadium this week, think about Kansas safety Brandon Hawks.

It was two weeks ago, by that same statue, that he called his mother during one of the best days of his life.

Let’s start with this about Hawks: In his fifth year at KU, he’s never played one down for the Jayhawks.

The Oskaloosa native is on KU’s scout team, meaning he helps prepare the starters for the next week’s opponent.

“Brandon Hawks has been tackled more than any guy in the Big 12,” KU defensive backs coach Clint Bowen said. “The guy gets beat to death every day in tackling drills, and that’s his life. And he shows up every day and runs the ball just as hard the next time.”

A 4.0 student the last three semesters and the valedictorian of his high-school class, Hawks — a three-sport star — knew he was going to KU for a while.

His uncle took him to his first KU football game when was 7, and though the Jayhawks lost to Texas A&M, 24-21, on a cold, rainy day in October 1998, Hawks was awestruck.

He attended every KU home game in high school and wasn’t planning on playing football until he contacted Bowen, who was KU’s defensive coordinator at the time.

Bowen visited Oskaloosa High School to see if Hawks might be a fit.

“When you’re in the school, and they say, ‘Who’re you here to talk about?’ ‘Well, Brandon Hawks.’ Ten people go, ‘Oh, that’s the greatest kid in the world,’” Bowen said. “The guy’s had an effect on a lot of people in his hometown.”

KU offered Hawks a walk-on spot, and he showed up a few days before KU’s camp ended in 2008.

Hawks has been on the team ever since.

“I really wanted to be a part of this, and I didn’t want something like money to hold me back,” Hawks said. “I knew it was going to be rough.”

For the most part, it has been.

Without a scholarship, Hawks has had to work to pay for school and rent.

To help with that, Hawks —an education major with an emphasis in math — tutored for the KU athletic department. Many times, that meant tutoring for the same football players he had just practiced with a few hours earlier.

Hawks handled the situation gracefully. When he saw players messing around in the locker room, Hawks would give them a hard time, telling them to be sure to get to class on time and to not be late to their tutoring session.

The schedule, though, was grueling.

Last year during the fall semester, there were times when Hawks would finish with practice in the afternoon, drive to Subway, bring the sandwich back with him, then tutor a teammate while munching on his dinner.

After finishing up at 10 p.m., he would then work on his own homework to keep up his own A’s.

Offensive lineman Gavin Howard had classes with Hawks, and he jokingly calls him “one of the only dudes I would say might be better than I am at math on the team.”

Most nights, Hawks would get between four to six hours of sleep.

“I’d say the best thing was just great time management,” Hawks said. “Being motivated to get stuff done when I had the time to do it.”

The offseasons were just as demanding.

He also would work 12-15 hours a week at Hy-Vee. The duties there included bagging groceries, collecting carts, loading trucks and stocking shelves.

All this to build up money so he could continue to be on a team for which he never played.

“There were some pretty intense conditioning workouts where I was sitting there thinking, ‘Why in the world am I doing this?’” Hawks said. “At the end of the day —after a couple hours — I was like, ‘Yeah, this is where I need to be. I love it.’”

That brings us to two weeks ago when, during a meeting, KU coach Charlie Weis announced that the team had two additional scholarships to give out following some departures in the offseason.

After a pause, Weis said that Shane Smith and Justin Carnes would receive the scholarships.

“I was really excited for them,” Hawks said. “But all along, I was kind of hoping I would get one.”

A few seconds later, Weis had another announcement. The coach said that the team had reserved two more scholarships for players that had earned 4.0 GPAs the previous semester.

Running back Ryan Burton was the first one.

And Hawks was the second.

“I got a little teary-eyed,” Bowen said, “because I know what that kid’s put into it.”

“The best part was hearing everybody get so excited about it,” Hawks said.

The senior knew he didn’t have much time.

Just before the team’s afternoon practice that Friday, he dressed quickly and made his way outside the complex next to the bronze Jayhawk.

In full football pads, he called his mother, Kim, to tell her that he was officially a scholarship player for the KU football team.

“That was a pretty emotional moment,” Hawks said. “It was unreal. I didn’t accept it as reality for a couple days. It just seemed like it was a dream.”

Hawks, who hopes to one day become a high-school math teacher and football coach, says life will be a whole lot easier with a scholarship (Howard said he couldn’t remember a time during his years at KU when a football player received a scholarship based only on academics).

Hawks is student-teaching sixth-graders at South Junior High this semester, and now he says he can focus more on his work there, which includes teaching exponents to 12-year-olds.

“There’s not as much stress to make sure I am working all the time,” Hawks said. “I can relax and enjoy the college life a little bit more.”

Hawks knows that may or may not include getting on the field at least one time before his final game at KU.

“Of course, I’d love to get in on a play, but I understand that role is on show team right now, and I need to give the best look I can,” Hawks said.

“I just want the team to do well.”

What an impressive guy and I can't think of anyone more deserving on this team to be on full scholie. Congratulations Brandon!

How cool is that?

Really cool. Congrats on the scholarship Brandon, you earned it!

One of the many stories that make me proud to be a Jayhawk. I hope we do well enough in one of the early games that he does get on the field for a few plays. I know it won't be a "Rudy" moment, but the fact that his whole team lined up to shake his hand tells me all I need to know about this guy's character.

Absolutely awesome! Sounds like it couldn't have happened to a better kid. Congratulations, Brandon! Also, many kudos to Coach Weis for handing out two scholarships for 4.0 students that may never see the field. It's stories like this that make me proud to be a Jayhawk!

Looks like Jesse is back in the board's good graces after that article the other day. ;-)

I know Brandon, we are friends with the same people and in the past I occasionally ran into him at a party (at KU). I haven't seen him in about a year, but he really is a great guy, and this is a great story knowing that all of his hard work has paid off. Rock Chalk!

That kid better get a few snaps... If he gets a sack or a pick, then KU is in business for a movie!

Great article! I will make sure my nephew, who is a walk on at Okla State, reads this because it can be very discouraging as a walk on. Great job for hanging in there, that speaks highly of your determination and character, which will pay off in the future.

I imagine he is going to be a great coach and may be back on our sideline again someday. I hope he is. Great attitude, work ethic. Thanks, Jesse.

With a last name of Hawks, it was in the stars that someday he would play for the University of Kansas.

Think about it, all.....his math tutoring may have kept a bunch of guys eligible. This is better than "Rudy".

As great as this story is...I love the fact that HC Charlie Weis has such an emphasis on Academics. He gave the scholarship that gave everything to the football program, while still taking care of himself. This alone makes the HC hire the best thing that has happened to KU in football in a long while.

As a note, my understanding is every football player that CW brought to ND graduated as well.

Another less known tidbit is that during the years that the Patriots won all of their superbowls (with Charlie) about 90% (I'd have to go double check the number, but it was high) were college graduates, while the average in the NFL is somewhere in the 40s (again I'm not sure of the exact numbers, but it was this kind of spread).

He's Rudy with a 4.0. Tells you something about this coaching staff as well. This was the best feel good article in a long time.

That is what college athletics is meant to be. Congratulations. Pretty cool, Hawks.

I got a full ride based on a 3 hour test.

This guy earned it. And you can tell he will have success the rest of his life.

Way to Go Rudy!! and to you Coach Bowen, who undoubtedly had a hand in this gesture - and to you, Coach Weis, who has brought back respect, hope and excitement for this program. Go Hawks!

He really is "the greatest kid in the world". And we teachers LOVE all that he has done...and will continue to do! Congrats, Brandon! You've made Oskie and the Jayhawks proud!! Go get 'em this season!

Wow! Jesse, thanks for doing this story.