Recap: No defense, no problem for KU

On its worst defensive night of the year, Kansas still came away with an 82-78 victory over Colorado.

You can take that one of two ways. I think it's a positive for KU. 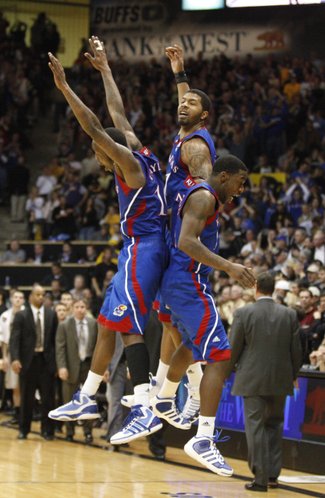 It's been proven over the years that the teams that fare the best in the NCAA Tournament are the most balanced teams. It makes sense.

To get to the Final Four, a team has to win in different types of games. One team might be a slow-it-down, defensive specialist, like Nebraska, while two days later, it could be a penetrating, quick, guard-oriented team like Colorado. Though KU was far from perfect against both of those teams this year, the Jayhawks showed that they could win in vastly different ways.

Against Nebraska, KU won by hunkering down and picking up its own defense.

Against Colorado on Tuesday, KU defeated a great CU offense by elevating its own offense even more. 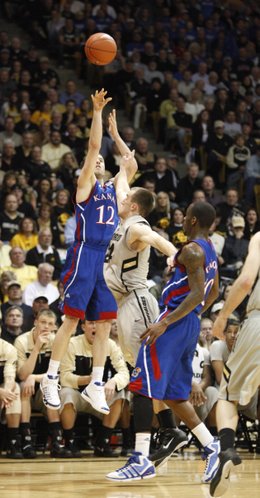 Kansas guard Brady Morningstar shoots a three over Colorado guard Levi Knutson during the first half on Tuesday, Jan. 25, 2011 at the Coors Events Center in Boulder. by Nick Krug

In a relatively slow game (65 possessions), the Jayhawks allowed 1.20 points per possession to the Buffaloes on Tuesday, the most allowed by KU since the 2008-09 season.

For most teams, that effort would probably result in a loss; KU still managed to turn it into a road win.

KU was spectacular offensively against CU, putting up 1.26 points per possession, which was its second-best offensive showing this year behind the Baylor game.

The Jayhawks also were great on the glass, pulling down 38.7 percent of the offensive rebounds — again, second best of the Big 12 season behind the Baylor contest. 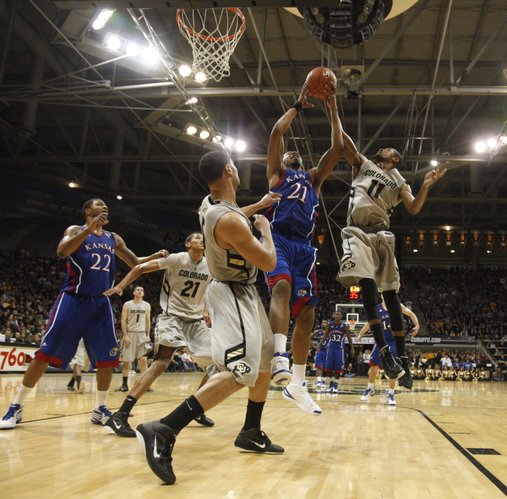 Kansas forward Markieff Morris (21) battles for a rebound with Colorado guard Cory Higgins (11) and Marcus Relphorde (5) during the second half on Tuesday, Jan. 25, 2011 at the Coors Events Center in Boulder. by Nick Krug

Listening to CU coach Tad Boyle talk afterwards, he didn't seem upset with his team's effort or his team's defense, despite the Jayhawks making more than half their shots.

And the Jayhawks showed the ability to simply outscore another team if it has to — a skill that might be needed against a good offensive team during a tournament game in March.

We have a clear-cut winner here, and it's freshman Josh Selby. 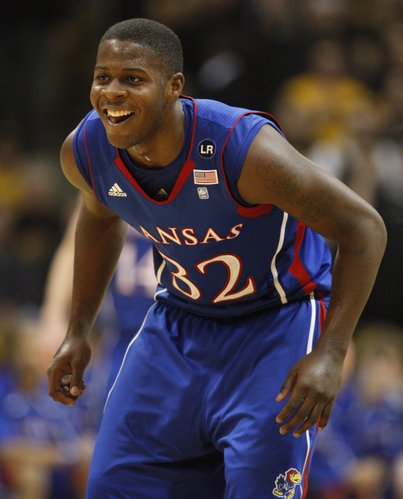 Kansas guard Josh Selby flashes a smile after hitting a three-pointer against Colorado during the first half on Tuesday, Jan. 25, 2011 at the Coors Events Center in Boulder. by Nick Krug

After a few tough offensive games in a row, Selby starred for KU on Tuesday, posting 1.59 points per possession used while ending a high number of KU's possessions (24.6 percent). KU scored at least one point on 55.2 percent of the possessions he used, which was his second-highest mark of the year.

Selby also posted his highest assist percentage as a Jayhawk, assisting on 44.9 percent of KU's made field goals while he was in the game.

Though a turned ankle limited his effectiveness late, Selby's early-game scoring helped the Jayhawks maintain a lead when they were having problems stopping Colorado defensively.

The KU guards could not stop Colorado's guards, especially on dribble penetration. 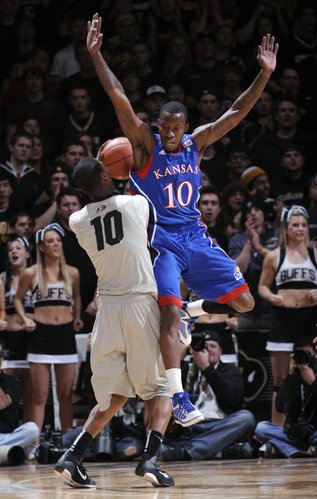 Going down the line, nearly every CU guard had a great offensive night. Alec Burks put up 1.21 points per possession used, while ending a Michael Jordan-esque 35.4 percent of CU's possessions.

Cory Higgins had 1.15 point per possessions used, while Levi Knutson had 1.73. Even Nate Tomlinson, who hadn't hit a field goal in his last five games, posted 2.06 points per possession used while making 3 of 6 field goals.

KU's perimeter defense also didn't force CU into mistakes. The Jayhawks forced turnovers on just 9.2 percent of the Buffs' possessions, their worst mark in a game this year.

Colorado's offense is difficult to guard, as Burks and Higgins both are gifted penetrators and shooters. 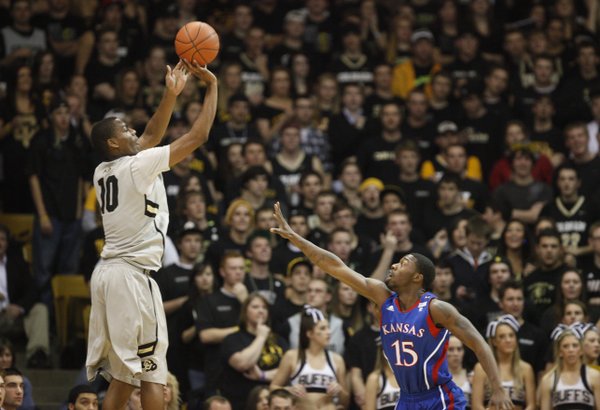 Colorado guard Alec Burks pulls up for a three-pointer over Kansas guard Elijah Johnson during the first half on Tuesday, Jan. 25, 2011 at the Coors Events Center in Boulder. by Nick Krug

One still wouldn't have expected Colorado to have scored that easily against a KU defense that ranked as one of the best in the nation coming into the game.

Let's start with a disclaimer here, as this is going to be an unfair "tough-luck line" as nearly every Jayhawk had impressive offensive statistics against Colorado.

The two candidates here are Markieff Morris and Tyrel Reed, though I can make a great case against either being selected here. 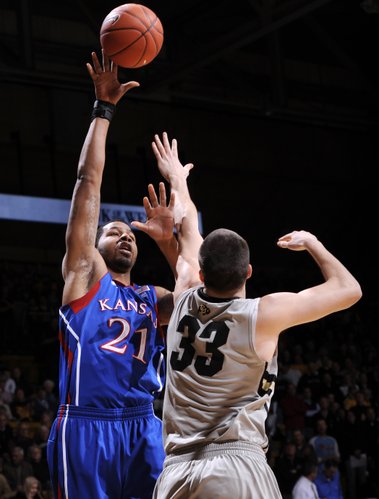 In a game where both coaches said that second-chance points were the difference (KU had 21, while CU had two), Markieff was a big reason that the Jayhawks dominated that facet.

Reed, meanwhile, posted 1.03 points per possession used, which was the second-lowest on the team Tuesday. 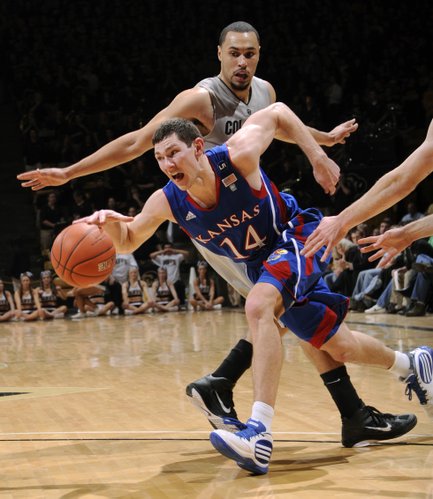 Somewhat unexpectedly, Reed ended a huge percentage of KU's possessions (29.6 percent), which is more than double the number of possessions he normally uses. That's not a good thing on an off shooting night. He also had a season-high three turnovers in 27 minutes.

I'm going with Reed here, simply because he used up an uncharacteristic amount of possessions when he wasn't one of the most efficient players on the team. On any other night, he wouldn't have even been in the running for this distinction.

On a night when KU's defense was poor, the Jayhawks won by playing well offensively and thriving in one defensive statistic: rebounding. 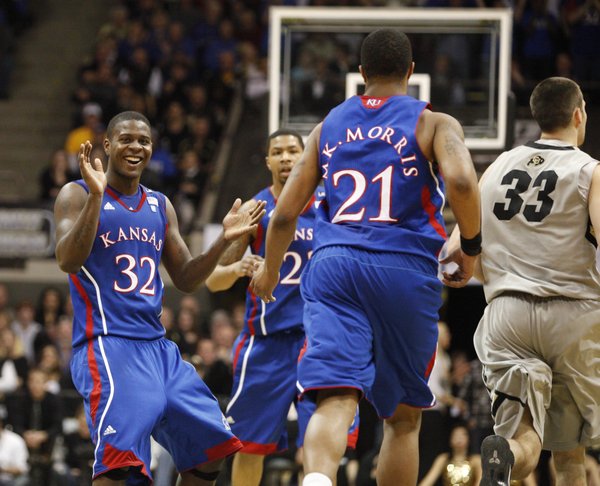 Kansas guard Josh Selby (32) celebrates with teammates Markieff Morris (21) and Marcus Morris after a KU bucket against Colorado during the second half on Tuesday, Jan. 25, 2011 at the Coors Events Center in Boulder. by Nick Krug

KU pulled down 86.2 percent of the available defensive rebounds — its best mark in the last two seasons and the sixth-best mark during KU coach Bill Self's eight years at KU. And that was without Thomas Robinson, who would have been a great matchup against the undersized Buffs.

That kind of balance allows the Jayhawks to be able to beat many different styles — and should make the Jayhawks one of the most dangerous teams in the nation come NCAA Tournament time.

Great work Jesse! I enjoy reading these with images from the game.

Somehow we pulled out a win.

YES. Releford is a HUGE missing link right now. I challenge anyone to name two areas that Releford ISN'T solid. He's one of the most complete players we've had, and if he's healthy, I know I want him in the rotation again.

He's still not a jump shooter, he still can be careless with the ball.

There's two. They may be his only flaws, if you can consider Not solid a flaw. I would rate him, above average but not solid in both categories.

That being said.... I wouldn't change a bit of his game this far. I don't freak when he takes jump shots, and I don't freak out when he uses that first step.

Cannot wait for him to rejoin this team.

Cannot wait to see us go full strength for the first time this season.

Imagine what kind of teams they'd be if Colorado had the Morris twins or Kansas had Burke and Higgins. YIKES!!

Texas is in the drivers seat for the Big 12 title but it's no easy road. The next three games: @Okie State, Missouri, @Texas A&M and that doesn't count @Colorado and @ Baylor on the last regular season game of the year.

Anythiong can happen, all we can do is keep winning.

Games we MAY not win: @ Kansas State, @ Missouri

Come on.. no faith in the annual Texas slide?

I am not sure about awarding Big 12 title to Texas as yet. They lost to Uconn, USC, and Pitt. They barely beat Illinois and their wins against NC and Spartans are over publicized (both these teams are not good as in the past). Their victory against A&M is by far the best of the season. They were losing by 12 points to KU in the first half before sleep deprived and emotionally drained KU players could not keep up with Texas's pressure and Doug Shows horrendous calls.

I don't think Texas is in the driver's seat. Besides it is way too early to start thinking about Big 12 crown, too much can happen between now and then. We're the favorite until further notice.

I've read all sorts of analysis on last nights game. It's making me feel like I may be the lone wolf in terms of who came up big, what sealed the victory, etc.

For me it was the final defensive trap of the ball in the last 30 or so seconds. I don't remember who the players were that trapped, I think it was one of the twins and Reed. But that play was HUGE. It forced lots of time off the clock, it contained any drive to the basket, and it was done without a bailout foul.

You are not alone on that one. One of the best defensive plays of the game and it happened at just the right time. It was Brady and Markieff, then Markieff sprinted over after the pass for the shot block with 2 seconds left.

Yep, I remember that too, BC. Good and timely defense.

I thought it was Markieff and Tyrel myself. It was defintely Markieff, for sure. I remember his smile after the trap. it was a look of... Got'em. Anyone who questions his basketball IQ just needs to watch that posession. Textbook defense.

After watching the game for the third time I have to say our defense was better then the stats show. We definitely got the short side of the calls. Which, as the game went on, caused out players to get softer on defense. I almost never speak about the way the games are called, but with all due respect to those officials. That was one of the most lopsided called games of late. We are fortunate we scored well, because we would have definitely lost the game otherwise. I appreciate the difficult job the officials have to do and thats why I don't normally comment. But anyone could see this was not a fairly called game from the beginning to the end. Congrats to the Jayhawks for keeping their heads up and playing hard to overcome the imbalance.

We make our normal freethrow percentage and season average for 3's, and we lose. Yes, the offense carried us to the win.

I've been repeating, "One game at a time.", for a while now, and I say it again. KState Kitty's are next, and I believe we're going to win this one for the "Gipper", TRob's mom. We may miss a few practices while attending the funeral, but the Hawks' hearts will win out. RCJH.

All I know is Jeff Withey has to start manin up. Jeez youre a footer , man. Move people around with authority. Slam the ball through the rim. Rip away rebounds like you did at Colorado. Youre on a top ten division one team. Play like you want to be a starter. You gotta play hard to break this lineup but theres no reason you can't, man. Right or Wrong?