Before we start, it's time for a little pop quiz.

If you had to describe the pace of KU's 85-65 victory over Baylor, would you say it was:

A) Pretty fast. Both teams' athletes got up and down the floor.
B) About average for KU.
C) Really slow. Like, slower than Nebraska slow.

It might have been hard to notice, but the correct answer is actually C. Though both teams had enough athletes to bring 35 NBA scouts to Waco, Texas, KU played at its slowest pace (63 possessions) of the entire year.

Which makes the Jayhawks' offensive performance even more impressive. 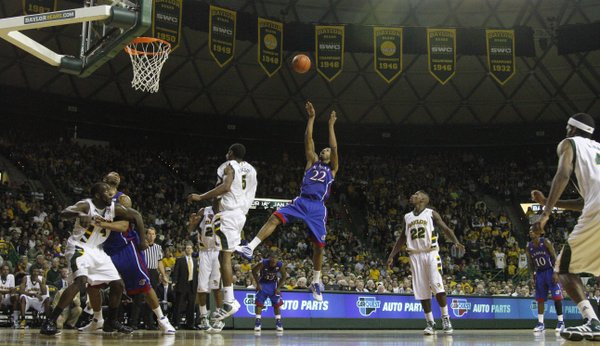 Kansas forward Marcus Morris (22) fades for a bucket in front of the Baylor defense during the first half. Morris had 25 points in the Jayhawks’ 85-65 victory over the Bears on Monday in Waco, Texas. by Nick Krug

Coming off three of their worst offensive performances of the season against Michigan, Iowa State and Nebraska, the Jayhawks showed their offensive ceiling on Monday against Baylor.

KU posted 1.35 points per possession, which was the third-highest mark of the year and the most PPP given up by Baylor since the 2006-07 season.

The Jayhawks also had their best shooting night of the year, notching an eFG% of 68.8 percent.

Not only that, KU gobbled up most of the few misses it had. The Jayhawks grabbed 47.6 percent of the available offensive rebounds against a great rebounding team.

The Jayhawks' offensive effort was so good that, in one game, KU jumped from 18th to 11th nationally in adjusted offensive efficiency. 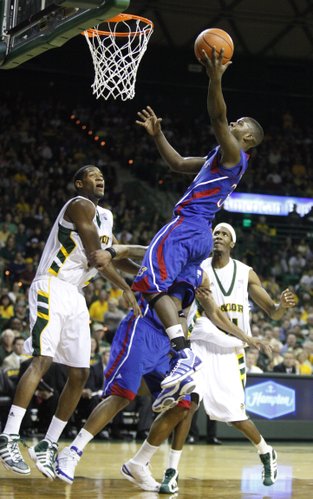 Kansas guard Josh Selby swoops in for a bucket over Baylor defenders Perry Jones, left, and Anthony Jones during the first half on Monday, Jan. 17, 2011 at the Ferrell Center in Waco, Texas. by Nick Krug

Though KU appears to have a roster built to run, it had its best offensive effort of the season (considering the opponent/location) in the slowest of its games.

That's not something I would have expected, especially against Baylor.

Let me first start by offering apologies to Marcus Morris. 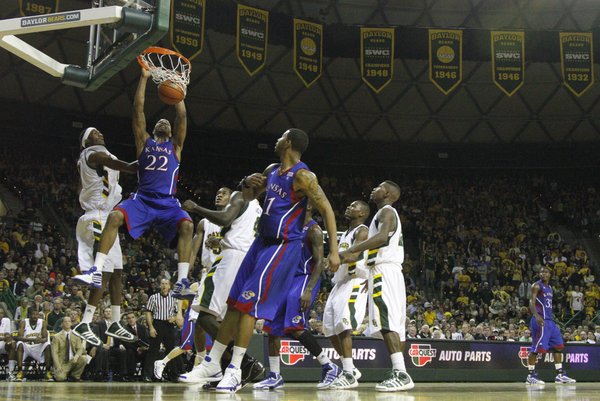 Kansas forward Marcus Morris delivers a jam on the Baylor defense during the first half on Monday, Jan. 17, 2011 at the Ferrell Center in Waco, Texas. by Nick Krug

The 6-foot-9 forward posted 1.36 points per possession used while ending 30.7 percent of KU's possessions (average is 20 percent) when he was on the floor, which are All-American numbers. He also pulled down 24.5 percent of the available offensive rebounds and scored at least one point on 70.4 percent of the possessions he ended.

If he puts up those numbers any other game, he wins M.O.J. in a landslide.

Against Baylor, those numbers weren't even best on the team.

That's because, somehow, his brother Markieff was even more efficient. 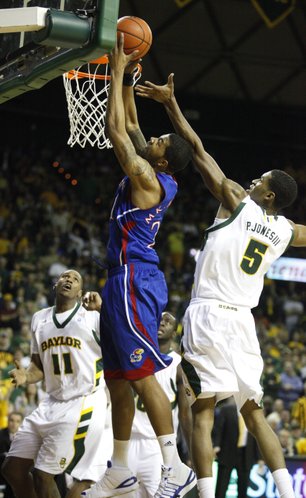 Kansas forward Markieff Morris powers in a bucket past Baylor forward Perry Jones during the first half on Monday, Jan. 17, 2011 at the Ferrell Center in Waco, Texas. by Nick Krug

It was probably the most efficient effort for a Jayhawk all season, and I would think would rank as one of the top two KU individual performances this year along with Marcus' 33-point, 13-rebound showing against Iowa State.

KU's defense actually wasn't all that great against Baylor, as the Jayhawks allowed 1.03 points per possession — their second-worst defensive game this season.

The big reason? The Jayhawks had troubles playing defense without fouling. 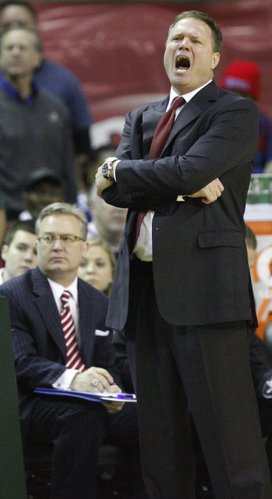 Kansas head coach Bill Self yells at his defense as Baylor cuts the lead during the second half on Monday, Jan. 17, 2011 at the Ferrell Center in Waco, Texas. by Nick Krug

Baylor's free-throw rate (free throws divided by field goal attempts) was 63.4 — the highest number by a KU opponent since the Jayhawks' 2008 game against Syracuse at Sprint Center.

The Bears' 26 free-throw attempts helped them keep their efficiency high on a day when they were even more careless with the basketball than they normally are.

This wasn't Thomas Robinson's night, partially because Baylor was not a good matchup for him. 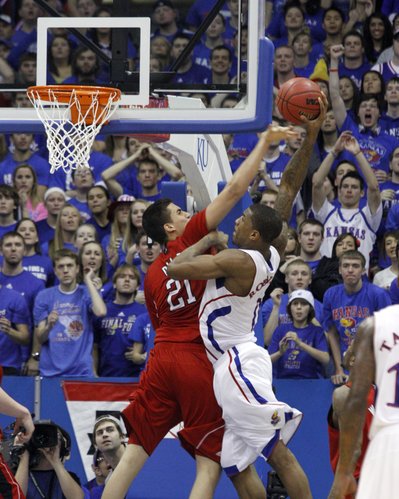 Thomas Robinson goes over Nebraska's Jorge Brian Diaz in the second half on Saturday, Jan. 15, 2011 at Allen Fieldhouse. by Kevin Anderson

With the Bears' zone, one of the openings that KU tries to exploit is the elbows — a spot where Robinson wasn't comfortable receiving the ball. When Robinson did get the ball there, he seemed hesitant, and that turned him into a liability offensively.

The sophomore posted just 0.31 points per possession used while ending 39.6 percent of the team's possessions (about twice an average player) during his eight minutes.

Robinson's turnover woes (four in eight minutes Monday) hurt KU offensively, and it's the reason that the forward has gotten the quick hook recently when he's started off the game poorly.

After three straight bad offensive games, the Jayhawks responded with their best offensive game of the year against a tough opponent. 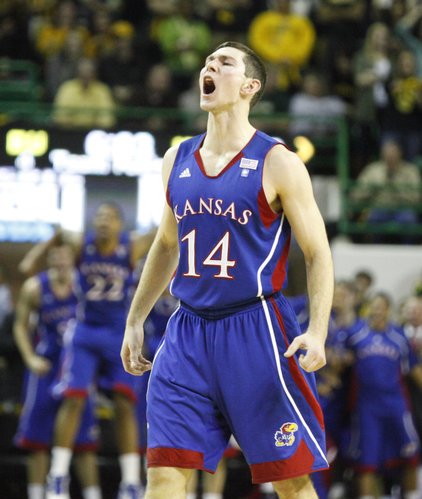 Kansas guard Tyrel Reed roars after a dunk by teammate Thomas Robinson against Baylor during the first half on Monday, Jan. 17, 2011 at the Ferrell Center in Waco, Texas. by Nick Krug

KU carved up Baylor's 2-3 zone, using quick, crisp passes to get good shots inside. It was the kind of performance that will make opposing coaches think twice before deciding to go primarily zone against the Jayhawks.

Though KU fouled too much defensively, it still was able to force lots of turnovers. The Bears had their third-highest turnover percentage of the year (28.6 percent); coming in, BU had turned it over on 22.7 percent of its possessions.

The Jayhawks will now have the rest of the week to prepare for Saturday's home game against Texas — a game that could go a long way toward deciding the eventual Big 12 champion.

I am glad to see this analysis. The doubt gremlin kept gnawing at me until I read your article. If the Hawks shot 80% why only 53 points? Thank you, now it makes sense. The most compelling things about this game were the athleticism shown by the Morris twins which I have seen flashes of but not at this rate. The mid range jumper game including Mr. Little. And lastly the ability to score around the basket by Taylor, Selby and Reed. Sweet game. My son, who lives in Chicago and lived in Lawrence for 7 years, after this weekend with the Bears and the Jayhawk's last night said: "where has this been all year, I'm loving it." Thanks Jesse for removing my only worry.

Jesse, did you hear anything about Baylors introduction video showing our loss to Northern Iowa? Also, did our guys stay in the gym during the Baylor intro? ( Unlike Drews pathetic exhibition in Allen last year)

The loss to Northern Iowa was shown during a timeout, not the intro. It was showing 3 things Baylor does better than KU (Taller team, better football and better finish in 2010). The Jayhawks stayed on the floor and watched the actual intro video.

By the way, for those who haven't seen it yet, that jayhawk basketball tattoo on espn. com is pretty sweet. quite a story... http://sports.espn.go.com/ncb/columns/story?columnist=forde_pat&id=6033038

Completely off topic, but ESPN.com has a nice write up on a KU (female) fan who has shown her devotion to the Jayhawks with a large (full upper back) tattoo. The article includes a couple pictures, one with Bill Self standing by the young lady with her back to the camera displaying the artwork. I'm not much of a tattoo person, but it is a beautiful tattoo. And as a Jayhawk fan, I can't argue over her choice of subject matter.

PS: The article, the Forde minutes, includes a nice write up, including Forde's ranking KU as #1 this week (after the Baylor game).

Sorry saad007, somehow we crossed paths and you beat me to the draw. It's a great article though.

No worries buddy! it doesn't matter who posts it first, as long as our fellow jayhawks read about the greatness and devotion of jayhawk fans. It is indeed a great article. Rock chalk ;)

Just read on Foxsports.com that Daniels is expected to sign with Kansas as early as today!!!!!!!!!!!!!!! It's in the late breaking news section. Perhaps the Baylor win put the Hawks over the top.

Corrct that, I got so excited by the headline that I forgot to read the smal print. It was dated Jan.4, with a disclaimer at the bottom dated 1/17/2011

It's Iba at his best.

When you play too fast paced, you are not nearly as efficient from the 3pt line to the rim. You get more possessions, but you commit more turnovers and take poor shots. That Selby + Reed 3 for 16 performance was a perfect example. They did not execute from the 3pt line to the rim, instead throwing up garbage from outside. That's lost possessions. Great teams don't waste possessions and they did that well in the first half against Baylor. Great Teams also grab 45-50% of their available offensive rebounds. The Jayhawks missed 21 shots against Baylor... but grabbed 10 Offensive boards.

While the Defense was weak, they did force their opponent into half court sets, not giving up transition baskets. Their opponent, a smart team, still managed 50% shooting, even facing the half court sets... but the lack of transition baskets gave the Jayhawks the edge. The Jayhawks also held Baylor to 30% of their offensive boards (7 of 21 available) giving them a 20% advantage on the defensive end.

Thanks Jesse. I've been anxiously awaiting the analysis all day. I was going to go back and look at it but I wondered how many possessions we did not score on in the first half. With 80% FG % and several offense rebounds put back for scores, coupled with the low number of possessions, it seemed like we only had a handful that we did not score. Just curious.

Any word on Daniels or McLemore?

Jesse, I said "pretty fast." According to your analysis, I was way off. After you explain everything, it all is fairly logical. Thanks for your hard work and A+ analysis!

good stuff. A little surprised the D was that poor. I think the fouling is starting to become an issue! Seems like most of the fouls are because of 2 common problems, 1) unnecessary reach ins and 2) a lack of help defense. Too many times KU is bailing out the opponent by failing on these two fundamental qualities!!! Something I'm sure they are working on.

I guess dude was just trying to live up to his name.

Lazy freaking college students. And too cheap to spring for a sleazy motel.

I give them four stars for maintaining their focus out in the open on a cold, cold Nebraska night!