I made it around to 10 (of the 15) Kansas men's basketball players during 45 minutes at media day last week and was able to ask them their opinions for an anonymous poll. Players were allowed to vote for themselves.

The results are below. Question: Who will be this year's most improved player? 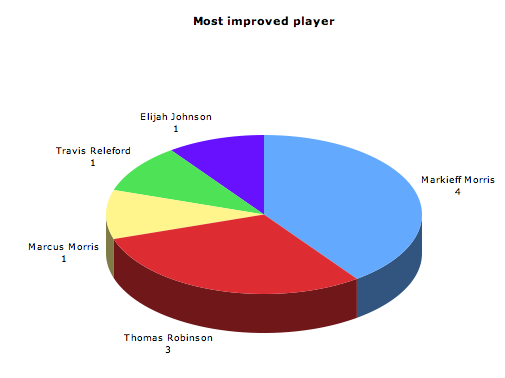 Thoughts: From all indications, Markieff has been one of the hardest workers during the offseason, so it's not too shocking that he received the most votes. If the one voter is right, and Marcus Morris is KU's most improved player for the second straight year, you'd have to think he'd be a lottery pick in 2011.

Question: Who is the best offensive player? 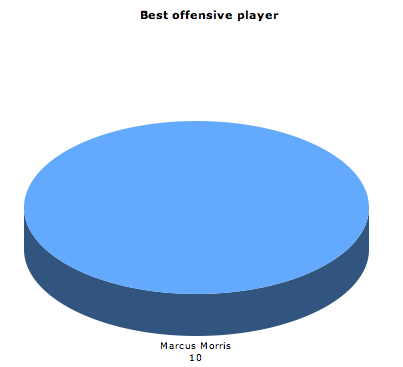 Thoughts: No votes for Josh Selby, huh? Marcus definitely deserves this distinction, though I didn't think he'd be a unanimous choice.

Question: Who is the best defensive player? 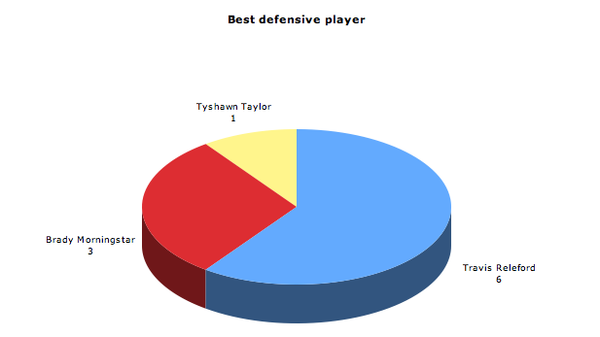 Thoughts: This surprised me quite a bit. I would have thought that Brady Morningstar would run away with this category because of his defensive reputation; Travis Releford must be wowing his teammates in practices and pickup games with his D.

Question: Who will be this year's surprise player? 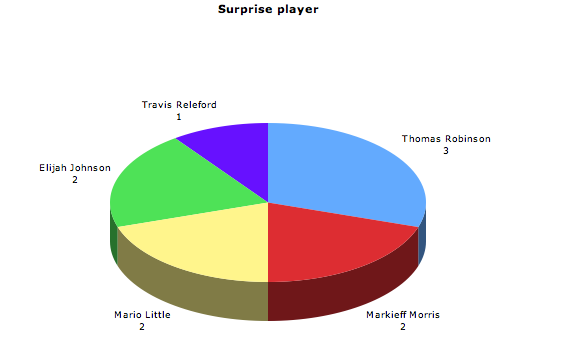 Thoughts: Though this is similar to asking for the "most improved player," I figured there was enough distinction to ask a separate question. KU could definitely benefit from a more consistent Thomas Robinson, who showed flashes of potential a year ago. Mario Little and Elijah Johnson also are good picks to surprise, as it's tough to know what to expect from them because of limited playing time.

Question: Where is the toughest place to play in the Big 12? 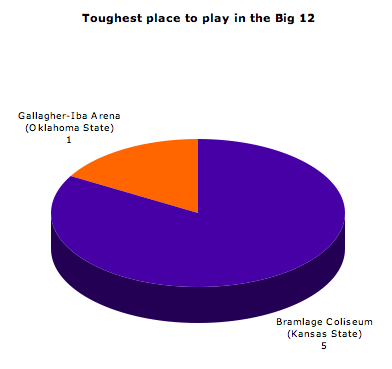 Thoughts: I wasn't able to ask this to question to everyone, and for a few players, it didn't apply because they haven't been to Big 12 arenas yet. This tally seems about right. I'd agree that Bramlage has the best atmosphere when KU is playing there, though I can't blame the one player for picking Gallagher-Iba, either.

Got a feeling that Travis relaford is gonna be a freak on the court this season. Should also see some bigtime production from kief when it comes to blocked shots and rebounds.

Still think T-rob has another couple years to go before he shines. Wished he would of red shirted last season.

Look out for Elijah !

I predict that EJ will play about as much as he did last season. Raw project.

Who knows, he was high flying at late night

If Travis is that good defensively (Coach Self likes that!) and has improved offensively as much as some have indicated, he could be a major contributor this season.

Funny that the Octagon of Doom was picked as the hardest place to play at in the Big 12----since it has opened up for business, the Jayhawks have only lost there one time----thanks to Michael Beasely (SP?).

Short Term memory, 75. It's the toughest because it's the most recent. Also, We're a pretty young team, thse days. they don't know much about rivalry. I'd bet The vote for Oklahoma State was one of the seasoned guys ( Brady my guess ). I would have said O-State or Ames, even though neither team has been a recent top tier team, the fans are always nuts and there is some strange mojo in those perspective buildings. When a building has the ability to take on a life of it's own, you know it's special.

It's really hard to play in the Octagon of Dumb when you're laughing so hard at the K-State hoosiers in the stands. It really throws your timing off. :)

5th year senior; finally healthy; national JUCO POY; hungry after red-shirting.... This is a no brainer - Mario Little will be the big surprise for most fans.

I'm bummed. Not a single mention of Withey. Not a vote. I love this kid's game. He's easily the most athletic 7 footer in the Big 12. He's Cole's equivalent at the blocked shot. He gets his hands in passing lanes. And if he gets warmed up he can score in a variety of ways, including from 15-20 feet.

He's not a banger, but he should get his opportunities against certain matchups, or when the twins are in foul trouble.

Since nobody is talking about him, he's my surprise player.

Venue? The Hicktagon is loud, but there is a huge KU presence too. How about The SuperDumb in Austin?

No mention of Withey or Selby or Reed or several other players. Hopefully Withey gets healthy and he can helped the team this year. Not sure he will see much floor time if Robinson and Little are playing well. Self most likely play Little at the power forward position in certain circumstances this season. Not sure why you can say Withey can block shots like Cole. He hasn't been on the floor long enough in a game to show he is a great shot blocker. He is 7 ft but that doesn't prove he is a shot blocker. If Withey is our most improved player this year we should go deep into the tournament this year.

According to Cole and other players last year, Withey blocked more shots in practice than Cole.

Brain slow this morning. I forgot to add--this category is for who will be most improved or a surprise. Both Reed and Selby are expected to be good, so great performances from them would'nt be a surprise in any of the polled areas. Plus, Selby doesn't qualify for the improved category.

KG---kind of thinking with you on two fronts----Withey has that blocking ability, that's for sure.

Also, I agree with you when the Jayhawks come to Austin to play BB. Tough place when it is packed to the rafters.

I wouldn't vote Withey based solely on his health issues. 7-footers with foot/ ankle/ knee issues almost never pan out because they can't stay on the floor. Not saying that will be the case with Jeff, but until he stays healthy, I don't think he's someone to rely on.

I was surprised Morningstar is still getting votes as our best defender, even though he struggled most of last year on the defensive end. I think when it comes to having a stopper, either Little or Releford will get the call this year, as they both have more prototypical wing size.

I just cant wait for the season to start.

This is a legiimatet Division One 12 player rotation. The question is will HCBS break his modus operandi and expand from his 8/9 system.

I say to you Coach Bill, "HELL YES". Full court press our opponents into oblivion!!!!!!

wishful thinking. In a game thats close for 40 minutes Self won't play 12 guys unless theres foul trouble. When reading Selfs comments its sounding more and more like Marcus is going to get time playing the 3/on the wing. Thats going to hurt the chances of one of the guards cracking the rotation.

"marcus is probably our best 3 man too".

If you listen to the press conference that was on this site last week, these were Selfs exact words.

Maybe he was just trying to light a fire under little and relefords a$$.

Marcus & Mario make a nice combination/matchup nightmare, since they can both play 3 or 4 as the matchup dictates. That's Self Ball.

Oh Emm Gee that would be incredible if CS did that. They would steamroll teams! Duke would go toes up and beg for mercy! Lets just hope the coach feels that way about his team this year.
Good line up Oakville, I think Selby, if cleared, will play the point though.

I was hoping for at least one player to say the toughest place to play was AFH. :)

So much potential on this team.

After watching them during Late Night last week, I like Self's comparison of this team to the 2008 team. Great chemistry, great speed, and unlimited potential (olly-oop is making its return by the look of it).

I forsee another season of having 10 or so players lead in scoring during the season.

Surprised there is no mention of Taylor. This has to be his breakout year.

I still cringe whenever Taylor has the ball. He makes some idiotic plays at times (i.e making passes that end up in the stands happens once a game for him)

Taylor needs to be the guy who wants the ball when the games on the line... right now I don't think he's ready for that responsibilty.

Mk & Mr Robinson have had comments elsewhere about impressive physique changes over the summer. This bodes well for the front court, tho not necessarily for Withey. I'd be willing to settle for a Cole v.08 year from him, with him really breaking out next year.

A fine article, Jesse. Wish you could have polled all 15 team members and at least two members of the coaching staff. Yeah, oldalum, I remember a remark from last season re Withey's blocking more shots than Cole in practice. Would be dandy to watch Jeff step up late in the season to seal off the low post and take the wind out of a few opponents, somewhat in the fashion that Cole did on Hansbrough in '08! I recall a sweet hook shot from Jeff in one of our games last season. He just might surprise fans with a gentler offensive touch than we are accustomed to from Cole and Sasha.

Withey's PT also may depend a little on whether or not Self decides to let this team, which is built to run, run. Withey gets up and down the floor well. He's a good rebounder with the ability to see over players and down the court for quick outlet passes to start the fast break. Releford would also benefit from this unlikely scenario with his attacking mentality, athleticism and ability to finish. But if Self is his more predictable self, Little's half-court game will win out, and the twins will bang around until they 4-foul Jeff into the game.

Ideally I'd like to see them pull the trigger on the fast break as often as they can prove the ability to execute it (should be often with Taylor and Selby). But then be able to downshift and run a half-court clinic (Little, Reed, Morningstar) when playing Princeton style teams. And when teams start playing Xtreme Muscle Ball in March, let the Twin's and TRob's newest Hudy-bulk swing some elbows. Where's jaybate by the way?

I'm looking forward to seeing a lot of players in action this year. As already mentioned Releford will bring his intensity to the defense and it wouldn't be a Self coached team without a few of those players. Woolridge and Wesley will give the team some good minutes. But most of all, I'm excited to see how Little has improved and think he can forge a strong leadership with Marcus and hopefully Selby.