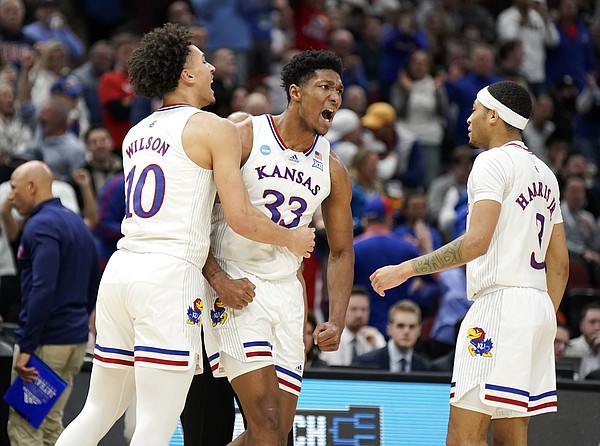 Kansas forward David McCormack (33) celebrates with Kansas forward Jalen Wilson (10) and Kansas guard Dajuan Harris Jr. (3) after an and-one bucket during the second half on Sunday, March 27, 2022 at United Center in Chicago. The Jayhawks defeated the Hurricanes, 76-50 to advance to the Final Four. by Nick Krug

1 – David McCormack – As he walked out of the United Center to the team bus — as the last player to leave KU’s locker room — McCormack said Sunday was a day to respond. Boy, did he. He responded to a rough couple of weeks. He and his team responded to a rough first half. And this group responded to everyone who said earlier this season, or perhaps even at the start of this tournament, that they did not have enough to get to a Final Four by getting there on the back of their big man, who finished with 15 points on 6-of-7 shooting and proved to be too much of a monster for Miami to handle down low. His and-one bucket early in the first half pushed KU’s lead from 5 to 8 and was the unofficial beginning of the end for the Hurricanes. Not only did it push the KU lead closer to double digits, but it also fully injected serious life into everyone on the KU roster. McCormack looked good from the start in this one. And now he gets to try to keep that response going on college basketball’s biggest stage with the Jayhawks just 2 wins away from their ultimate goal.

2 – Ochai Agbaji – The 18 points on 8-of-12 shooting marked a return to normal for Agbaji, who cashed both of his 3-point attempts and also scored going to the rim much the way he had throughout the early and middle portions of the season. But don’t overlook how big his 4 assists and 4 steals were in this one. One of those steals, on the opening possession of the second half, kept Miami from pushing its lead to 8 or 9 points and gave KU instant momentum. The KU senior has been so efficient all season long that an 18-point night on 75% shooting kind of seems like a ho-hum showing. But it was not. It was huge. On a big stage. And it reminded Agbaji of what he can do for this team just in time to take that confidence to New Orleans with him.

3 – Christian Braun – Braun’s mini five-point run was so big to kick-starting KU’s second half run and it featured one of those emotional moments that have become his signature on the court. Charging hard to the rim, Braun flushed a two-handed jam to tie the game at 40 and then followed that up with KU’s first 3-point make of the day to give the Jayhawks the lead they would never relinquish. He finished with 12 points on 4-of-9 shooting and added 6 rebounds, 4 assists and 0 turnovers in what turned out to be an all-around solid night after he officially woke up.

4 – Jalen Wilson – You can look at Wilson’s 1-for-8 shooting numbers and easily conclude that he didn’t play very well. If you do that, though, you probably didn’t watch the game. Wilson was far from perfect. And, yeah, you’d like to see him make more than one shot in eight tries. But his 11 rebounds — and, more importantly, the fact that grabbing them gave him the ability to aggressively push the ball up the floor with tenacity each time — might have been as big as any single stat of the entire night.

5 – Mitch Lightfoot – The numbers don’t wow you — especially that 3-for-8 mark at the free throw line — but there’s no denying that Lightfoot’s impact was massive in this one. He was active, aggressive, assertive and confident, and his ability to play as close to the way he did in the Big 12 tournament in Kansas City gave the Jayhawks something extra inside to pair with McCormack. With another week of rest and rehab before the Final Four game, Lightfoot should be ready to go, perhaps at 100% again, for what will be the final one or two games of his Kansas career. He’ll find a way to stay calm through all of that, but you can imagine what kind of fire and passion he plans to bring to the team this week.

6 – Remy Martin – I actually thought this was just an average game for Martin and that’s mostly because not every shot he took went in. Playing in his familiar spot of checking in at the first media timeout, Martin was good again, though, knocking in 4 of 9 shots for 9 points and 6 rebounds in 24 minutes. One was a 3-pointer that was mostly just piling on and a couple of others either came in the form of hard drives to the rim or pull-up jumpers. Martin is so clearly comfortable both in his own skin and with his role on this team, and that combination is creating quite a product in crimson and blue. Self mentioned it after the game and it’s clear as day to see: This team carries a different swagger now that Remy’s a major part of it.

7 – Dajuan Harris Jr. – Harris was by no means bad in this one. He just didn’t stand out the way the six guys above him did on a night when everyone in a Kansas uniform played well in the second half. He did finish with three turnovers and had a couple of noticeable defensive lapses. But he did a good job when he was on Kameron McGusty in the second half and the KU point guard continues to be a massive part of this team’s championship puzzle.

8 – KJ Adams – His play in the final 29 seconds of the first half could not have been much more important. Switched onto McGusty for the final shot, with Miami already leading by 6, Adams stayed strong and followed every move McGusty tried to make, forcing a late turnover that kept the score at 35-29 and giving the Jayhawks a little bit of a lift as they headed into the locker room at the break. As McGusty fired up a half-shot-half-pass looking thing with the final seconds ticking away, Adams pumped his fist furiously, knowing he had done his job. The play happened right in front of me and it was pretty cool to follow his eyes and feet throughout the defensive stand. At one point, he glanced down at the other shot clock to see how much time was left so he had a better idea of when McGusty might go. Heck of a play in a huge moment for a guy with absolutely no experience on that stage.

9 – Jalen Coleman-Lands – He finally hit a 3-pointer late but misfired on his first four attempts while playing a handful of minutes in the second half. Coleman-Lands has not lit the world on fire lately, but he’s a guy who still seems to have that look that the ball is going in when he releases it. Whether it does or not will determine how much he plays from this point forward, but knowing that he’s always trigger-ready and capable is a nice luxury to have sitting on your bench.

10 – Zach Clemence – He played just the final 2 minutes and grabbed one rebound. There’s absolutely nothing wrong with Clemence or this role. His future remains bright. This is just as big time as it gets, and it’s crystal clear that Self is going to ride with the guys who know what that means and have experienced that before.

11 – Joe Yesufu – No stats in 2 minutes, including the same 29 seconds that Adams played at the end of the first half to give KU’s rotation guys a break and keep Martin from picking up a cheap foul late. They might not sell it as an NFT but Yesufu was ready when called upon.

Matt, you ranked Jalen 1st, and Remy 2nd last game and this game David 1st and Remy 6th. But Remy is chosen as the MVP of the midwest region.

I agree with your rankings. His offense was solid both games, is that the only thing they look at to choose the MVP?

The regional awards considers all of the first four rounds of the tourney. And Remy was KU's standout player so far through the tourney regardless of the numbers he put up in the regional final.

And I think that offense is probably the main thing they look at... kinda like any individual award... how often does a defense player win league MVP in football? Or the Heisman for that matter. It's usually a QB or an RB.

Baseball is a little different because the game so often boils down to a battle between pitching and hitting.

KJs D was the turning point.

DaJuan’s D on McGusty in the second half was also pivotal.

It’s a completely different game if McGusty takes whatever shot he wants to end the half and is able to continue getting whatever he wants in the second.

JWil being able to guard their stretch 5, keep him from doing much of anything, and keep that pressure off of David was pretty pivotal and a great coaching decision.

It is fascinating that Harris basically shut down McGusty in the second half. I would never have guessed that was possible.

I wasn't surprised. Harris has done that before, in this season.

Juan gets overlooked because as Coach said (about Ochai) that most people evaluate performance based on whether a shot goes in. Good basketball performance is about so much more, though you can’t win without scoring.