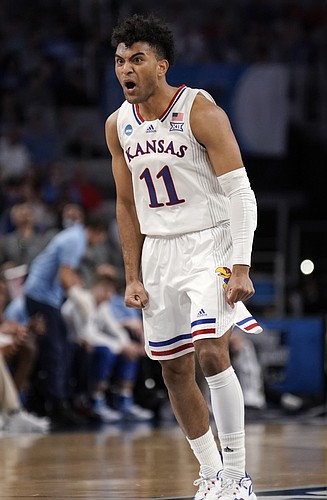 Kansas guard Remy Martin (11) celebrates a run by the Jayhawks during the second half on Saturday, March 19, 2022 at Dickies Arena in Fort Worth, Texas. The Jayhawks advanced to the Sweet 16 with a 79-72 win over the Bluejays. by Nick Krug

1 – Remy Martin – Bro. Duuuude. Yo. What this guy is doing right now is absolutely insane. And, the craziest thing about it is that it’s exactly what everybody expected him to do all season long when he announced he was transferring to KU. Say this for the man: He’s got impeccable timing. Finally healthy, and getting stronger every day, Martin’s on some kind of heater. He scored 35 points and grabbed 8 rebounds and 8 assists with just one turnover in KU’s two games in Fort Worth. That included a KU-high of 20 points in the 79-72 win over Creighton on Saturday. His production is important and it has to make KU pretty tough to guard and prepare for. But his energy is just as important. He brings an immediate left the second he steps on the floor and is playing as hard as I can remember seeing just about anyone play during my time covering college basketball. He came to Kansas to win. And, as of late, he’s been a huge part of the reason KU is doing just that.

2 – Jalen Wilson – Had he shot it juuuuussst a little better, Wilson might’ve been No. 1 on this list. That’s even with Martin’s big day. He was terrific from the jump going after the ball on the glass and continues to show that there are few power players better than him in the entire country when it comes to driving downhill. His ability to maintain his balance and finish through contact is insane. It’s far and away the biggest area of improvement he made this season and, if he ever finds his shot on a more consistent basis again, he’ll be damn near unstoppable. The 14 boards were one shy of tying a career-high. You can’t ask for anything more than that kind of performance from one of your best players at the most important time of the season.

3 – Ochai Agbaji – He shot just 5-of-14 and had a really rough first half shooting the ball. But he stuck with it, kept taking good shots and hit some huge ones in the second half. None, of course, was bigger than the steal and left-handed dunk that put KU up 3 with 49.4 seconds to play. Agbaji is benefiting from Martin’s emergence and still getting the shots he needs and wants. He’ll start hitting them again soon, and, when he does, the Jayhawks will be awfully tough to beat. Agbaji added 3 assists — a pretty high number for him and his role — and 2 steals in 35 minutes.

4 – Christian Braun – He hit a big 3-pointer that should’ve been the dagger and also was insanely good getting to the rim in transition. That’s two games in a row now where the message to Braun from the bench early on was to wake up. And while I understand why they’re saying it I’m not sure it’s a matter of him not being game ready. These are big games. Bigger than any he’s ever played in. And they come with a whole different feel than other games. That can cause you to press and battle for even some of the simplest tasks. The good news for KU with Braun is, he’s such a competitor and gamer that even on a day when he was slow to get going, he still finished with 13 points, 8 rebounds and 4 assists while playing 38 minutes.

5 – David McCormack – His big block in the game’s final minute was reason enough to put him fifth. He also added another block and swiped a couple of steals. His 2-for-8 shooting performance was not ideal. But neither was the matchup. Give McCormack credit for keeping his head where it needed to be in order to make that block late on a day when he easily could’ve been so frustrated that it took him out of the game completely.

6 – Dajuan Harris Jr. – Harris hit a big shot early but it was clear that even that was not going to take Creighton coach Greg McDermott out of his defensive game plan. As a result, Harris sat in favor of Martin, the bigger offensive threat, leaving Harris with an altogether quiet day. He hit two big free throws, dished two assists and did not turn it over. Here’s the thing, for those of you who out there who think that Remy Martin should be starting: He shouldn’t. The vibe the Jayhawks have going at the point guard position right now is perfect. The two are handling their roles perfectly and playing well, both in place of each other and while they’re out there together.

7 – Jalen Coleman-Lands – Coleman-Lands was a perfect 2-for-2 in this one, on decidedly different shots. The first came on a tough offensive rebound and put-back that turned out to be a pretty big bucket, if for no other reason than because it showed his continuing willingness to scrap for whatever he can get to help this team. His second, a wide-open 3-pointer from the wing in front of the KU bench felt, at the time, like it might be the dagger. It wasn’t, of course. But give JCL credit for knocking it down. He had all day to think about it and buried it. His defense continues to limit his minutes, but as long as the Jayhawks don’t face overly athletic teams — especially on the wing — he should be able to maintain the role he’s had so far this postseason.

8 – Mitch Lightfoot – When it comes to Lightfoot, the best news about KU’s win on Saturday is that the veteran big man now has almost a full week to rehab his injured knee. Give Lightfoot a ton of credit for getting ready enough to be out there this weekend. He certainly looked good enough and played with a ton of heart. But he also was noticeably slower and less explosive than he showed the week prior in Kansas City. With each passing day, though, his potential to help this team moving forward improves.

9 – KJ Adams – Adams got a few minutes in the first half, to see if his athleticism on the perimeter could help slow down Creighton’s smaller lineup. But he lasted just 4 minutes and didn’t make an impact. He missed his only shot on one he probably should’ve made.

10 – Joe Yesufu – It was a pretty rough game for Yesufu, albeit in limited minutes. He didn’t take a shot and turned it over twice — in pretty close proximity to one another — while playing just 3 minutes. Martin’s emergence has significantly impacted Yesufu’s opportunities. He still has value as a ball handler and energy lift off the bench. But his presence is not nearly as critical as it was a month ago.

Matt, you nailed it again. Remy is a stud. Absolutely a beast. Wow. If he would have been playing in earlier games that we lost as compared to his past 3 games or so, our record would be considerably better.

What an incredible asset to have during the NCAA and Big 12 tournament, especially with our mainstays surprisingly being off somewhat.

Jim Jackson, the All American, specifically questioned how long Self could keep him out of the game after the second half started. He came in and boom the scoring greatly tilted in the favor of Kansas. Huge net/net difference-maker. Maybe the difference in whether we play on or went home after today.

I could tell Joe was not in it, his turnovers were pretty bad today, off night.

Much as I hate the mid-range jumpers, I understand they are important, and I guess if anyone is going to take them, it should be Remy & Och. But Remy's speed at times reminds me of Tyshawn Taylor, I want to see him slash to the basket more. In fact overall, it seemed like maybe we were half a step slow in transition, I thought we could have gotten more baskets there.

Had to take a cough drop after this one was over...looking forward to Thursday night!

CB had great D at the very end as well. Not sure if he was credited with a block.

All 3 wings are just so strong and complimentary.

It’s disappointing that we can’t be more confident in being able to dump the ball into the post for a basket late. It was encouraging to hear that David is leading the country in OR, or at least I thought that’s what they said.

Should have checked first. Oscar is way out in front of everything related to rebounding. I obviously misunderstood the comment.

Couple of DMacs shots were so bad, I wondered if it was the broad side of a barn he was aiming for if he would have hit it.

Dave, we need the good DMac back for the rest o the games. Please. Also, it would be nice to get the tip-off at the start of the game sometimes. (At least you hit your free throws.)

JW was solid, he looked like he had an extra gear all game. JW is my top player for this game. His rebounding was big. OA, Remy solid efforts. Dmac kept trying, loved the block. CB as well.

We did enough as a team to win. I think the bluejays played hard and inspired.

Great work Matt. I think you are right on the Harris/Martin issue. The team dynamic seems real good right now with Remy coming off the bench. But I'm sure coach is thinking about how long he can keep a hot player on the sidelines. It almost seems like each minute we have Remy on the bench, we have lost some chances to run a faster paced offense. I love Harris, but the Creighton decision to play way off him and use their 5 on our other 4 did bog down our offense. Hope other teams don't do this.

The Jayhawks are lousy at running opponents off the three-point line. KU ended up making Creighton look better than they were.

Robert - So because KU wins by more than your single point prediction, you’re feeling compelled to make another negative comment, or are you just part of the bizarro world reality?