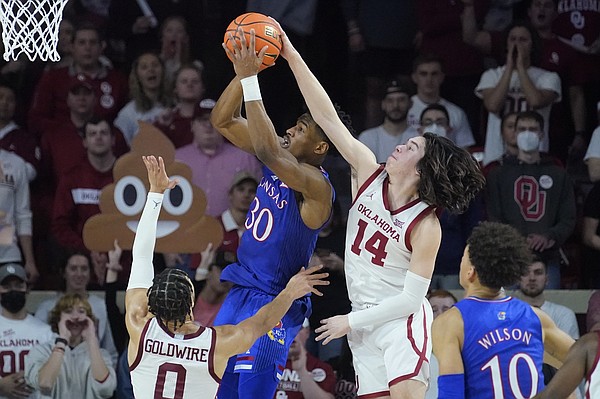 1 – Ochai Agbaji – I’m not going to let the wrist injury, which came as the result of a hard-nosed hustle play, diminish what Agbaji did in this one. Bottom line: KU doesn’t come close to winning without him. Not only did he hit three clutch shots and critical times down the stretch, but he also made the right read on what turned out to be the game-winning shot by Christian Braun. Agbaji didn’t score until the 5:25 mark fo the second half and still finished with 10 points and 5 rebounds while figuring out how to play and deliver with one incredibly sore wrist/hand. Agbaji walked out of Lloyd Noble Center with his left wrist wrapped and packed in ice. KU coach Bill Self said the X-Rays were negative, but there’s little doubt that it’ll be sore for a couple of days. At least he’ll have some more time to figure out how to play through it and with it before the Jayhawks head to Manhattan to take on the Wildcats, who just knocked off Texas Tech and Texas in back-to-back outings.

2 – Jalen Wilson – Self said last weekend that Wilson was back to where he needed to be and he has that look about him now that shows that that’s correct. Wilson hit 60% of his shots, grabbed 8 rebounds and turned it over just once in 35 minutes. He looks fast all over the floor. He attacks with a purpose on almost every possession and seems to have settled into a comfortable space where he believes that sharing the ball is both the best thing for the team and a great way for him to get open shots and scoring opportunities of his own. In many ways, it feels like Wilson’s still just getting started on what he can do this season.

3 – Christian Braun – Braun played through foul trouble and did not let that take him out of his game. He competed hard on both ends and obviously stayed ready for the big moment when it came. His game-winning 3-pointer with 10.9 seconds left was simply a big time player making a big time play. With the clock winding down and the road crowd roaring, Braun jumped up and drilled a tough shot. The 3 was huge but the two free throws and his ability to be strong with the ball when KU had a hard time getting it inbounds were equally as big. Braun’s words and icy glare for the OU fans who were riding him was the latest instance of him showing that he’s got that kind of killer personality that this team can benefit from and might need in tough spots.

4 – Mitch Lightfoot – Limited to 14 minutes in the kind of role he’s become so comfortable playing, Lightfoot was big in this one. He made 4 of 5 shots, grabbed a season-high tying 6 rebounds and battled for every loose ball and defensive possession while he was in the game. Nine points on a night when the team scores 67 and wins by three is pretty significant.

5 – Dajuan Harris Jr. – Harris hit three big shots early and scored 7 of KU’s first 9 points. He then missed his next 7, most of them shots that he would make 9 times out of 10. Chalk it up as one of those nights, I suppose. And while the three turnovers were not ideal, he canceled them out by dishing four assists and swiping two steals while playing 35 critical minutes. He still gets picked on and physically pushed around from time to time, but the KU point guard was this close to having a pretty big offensive night. He’ll make those shots more often than not and the fact that he’s becoming more willing to take them was a better sign than the misses were a bad sign.

6 – David McCormack – Shot just 3-for-7 and finished with 6 points and 4 rebounds. Somehow, it didn’t seem like a total failure, though, the way many of his earlier games with similar numbers did. Maybe it’s because McCormack battled hard against OU big man Tanner Groves all night and because Groves’ numbers (8 points and 5 rebounds) were only marginally better, making the battle of the bigs a wash of sorts.

7 – Remy Martin – He had his moments and looked like himself at times. But, as Self alluded to in his postgame press conference, he also looked rusty and turned it over too many times (twice in his 15 minutes). Thirteen of Martin’s 15 minutes came in the first half and quietly swiped two of KU’s five steals on the night. He spent most of the second half draped in towels on the bench while the KU starters willed out a win. Regardless of his numbers, just seeing Martin back on the floor was a key first step in him shaking off that rust and contributing meaningful minutes for the stretch run. As long as the knee responds well and he can get back out there again on Saturday at K-State, this was in many ways a win.

8 – KJ Adams – No stats of any kind in his three minutes on the floor. Self said this was a piece it together kind of win for the Jayhawks, and minutes like these from Adams, Yesufu and Coleman-Lands, though far from impressive for their individual statistical value, helped Kansas survive even if it was just barely.

9 – Joe Yesufu – Played just two minutes and did not record a single stat. See Adams’ entry. Adams gets the nod at 8 over 9 for playing the one extra minute.

10 – Jalen Coleman-Lands – Three turnovers in just 5 minutes makes for a pretty rough night. Colemen-Lands did hit the only shot he attempted and grabbed a rebound, as well, but he was not out there enough to impact the game in any profound way and when he was, the Sooners took control of the game.

This was a tough one. Braun and Wilson both could have easily been 1st as well. Maybe should have been a three-way tie.

I can see D-Mac landing at 6th for last night based on his stats, but I think you're being a little too hard on him in your narrative. They were going after him hard, and I think he availed himself pretty well, though my only negative for him last night was taking those jumpers. His stats weren't great, but I thought the effort was there.

I agree. He did make at least one long jumper, and he also made some great passes, the one in particular to Jalen Wilson along baseline past two defenders was nuts! He was decent last night, despite the weak stat line.

Objectively speaking, I think Ochai should be in the 3rd highest position. That said, I hope he plays well enough to land in 1st position from here on out. Looking forward to a high draft position for him and, hopefully, being joined in the NBA with Braun and Wilson.

When everyone is playing to their potential, we can beat any team in the country.

That said, the ups and downs for some individuals seem to be greater, on average, than I can recall years' past.

If DMAC's stats were graphed out, he would have some of the highest highs and lowest lows of any 5 in the country.

DMAC, please stick with your awesome highs. If you do that, we can go deep in the NCAA tourney and may you, too, can get paid to play B-ball somewhere!