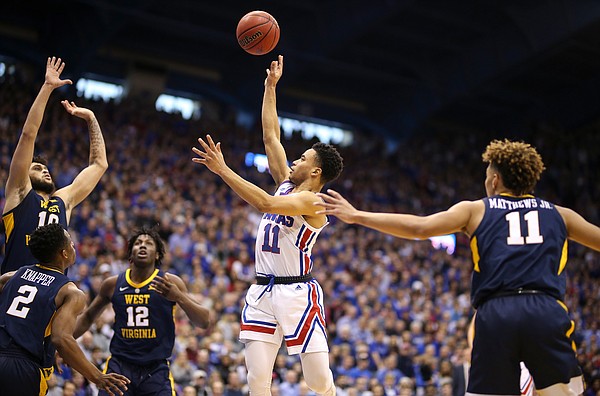 Kansas guard Devon Dotson (11) floats a shot over the West Virginia defense during the first half, Saturday, Feb. 16, 2019 at Allen Fieldhouse. by Nick Krug

1 – Devon Dotson – So good early on and as fast as ever. He appears to be in complete control of both himself and this team. Finished with 15 points, 8 assists, 5 rebounds and just 2 turnovers.

2 – K.J. Lawson – He hit a couple of shots but did much more than that in the early going to earn this ranking. His energy was good, he hit the glass and also was aggressive offensively attacking the rim off the dribble when KU needed someone other than Dotson to do it.

3 – Mitch Lightfoot – Blocked a couple of shots, flexed a couple of times and had a few points and some big rebounds. Lightfoot Lightfooting is what they call it and it has become an incredibly important part of this team.

4 – Dedric Lawson – Nothing special here, but Kansas didn’t need it. Lawson finished with 9 points and just 3 rebounds on a day when the rest of his team absolutely rolled. I’m sure he’d be the first to tell you he’s completely OK with that, and his presence out there alone definitely played a factor in this game.

5 – Ochai Agbaji – This one, more than most of his games, had the element of things not going 100 percent well for Agbaji, with turnovers, missed shots and awkward missteps all a part of his afternoon. But if that’s what Agbaji looks like on an off night, KU will still absolutely take it. His energy and effort impacted this one way more than his 8 points.

6 – David McCormack – Blocked a couple of shots, hit a couple of buckets off of post-ups and still looked a little sped up and frantic at times. That’s all part of the David McCormack experience at this point, which is slowly but surely starting to round into form. Logged 10 points, 4 rebounds and 2 blocks.

7 – Quentin Grimes – He started well, with a couple of nice assists and aggressive plays. But those didn’t last and his shot never came. Drew plenty of attention and elevated instruction from the bench throughout the night.

8 – Charlie Moore – No one likes throwing lobs to Agbaji more than Moore. He did it again in this one and also played within himself better than he had in other recent games.

Are you sure about the 9 points for Dedric? All the box scores I find show him with 14 points.

Didn't Q run the team near the end of the first half? That's a pretty important role as much for what didn't happen as what did. The team has crumbled in the past when Dotson has gone to the bench. Eventually, the shots will start falling for Grimes. Charlie too. A week ago, KJ was deep in the doghouse of ineffectiveness. How quickly things can change.