Kansas third Big 12 foe in a row for Villanova 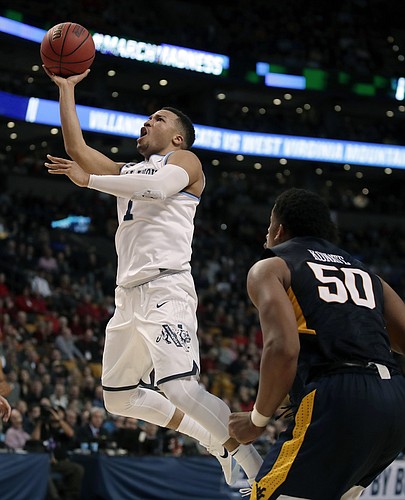 San Antonio - Villanova, which competes in the highly competitive Big East, is getting a taste of what it’s like to play in the brutal Big 12.

So far, the Wildcats are handling it just fine, but the toughest test awaits in the form of regular-season and conference-tournament champion Kansas on Saturday, approximate tip 7:49 p.m. Villanova knocked off West Virginia in the Sweet 16, 90-78, and Texas Tech in the Elite Eight, 71-59, and scored the victories in very different ways.

Does it help that Villanova is coming off a pair of games against Big 12 schools?

“I don’t think it hurts,” Kansas coach Bill Self said.

(Speaking of things that can’t hurt, it had to be reassuring for Kansas basketball fans to see legendary Larry Brown, coach of KU’s 1988 national-championship team, stepping off the team bus. Brown spent time with the team during the 2008 tournament as well. What a great mind to have as a sounding board.)

The Wildcats did in fact make 13 of 24 3-pointers against West Virginia, as well as 23 of 27 free throws. Villanova turned it over 15 times against the Mountaineers' pressure.

“And then against Tech they didn’t make any shots, but they found a way on the glass to control them,” Self said. “Yeah, I don’t think it hurts. We talked to one of those teams a lot. We’ll talk to the other one and see if there’s anything from a scouting standpoint they picked up on them.”

Villanova made just 4 of 24 in the 12-point victory against Tech and relied on great defense and rebounding to win by a dozen points. The Red Raiders shot .333 overall, .250 from 3 and lost the battle of the boards, 50-28.

Kansas went 3-0 vs. West Virginia and 1-1 against Texas Tech.

Can we just hire Larry Brown as the ambassador to KU basketball or something? The guy should be forever part of this program until he's ready to be done with basketball.

Does Larry Brown live in Lawrence now, or is he just hanging there during this tournament?

That is called Head Coach Emeritus. We all would be fine with that honor.

Then, not unlike Westminster Abbey we need to relocate the graves of the Lords/Knights of College Basketball to the lobby of Allen. The list would be something like this and each one would be placed in ornate sarcophagus' for us to gaze at for eternity.

Naismith, Allen, Harp, Dean Smith, Brown (when ready), Self (when ready, no hurry please) and any future member of the coaching tree who is worthy.

These gentlemen are also welcome any time they want to relocate: Rupp, Williams, Then, Allen would truly be America's College Basketball Shrine

Aren't the graves up the hill across Iowa? I don't think we need to exhume anyone but maybe just a perpetual offer.