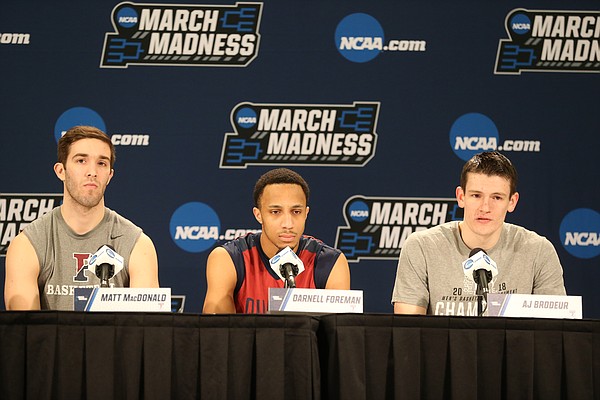 Wichita — Nearly as significant as Penn holding opponents to a .296 3-point percentage (second in the nation to Grand Canyon) is that the Quakers also do a nice job of limiting the number of 3-pointers taken by foes (32.8 percent of field goal attempts against them are 3-pointers, 37th nationally).

How do the Quakers do it?

"Our main goals are to limit the 3-pointers taken by flying around, making the shooters activate their dribble, start to get to the hoop and then guarding at the rim without fouling, forcing long contested twos are ideal for our defensive system," said sophomore forward A.J. Brodeur, unanimous first-team All-Ivy League and Ivy League tournament MVP.

Senior guard Matt MacDonald said the Quakers try "to run teams off the line," and do "everything with a great amount of energy and just toughness. You can say all that and have that as your philosophy, but if you don't play hard to a certain extent and really try to execute the game plan, it really means nothing."

"Obviously they're going to present as much problems as anybody we play, probably with the exception of Villanova," Donahue said of the Jayhawks. "It's how we build our defense, and we like to take advantage of the 3, and we don't want to give up those 3s. So I think the thing that makes us a little different for this level is that we have some athleticism in our guard spots. We have good length, move well laterally."

Keys to the game:

1.) Smother Penn on defense and make them work for EVERY shot. This game was set up for a potential upset and we cannot give the KU haters what they want.

2.) Make smart shot decisions by not forcing them and make your free throws.

3.) Go down low to Silvio as he's proven he can score. This will open up pandoras box to an easy win.

And before the game I'd say, "Is this your last game of the year? Because there are a lot of people out there that think so. Let's prove them wrong, again. Clear eyes, full hearts, CAN'T LOSE!'

I'm not sure that that is how a Pandora's box works....

or I guess that it could be exactly how a Pandora's box works. After all, who am I to tell you what is inside