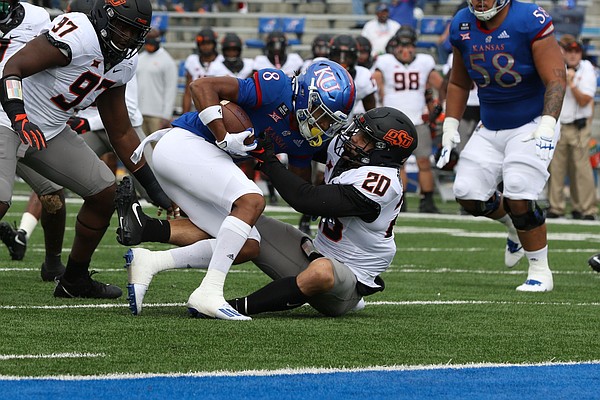 KU's Kwamie Lassiter Jr., is dragged down by an Oklahoma State defender during the Jayhawks' 47-7 loss to OSU on Saturday, Oct. 3, 2020 at David Booth Kansas Memorial Stadium. by Scott Winters

Kansas receiver Kwamie Lassiter II will be one of two representatives for the Kansas football program at Big 12 media days this week, and it is hard to think of someone more deserving than Lassiter.

Lassiter has climbed up the ranks during his career at Kansas, going from walk-on to leading receiver on the team. Lassiter hauled in a team-high 43 receptions last season for 458 yards and two touchdowns on his way to becoming an All-Big 12 honorable mention selection.

Because of the COVID-19 year, Lassiter will get one last season with the Jayhawks in 2021. The super senior will serve as the leader of an inexperienced wide receiver unit while KU deals with the transition of coaching change.

That is ultimately why Lassiter is an excellent choice to answer questions about the program while in Arlington, Texas on Thursday. Before then, let’s take a closer look at Lassiter’s strong season in 2020 using NCAA Premium Stats over at Pro Football Focus.

Here are three things that stood out about Lassiter’s first senior season:

Given his 6-foot, 171-pound frame, Lassiter seems like an ideal fit in the slot. And that was where he usually lined up at first, running 85% or more of his snaps from the slot in each of his first three seasons with KU.

This level of versatility can only be a good thing. While it might lead to more difficult matchups at times, Lassiter is now able to be on the field more often for KU.

Lassiter has actually proved to be quite successful in contested-catch situations over the course of his career. Of course, 2020 was his best season yet in that aspect.

But it doesn’t appear to be a noisy single-season sample size either. Lassiter caught five of his 11 targets in contested-catch situations over the previous two years at KU. That is really a testament to Lassiter’s strength and body control in these scenarios.

Had most success while running slants

Per PFF’s 2021 college football preview magazine, Lassiter’s route tree has been limited while at KU. Lassiter likely wasn’t used as much on deep routes because of the combination of quarterback and offensive line play, both of which were underwhelming.

In terms of production, Lassiter’s top-three routes last fall were a slant, hitch or an out. He grabbed 27 receptions on one of those three route combinations alone.

Lassiter actually caught all 10 of his targets while running a slant. He turned those 10 receptions into 114 total yards.

It will be interesting to see if Lassiter is able to expand his route tree during his final season, assuming KU can make strides along the offensive line and at quarterback.

So glad to have Kwamie return, both for his production and leadership as well as mentally reliving a bit of his dad’s career when hearing his name.