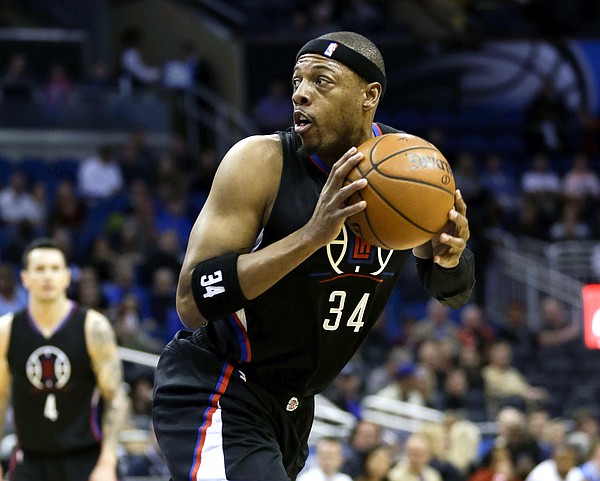 Los Angeles Clippers forward Paul Pierce looks for an open shot against the Orlando Magic during the first half of an NBA basketball game, Friday, Feb. 5, 2016, in Orlando, Fla. (AP Photo/John Raoux)

Paul Pierce, in his 18 NBA seasons following three years at Kansas, has seen it all in the game of basketball. The 38-year-old forward recently imparted some of his hoops wisdom with a young prep player for a feature on The Players’ Tribune.

Pierce, a contributing editor for the site, met with a high school guard named Oscar Lopez, who plays for a team in Pierce’s “The Truth” AAU program. The two of them broke down video and ran through some drills for a segment called “Scouting Myself.”

Before meeting Lopez for the recurring piece, which in the past has featured NFL players Greg Olsen and Clay Matthews, Pierce explained the origins of his interest in AAU basketball and how his own experiences led to him setting up a program.

“In the AAU circuit, you get to play against all type of players. You know, you’re playing against the best of the best,” Pierce said. “There’s some guys on my AAU team that I still talk to today, because we were able to develop that family atmosphere, and that’s what I want to have in my program.”

In particular, the Los Angeles Clippers forward said he wants to give kids a sense of direction.

“I just want to be somebody who they can come to who has no other agenda for them,” Pierce explained.

After surprising the youngster with a visit, Pierce turned into a coach of sorts, watched some game footage with Lopez and gave him some constructive criticism, while also praising him for his pump fake and balance on a move that led to an open jumper.

The two then went out to the court to work on some drills that Pierce told Lopez would help him in the long run. Among other tips, the veteran recommended the prep take jump shots with a band around his lower legs, forcing him to work on his balance.

The session closed with Pierce providing a pep talk, advising Lopez to focus off the court, as well, with an emphasis on the importance of staying on top of school work and “doing the right things.”

Pierce is reportedly leaning toward returning for a 19th season in the NBA, and has two years remaining on his contract with the Clippers.

Nothing official, but person close to Paul Pierce says he intends to play next season.

None by Ben Bolch

— Watch The Players’ Tribune’s entire “Scouting Myself” video with Pierce below:

Paul Pierce - Scouting Myself by The Players' Tribune