Tarik Black fitting in with Lakers 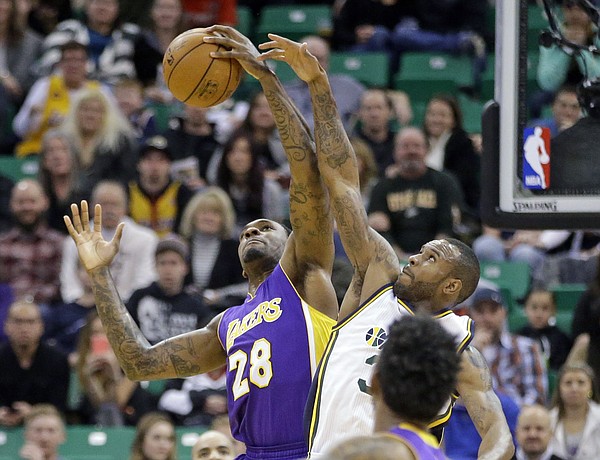 This, of course, has nothing to do with the Western Conference standings — the Lakers are 12-30 and basically irrelevant in terms of the eventual postseason. But the Rockets had to waive Tarik Black in order to add Smith to their roster.

That move allowed L.A. to pick up the undrafted rookie out of Kansas, without making a trade. Grantland.com is calling the under-the-radar transaction the waiver wire pickup of the year in a feature introducing fans to the Lakers’ unlikely productive backup.

Black’s best game in purple and gold came in a Lakers win — the team’s only victory in its last eight games — against Orlando. He came one rebound shy of a double-double, with 14 point and nine boards.

The Lakers are glad to have the young guy around, and he couldn’t be a better teammate. The Los Angeles Times’ Mike Bresnahan recently wrote about the way Black carries himself. The rookie constantly thanks people with whom he interacts — a trait that showed up when he was in Lawrence for a season, as well.

Black looks at his young NBA career as an “opportunity,” and he told the L.A. Times why he is so grateful.

"As soon as I walked through the door, coach shook my hand and told me that as long as I work hard, I'll be all right out here. Usually coaches don't even really talk to us like that unless you're their franchise player or their top draft pick," Black said. "Undrafted guys? They don't give you the time of day. Coaches here have shown me love from day one."

Black suffered the first setback of his first year in The Association on Monday night, in Phoenix. He sprained his right ankle after scoring 6 points and grabbing 3 rebounds in 21 minutes. 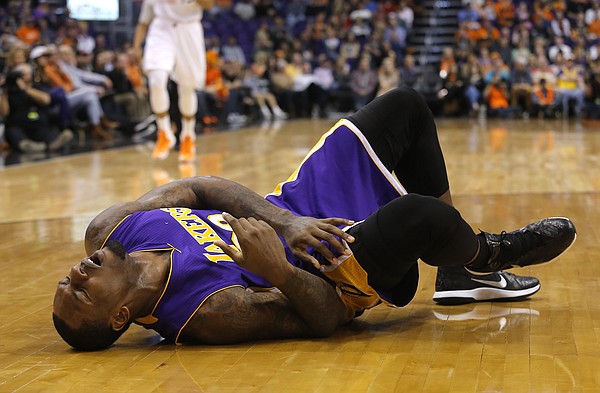 He appeared to be suffering badly when it happened, but Black told Time Warner Cable Sportsnet afterward it wasn’t as bad as it looked.

“I’ve sprained my ankle a couple of times, so I wasn’t really worried, because I didn’t hear anything pop, didn’t come out of place or anything like that.”

Asked after the game if he would miss any games because of the ankle, he remained optimistic.

Don't be surprised if Tarik Black misses Friday's game at SAS as well w/t ankle, but he hasn't been ruled out yet (he IS out for NOP).

None by Mike Trudell

Knowing Black’s attitude and approach, this minor setback doesn’t figure to deter his path toward a successful rookie campaign.

I'm good. Just an ankle hurt. Hurt so bad when it happened I had to lay there for a second but X Ray was negative. Now it's rehab time

Glad he ended his collegiate career at Kansas. Just imagine if he would've spent his entire college basketball career as a Jayhawk. I do miss his leadership, passion, and strength. All the best Tarik.

I am so glad for Tarik. I miss seeing him at KU. He was a great player and a great person while in Lawrence. I am sure he will continue to be the same wherever he is.

Great news! I hope he has a long and productive career (although I'm sure he'll be a success in whatever he does).

It's always nice to see such a nice person do well and succeed at what he wants to do with his life. He's a class act.

Here's a tip of the cap to you, Tarik. Well deserved.

In March, if someone had told us that KU could land 2 on the NBA All-Rookie Team, how many of us would have thought the "other guy" would be Black? And yet, that is possible.

We knew what we had in Jo Jo, but I don't know how many of us appreciated what Black brought--the ability to let Perry work without having to be the primarly guy on the low block. Took a big body to handle Black. Love this kid--his faith, his attitude, and the way he treats people.

Great job against the Magic TB! I am so glad he's finding a system he can excel in.