The first handful of games tipped off Tuesday, and nearly every other team played its opener by Wednesday, marking the start of the 82-game grind. 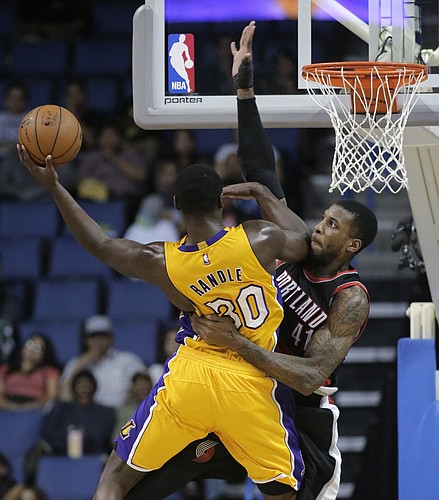 In his still young NBA career, Thomas Robinson has called three different franchises home. He could be changing zip codes again, bringing that number to four, by the time his fourth season rolls around.

Reports surfaced earlier this week — days before the start of the regular-season schedule — that Portland wouldn’t exercise its option on Robinson’s contract, choosing instead to let him become a free agent next summer.

Obviously, this made Robinson, a Trail Blazers backup who doesn’t typically get a ton of media attention, a popular interview on the eve of his team’s season opener. The Oregonian’s Jon Freeman detailed Robinson’s Tuesday Q & A, as reporters asked about his reaction to this personally disappointing news.

While this move by Portland could be some incentive for Robinson to prove himself and earn that next contract (maybe from the Blazers) in the months ahead, it also could be a sign the organization isn’t interested in keeping him in its future plans. One could also speculate this decision makes Robinson a more valuable trading chip, because many teams tend to look for expiring contracts that will help them free up salary cap space for the summer.

So Portland figures to have some suitors if it decides to flip Robinson’s contract in a move to brings in some sort of proven veteran(s) that will help the team advance past the second round of the Western Conference playoffs.

Although Robinson can play above the rim on both ends of the floor, it seems the Blazers’ frontcourt depth (LaMarcus Aldridge, Robin Lopez, Chris Kaman) makes him the odd man out when it comes to significant playing time.

Either he finds something within himself to make Portland take notice and give him more minutes, the Blazers try to move him or they keep him around to let his contract come off the books just in time to re-sign Aldridge next July.

Robinson has the athleticism to be an impact energy guy off the bench in the NBA. This season could determine his value, not only in Portland (one of the better teams in the West), but also around the league, for years to come.

I'm still on the T-Rob bandwagon. I see no reason this guy shouldn't be an all-star. Changing teams so much, not getting enough playing time, I think this guy is absolutly a top player. I want to see him succeed so badly.