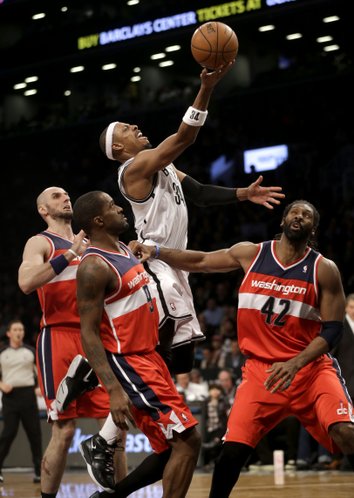 Paul Pierce must be in the gambling mood this summer.

After surviving for three days at the World Series of Poker Main Event last week in Las Vegas, finishing around 800th, the 16-year veteran out of Kansas University shocked many NBA observers when news surfaced late Saturday night he had reached a deal with Washington.

One of seven former KU players in the expansive pool of available free agents this summer, Pierce, like nearly every other veteran in search of a contract, had to wait until LeBron James made his Decision: The Sequel. Once The King announced his return to Cleveland on Friday, the rest of the league began making moves. The Wizards couldn't re-sign Trevor Ariza, who chose Houston. That left a void at small forward for D.C., which Pierce will happily fill after signing a two-year contract worth $10.8 million.

Prior to the deal, reports indicated Pierce preferred to re-sign with Brooklyn or find a way — preferably via sign-and-trade, for more money — to get on the Clippers' roster and reunite with his former Boston coach, Doc Rivers.

The Nets reached the Eastern Conference semifinals this past spring, and could have made a similar or better run in 2015 with Pierce, Deron Williams, Brook Lopez, Joe Johnson, aging-in-fast-forward Kevin Garnett and Brooklyn's key role players — assuming all were healthy.

Had Pierce landed in L.A., near his boyhood home of Inglewood, California, he could have joined a team that has to be considered one of the handful of favorites to contend for the NBA title next year, with Chris Paul and Blake Griffin leading the way.

Instead, "The Truth" decided to move in a different direction, to the nation's capital.

Why Washington? Well, it's a lot easier to reach the NBA Finals out of the East. In 2013-14, nine Western Conference teams won at least 48 games. In the East, just four organizations — Indiana, Miami, Toronto and Chicago — managed to do so.

Plus, LeBron's relocation makes the East wide open. Miami is no longer a juggernaut. Indiana faltered down the stretch last season. And Toronto is no longer in position to surprise anybody.

Chicago, which added Pau Gasol and (presumably) gets Derrick Rose back from his second knee injury in two years, will be a favorite in the East, along with Cleveland (any team with LeBron James on its roster is a title contender).

Still, neither of those teams is a sure-fire bet. No one knows whether Rose can still play at an MVP level and LeBron will be surrounded by guys with little to no playoff experience — and that includes Kevin Love, if the Cavs can swing a deal for the coveted power forward.

Washington could unseat the Heat atop the Southeast Division and find itself among the conference's top three seeds. The Wizards (44-38 in '13-'14) advanced to the second round as the No. 5 seed in the playoffs a few months back. And D.C. has one of the best young backcourts in the league, with John Wall and Bradley Beal. Add Pierce, in a complimentary role, to those two, Marcin Gortat and Nene Hilario, and you've got a lineup that can play with any of the East's top teams.

Pierce is betting on Wall and Beal instead of Williams and Johnson. If his latest gamble pays off, he could be cashing in on a deep playoff run in 2015. 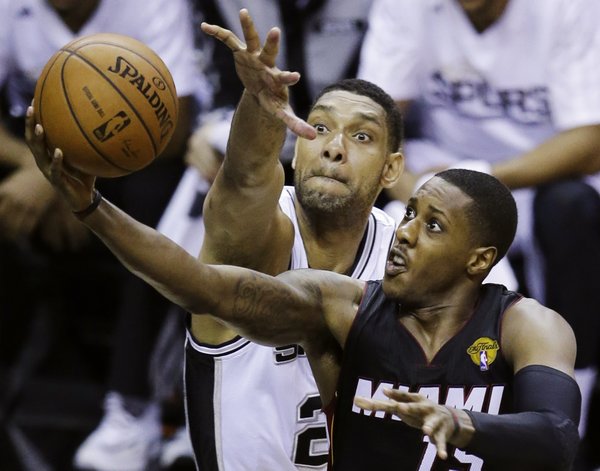 The weekend also brought new NBA contracts for 'Hawks in the NBA free agents Cole Aldrich (New York), Kirk Hinrich (Chicago) and Mario Chalmers (Miami), all of whom re-signed with their previous teams.

The most surprising of those deals, by far, has to be Chalmers' two-year agreement with Miami. A Heat scapegoat in what turned out to be the franchise's last LeBron hurrah, a 4-1 NBA Finals defeat at the hands of San Antonio, Chalmers was yanked from the starting lineup in Game 5 and presumed on his way out of town once Miami drafted UConn point guard Shabazz Napier.

Proud to say I'm back wit the heat. Heat nation we still here

But James' departure left the Heat scrambling, so Chalmers, after averaging 4.4 points, 2.8 assists and 2.0 turnovers in the Finals, finds himself back in the fold with Miami's new Big Two: Chris Bosh and Dwyane Wade. (Big Three if you count newly signed Luol Deng.)

Xavier Henry, Drew Gooden and Brandon Rush remain on the market. Gooden is expected to re-sign with Washington, which would give the Wizards a pair of Jayhawks.

Rush will work out for some NBA teams Tuesday in Las Vegas. Bleacher Report's Ethan J. Skolnick says the Heat could be one franchise interested in the 6-foot-6 shooting guard, who only played 38 games for Utah in his sixth season.

None by Ethan J. Skolnick

Recovering from a torn ligament in his left wrist and an abnormality in his right knee's meniscus, Henry said in June he expects to be at 100 percent before the end of the summer.

ruh roh...wasn't the past few seasons enough for Mario? looks like he's into the whole S&M thing. why else go back to a team that just abuses/berates you constantly?

or maybe they just offered him more money than anybody else was willing to pay. He was making $4 mill last year, I think. Maybe he's just into that whole thing.

Berate me all you want for $4M a year. Heck, I'll even cut you a deal and take $2M per. To top it off, you can fire me/cut me from the roster after two years and I promise not to complain. Where do I sign?

PS--My knees are terrible and I don't get any height on my jumper.