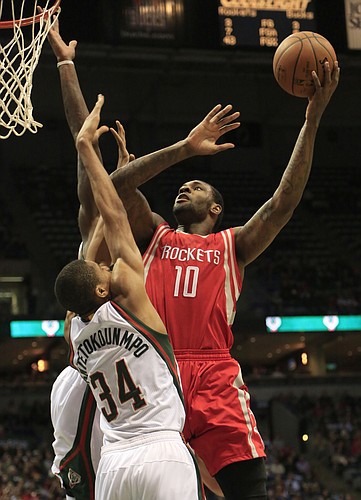 Houston Rockets forward Tarik Black, right, goes up for a basket against Milwaukee Bucks guard Giannis Antetokounmpo, left, during the first half of an NBA game Saturday, Nov. 29, 2014, in Milwaukee. (AP Photo/Darren Hauck)

Two days after learning the Rockets had waived him in order to sign Josh Smith, rookie center Tarik Black has a new NBA home. The undrafted big man out of Kansas couldn’t pass through the league’s waiver system without the Lakers scooping him up.

Black, who had averaged 4.2 points and 5.1 rebounds for Houston, didn’t leave his short-term employer without feeling grateful. Sunday afternoon, he tweeted about his gratitude for the franchise that gave him a shot to make it in the league:

“I would like to thank the (Rockets) for blessing me to be (a part) of such an outstanding organization.”

I would like to thank the @HoustonRockets for blessing me to be apart of such an outstanding organization #grateful pic.twitter.com/ThzSBseRrj

While the news meant the 6-foot-11 rookie would remain in the league, acquiring Black pushed another former Kansas player out. Yahoo’s Adrian Wojnarowski reported the Lakers waived inured small forward Xavier Henry in order to have a roster spot for Black.

Henry, coming off a promising 2013-14 with the Lakers, ruptured his left Achilles in November, ending his fifth season prematurely.

The Lakers only signed Henry to a one-year deal this past offseason, so parting ways with him in order to sign someone who could impact the team now made sense. Appropriately, Henry isn’t taking it personally.

“Nothing has changed,” the 23-year-old tweeted to Lakers fans Sunday afternoon. “I’m working to get healthy everyday. I understand the situation and thank (you) for your wishes (and) good vibes.”

Nothing has changed, I'm working to get healthy everyday. I understand the situation and thank u for your wishes n good vibes #LakersNation

While going from the playoff-bound Rockets (21-7 before facing San Antonio Sunday evening) to the lottery-bound Lakers (9-21 entering Sunday’s game against Phoenix) might not seem like an ideal situation, the 23-year-old Black wasn’t complaining.

“Well, what basketball player doesn’t grow up wising to play for a historic organization like the (Lakers),” Black posted on Twitter. “Thank you for the opportunity, L.A.!!!”

Well what basketball player doesn't grow up wishing to play for a historic organization like the @Lakers Thank you for the opportunity LA!!!

“To the fans of the Lakers, I am honored and can’t wait to get to work. Hopefully I can help this team and you guys will enjoy the process.”

To the fans of the Lakers I am honored and can't wait to get to work. Hopefully I can help this team and you guys will enjoy the process #TU

Black’s signing will give the Lakers another low-post option to go with Jordan Hill, Carlos Boozer and Ed Davis.

Does this ensure Black a roster spot/ salary for the rest of the season? When is the cut-off for that? Or am I not making any sense?

No Black is not guaranteed a roster spot for the year, I would assume Black's contract is prorated and small enough that it wouldn't be a big deal for the Lakers to waive Black if he doesn't perform or if someone better comes available.

Black's in a good spot and the Lakers aren't going to stay bad for long if Black can hang around. I also wouldn't be shocked to see them bring Henry back next year when he's recovered.

Most current non-guaranteed NBA contracts will be guaranteed for the season on January 7, 2015 if they are on the roster then.

I don't know Black's contract language but since he didn't clear waivers, his contract is a standard one-year contract and would be guaranteed on January 7th.

Tarik's contract is not guaranteed. But if he is still on the roster on January 10th, it becomes guaranteed. Also, since the Lakers picked up his $500,000 contract for this year, the Lakers will possess a team option of $845,000 on his deal for the 2015-16 season.

I'm really happy for Tarik, but it sucks that it has to come at the expense of another KU player.

Oh well, I guess that's what can happen when you have so many players in the Association.