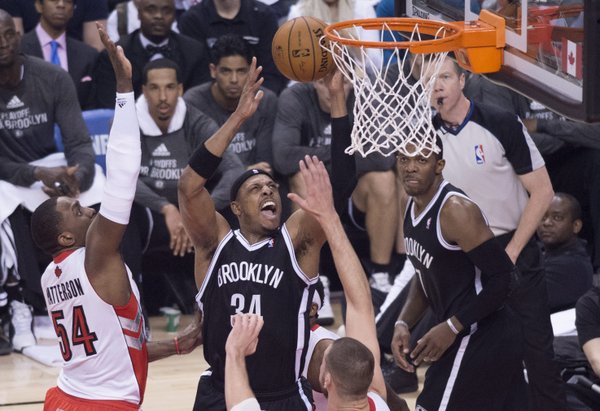 For the first 30-plus minutes he spent on the court Saturday at Toronto, it didn't look like veteran Brooklyn small forward Paul Pierce would play a key role in the outcome of the Eastern Conference first-round playoffs series between the Raptors and Nets.

But when crunch time came around, Pierce instinctively took over, and led Brooklyn to a 94-87 win.

With the Nets holding a slim, one-point lead with less than four minutes to play, Pierce fed Kevin Garnett for his only bucket of the game, then proceeded to tap the fountain of youth and score nine straight Brooklyn points, helping his team amass an eight-point lead with a minute and a half left.

If you squint your eyes enough, it's like watching a young Paul Pierce in Boston green, instead of Brooklyn black.

Paul Pierce has scored the Nets' last 9 points and they lead the Raptors 88-81 with 51.5 seconds left. #BKNvsTOR pic.twitter.com/cZMJSheIIW

Pierce had just six points to his name late in the fourth quarter before taking over in front of a once enthused crowd at Air Canada Centre. NBA.com's John Schuhmann wrote about how Pierce's years of playoff experience helped Brooklyn close out a road win to open the best-of-seven series. Here's what Pierce had to say on the matter:

“You’ve been in those situations a number of times. I don’t get rattled in the fourth quarters, down the stretch of playoff settings. I just try to stay calm, bring my calmness to the game, and just try to influence the rest of the guys.”

"The Truth" isn't The Guy anymore, now that he's in his 16th season out of Kansas. But when the Raptors' defense focused on stopping his Nets teammates, Joe Johnson and Deron Williams, Pierce feasted with a clutch, game-changing run.

“I thought it was part of great execution. They took away our first and second option and I was able to fill in as a third option and make some plays.”

Pierce and Brooklyn resume their series with Toronto Tuesday night. 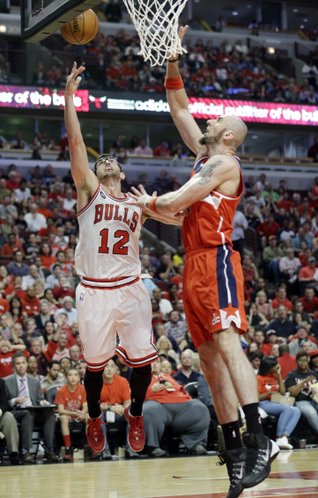 All but one of the 'Hawks in the NBA began their postseason with a win this past weekend, when Pierce (15 points, 4 rebounds, 4 assists) and Chicago's Kirk Hinrich (16 points, 2 assists) stood out with the best individual performances.

Despite a productive night for the Bulls veteran guard (7-for-16, shot chart below), Hinrich was the odd man out among KU products, as Chicago fell, 102-93, to the Wizards Sunday night. 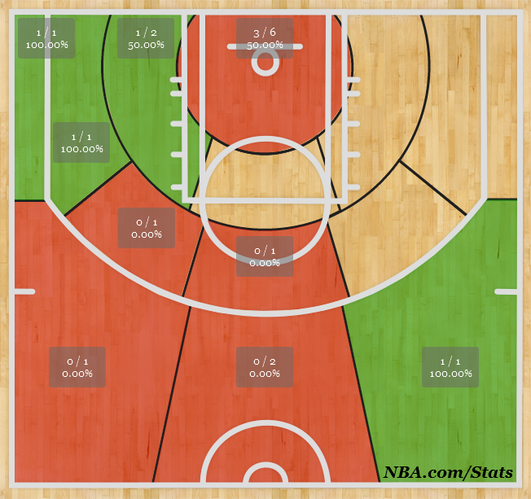 Drew Gooden only played three minutes for Washington and didn't take a shot, but his team prevailed at Chicago. Mario Chalmers had seven points in Miami's win against Charlotte, Thomas Robinson scored three in an overtime Portland victory at Houston and Nick Collison had three points and five rebounds in Oklahoma City's Saturday win against Memphis.

Paul Pierce loves himself some Playoffs.

None by James Ham

Nick Collison w/Lesley McCaslin on @FSOklahoma: Was a physical night. "It was exactly what I expected, every game is going to be like that."

Gettin these legs ready for tomorrow. The journey begins for number 3. One step at a time tho http://t.co/Ye38eXyIHR

I have never heard any K.u. fans say they don't like Paul Pierce. That would be real ignorant of them, because there is absolutely no reason to do anything but love him as a Jayhawk! Now, I never liked Boston, so it was difficult to root for them to win, even though he was there. But I always rooted for him to do well, and even to get a Championship at Boston. It looks really good when a former Jayhawk leads a team to an NBA Championship! Rock Chalk!

now where did all the other comments go? this is strange!!!