Which individual matchups will be the most intriguing? Plus, predictions for KU-N.C. State

Jesse Newell: Welcome back to the GameDay Cram Session, as Kansas is taking on N.C. State on Friday night in the Sweet 16 in St. Louis, Mo.

Matt, what did you learn about N.C. State on Thursday that you didn't know before? 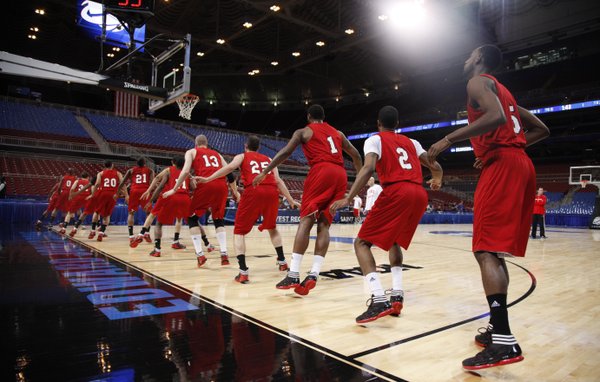 The North Carolina State Wolfpack warm up before practice at the Edward Jones Dome in St. Louis. by Nick Krug

Matt Tait: One of the things that jumped out the most was the incredible size of their backcourt. The Wolfpack's top three guards go 6-5 (sophomore point guard Lorenzo Brown), 6-5 (senior shooting guard C.J. Williams) and 6-6 (junior sharpshooter, Scott Wood). That's incredible. And that's gone a long way toward getting N.C. State to this point in the tournament.

They're a matchup nightmare for most teams — inside and on the perimeter — and they love to use that to their advantage.

Although the Jayhawks aren't quite as tall in the backcourt, Tyshawn Taylor (6-3), Elijah Johnson (6-4) and Conner Teahan (6-5) should be able to hold their own and create some mismatches the other way, as well.

Another thing that was new to me is that N.C. State actually has less depth than Kansas. While the Jayhawks teeter on the border of playing seven or eight guys, the Wolfpack strictly play seven. Fatigue probably won't be a factor in this one, but foul trouble could be. 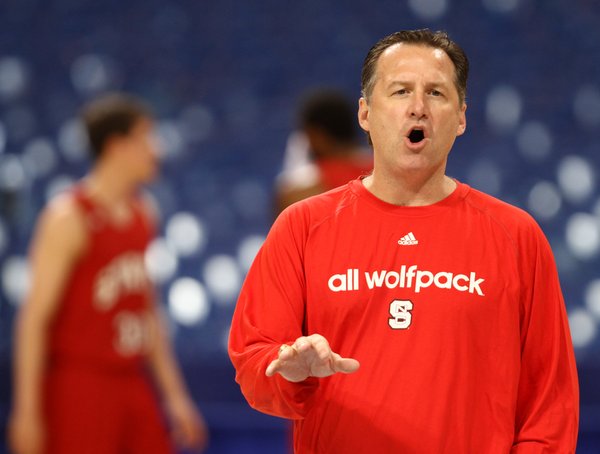 Last game against Georgetown, Wood picked up his second foul with 7:30 left in the first half. Gottfried sat him for three minutes before bringing him back in.

Forward Richard Howell then picked up his second whistle at the 3:35 mark and sat for the rest of the half.

When Brown received his second foul with 1:12 left, Gottfried took him out as well, leaving N.C. State with two guys on the bench with a pair of fouls and one player in the game (Wood) with two.

Definitely keep an eye on the fouls, especially early. Though NCAA Tournament games tend to have fewer fouls, every whistle could be huge for an N.C. State coaching staff that doesn't have much faith in its reserves.

Also, pay close attention to the foul count on Jeff Withey, who is KU's best protector of the rim. If he can stay in, he should play an important role against an N.C. State team that gets 58 percent of its scoring from twos.

Matt, which individual matchup in this game are you most interested to see?

MT: Everyone wants to see the showdown in the post between Thomas Robinson and C.J. Leslie. And I'm in that camp, too. But I think the matchup that will have the biggest impact on this game is the one at point guard between Taylor and Brown. 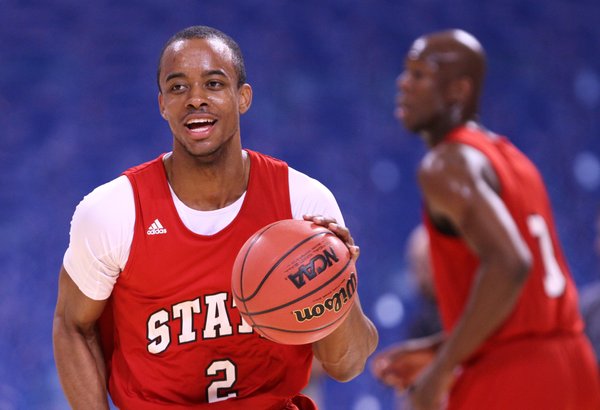 North Carolina State guard Lorenzo Brown runs up the court during a drill on a day of press conferences and practices at the Edward Jones Dome in St. Louis. by Nick Krug

Both are long, athletic guards who can drive and pull up and shoot and both are critical in their team's offensive flow and rhythm. I like Tyshawn's experience here to give him the nod, but it won't be because Brown backs down.

JN: Because of his combination of size and quickness, Brown is a player who's able to impact the game in a lot of ways.

He averages 1.8 steals, which is the best mark for a Wolfpack player in the last nine years, while his ability to penetrate and kick also has helped him average 6.4 assists, second in the ACC only to North Carolina's Kendall Marshall.

The sophomore Brown — who was ranked Rivals.com's 37th-best player in the class of 2010 — also makes 54 percent of his two-pointers and, at 6 foot 5, pulls down a high number of defensive rebounds for a point guard.

Taylor doesn't often play against guards with both the size and speed that he has himself, but Brown is one of those players whose athleticism should be on the same level as the KU senior. 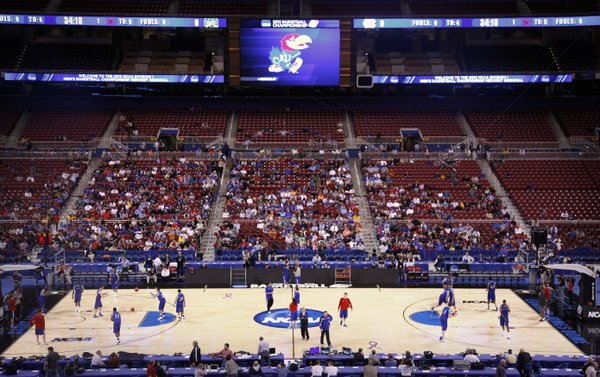 The Jayhawks take the court during a day of press conferences and practices at the Edward Jones Dome in St. Louis. by Nick Krug

MT: I like Kansas in this one and I like the Jayhawks for two reasons. First, I think KU has more experience in big-time, pressure-packed games and that should go a long way in this one. Beyond that, I think KU's players, though similar to N.C. State's, are just a little more talented. If both sides are on, KU's talent and experience should win out.

The other reason I like KU Friday night is because of head coach Bill Self's unreal track record in the tournament when given time to prepare for an opponent. Anyone remember his matchup with UAB in the Sweet 16 a few years back? Or how about last year's Sweet 16 showdown with Richmond? 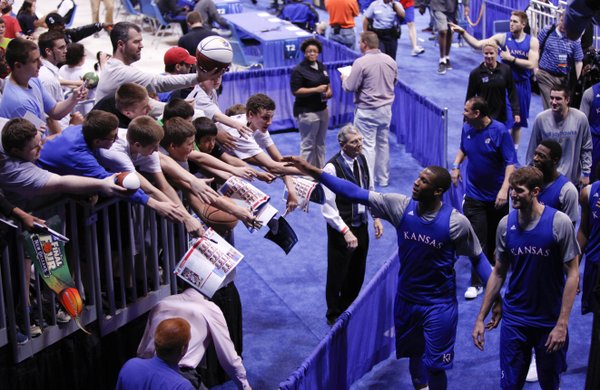 N.C. State plays an up-tempo pace while defending the interior well and trying to get most of its points inside.

In other words, the Wolfpack play the exact same style as the Jayhawks ... only not quite as well.

Unlike the matchup against Purdue, KU should be able to play to its strengths against N.C. State, and I think the Jayhawks' interior defense will be a big key. Early in the N.C. State's game against Georgetown, the Wolfpack players continued to attack the lane, even if their shots were getting blocked.

With Withey providing an obstacle underneath and Thomas Robinson limiting offensive rebounds, I see N.C. State struggling to score, making me think the Jayhawks should advance to the Elite Eight with a double-digit victory.

MT: I think it's a huge advantage for KU that the Jayhawks will be able to return to a more traditional style in this one, where Withey and Robinson can play a little more straight up. And I expect both to have solid games. But I think it's time for Tyshawn Taylor to have his "Wow" game of this NCAA Tournament. 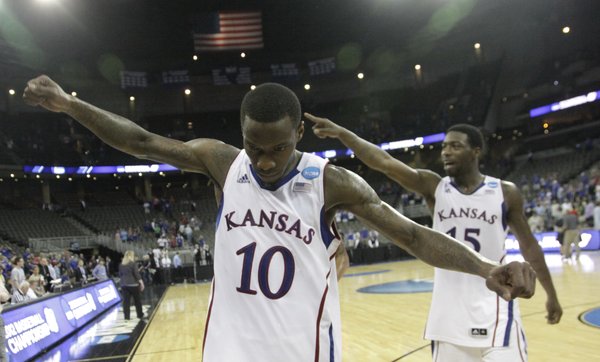 Tyshawn Taylor (10) and Elijah Johnson (15) walk off the court and acknowledge the crowd after KUÕs 63-60 win over the Purdue Boilermakers. KU will advance to the Sweet Sixteen game against North Carolina State, Friday, March 23, in St. Louis. by Mike Yoder

He was OK against Detroit and then missed the second half because of cramping. He never got going against Purdue and struggled with foul trouble as well. Tyshawn's usually at his best when he's facing a big-time challenge. Brown will provide that for him on an individual level and the stage will do it for him on a grander scale. 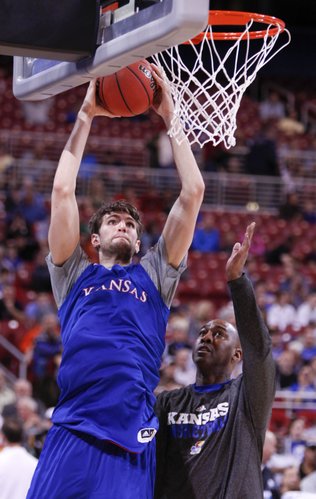 Kansas center Jeff Withey elevates for a dunk during drills with assistant coach Danny Manning at the Edward Jones Dome in St. Louis. by Nick Krug

Here's a quote from Gottfried during his time at the podium Thursday:

"When you look at Withey, and you look at our league, take a guy like John Henson at North Carolina. Withey has more blocked shots than Henson. That jumps out at our guys real quick, because they have great respect for North Carolina's front line."

Withey, who played just 15 minutes against Purdue because of a bad matchup, has the potential to single-handedly throw off N.C. State's entire offensive gameplan.

If Withey was on the Wolfpack players' minds Thursday, just imagine what might happen if he blocks a couple shots early Friday. Much of N.C. State's success offensively has come from being fearless and relentlessly attacking the rim, and if Withey's presence can make NCSU players think twice about inside shots, then he could have a huge impact even if he does nothing on the offensive end.

Give me a handful of blocks for Withey, who should make up for lost minutes Friday if he's able to avoid foul trouble.

Sounds logical to me that Withey will be the HTR, as long as he keeps out of foul trouble. Let Jeff block the shots, and let TRob grab all the loose balls in the paint. TT and EJ force the issue, and wear out N C State's thin ranks by driving the middle and getting their guards in foul trouble. Travis shuts down their best outside threat. KU's short bench will give ample rest to the starters, while N C State's starting five get worn down because of their even shorter bench.

Time to separate the men from the boys.

Will this be Withey's triple double? He has been going to get that all year long. This might be the night.

Stay out of foul trouble, Jayhawks.

Its time for TT to really step up like he did in the conference. This tournament is all about great guard play and hitting outside shots. If The Prophet and TT are on, we will be really hard for NCSU to beat. Teams very rarely beat us at our own game. I think we would have to lay an ugly egg tonight for that to happen.

Gotta hope that our bench steps up to give starters ample rest, no Jayhawk playing over 30 minutes. I see Elijah pouring in another 15+ points and Jeff recording 5+ blocks. Thomas will get another double double, and Tyshawn will log more assists than turnovers. If speed is the way the Wolfpack wishes to play tonight's game, then Kevin should answer the call for substantial minutes. Rock Chalk!

If Withey and TRob can get their bigs in foul trouble early it might force NC State into a zone which would cancel out their athleticism a bit. It will give Tyshawn the ability to dive and dish and with the way EJ has been shooting and with Connor always a threat, NC State would have to pick the better of two evils which would be play big guys with foul trouble or stay in a zone and hope KU doesn't pick it apart like we did to Baylor's zone in the regular season.

This game (like every important game) makes me nervous.

However, I like that they are more traditional, we've struggled with the teams that go small against us. It'll be interesting to see how we do against a team that except at one position is taller than us.

Scott Wood makes me nervous, more than 41% shooting from the 3 and 90% from the FT line means if he is on, we will have to adjust. If he is off, I think KU will run away.

They appear to have better rebounding and assists than we do, so we will need to shoot better than they do. I'm hoping that they aren't able to double/triple TRob quite so much.

I think the difference will be interior defense and KU will go on a couple of runs that will hurt NC State.

I'm thinking that Cinderella's evening is about over; the glass slippers are going to crack, the fancy riding coach will turn into a pumpkin and the Handsome Prince transforms into Andy Dick!!!!!

Kansas by 13 and it won't really be that close.

This is posted on other forums, but thought I would share. Great video of Tyshawn and proud to say he is a Jayhawk.

More Than a Number: Tyshawn Taylor

sweet video, thx for sharing. i hadn't seen that yet.

Story on TRob on CNN

You know, I just tried to have an educated conversation with a KSUCK fan who was bent out of shape that TT got added to the Cousy list. And that McGruder was a better player. LORD! It's like a monkey #%@*@ a football.