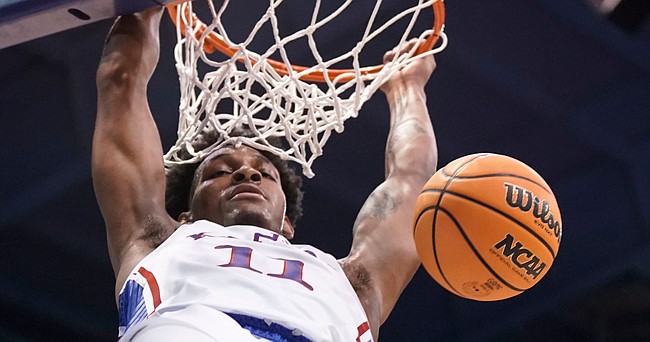 Each time, Rice has shown the full gamut of what he’s capable of doing.

Now, he needs to find a way to do more of it more often.

“With his size, his strength, his ability to shoot the ball, now that he’s finally getting a chance to play and get into his rhythm you see how successful he is on the offensive end,” KU junior Jalen Wilson said of the five-star freshman after Monday’s 87-55 win over Texas Southern. “When he plays like that, that’s what we need, a guy that can come in and do that, and he has the ability to do that every single night.”

Already offensively gifted enough to impact the game in a significant way, Rice showcased every bit of his offensive ability in Monday’s win at Allen Fieldhouse. He scored a career-high 19 points and needed just 22 minutes to do it. 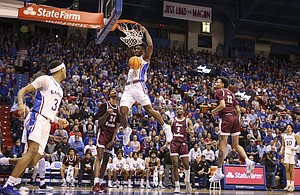 View a photo gallery from Monday night's game between the Kansas Jayhawks and Texas Southern Tigers at Allen Fieldhouse.

In making six shots in nine attempts, including two from 3-point range and two vicious dunks, Rice did on game night what his teammates had seen him do so many times before — lit up the scoreboard.

Most of that, however, came during the summer and preseason, with Rice suffering a series of injuries that kept him out of practice and even a few games starting in October.

First was a back injury that forced him to miss eight straight practices and the season opener. Then came a bout with COVID-19, followed quickly by kidney stones so intense that he wound up in the emergency room.

Despite the setbacks, Rice has stayed ready and done his best to learn from the sideline.

“It’s a process,” he said after Monday’s win. “Whether I like it or not, it’s a process. Where I’m trying to go, I’ve got to be mentally strong, so it’s just preparing me.”

Kansas coach Bill Self has long been a fan of Rice’s potential on the offensive end. He likes his shot-making ability. He likes his toughness. He likes that he can score at all three levels. And he likes that his confidence makes him a nightmare matchup when he’s really clicking.

On Monday, Rice showcased what Self called “bully ball,” in which he took advantage of his physical strength to get to the rim. 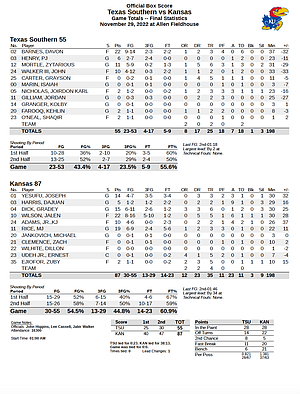 Self added that it was good for Rice to see “the ball go in” during Monday’s victory, but he noted that the 19 points Rice scored against the Tigers might not come as easily from here on out.

Against those two teams at last week’s Battle 4 Atlantis tournament, Rice played just 16 minutes total and scored two points on 1-of-5 shooting. Most of that came against Tennessee when the game had already long been decided, and Self and the rest of the Jayhawks are hopeful that Monday’s showing represents the start of some consistent minutes and good health for Rice.

“Texas Southern is going to be good in their league,” Self said Monday. “But that’s not exactly Wisconsin or Tennessee guarding us out there from a physicality standpoint.”

Rice’s chance at an encore performance will come Thursday night, when the 9th-ranked Jayhawks (7-1) welcome Seton Hall to town for an 8 p.m. tipoff in the Big 12/Big East Battle.

The game will be televised on ESPN.

KU coach Bill Self after the Jayhawks’ 87-55 win over Texas Southern by KUsports.com

"a long ways to go" defensively: that's a cue for Rice. Coach won't start him until he sees Rice busts his butt off on defense. Fundamentally, IMHO he's ready, he just needs to adapt to the switching part, and most importantly boxing out & get those D rebounds. Let's see how he performs against more pressing, athletic opponents.

Garrett is the classic example of the kid that came in prepared on the defensive end, and appreciated/played by Coach Self while being maligned from armchairs throughout the nation for a lack of O development. Often it isn’t even a matter of effort, busting butt. In the common phrase from the ’22 championship run, it is knowing and executing “all the little things” that Coach teaches, demands, that most of us never see.

This might be one of the rare KU teams that needs his O output as much as his D development. Gotta find at least one more consistent scorer behind Jalen and Gradey. Elite D’s will readily eliminate one scorer, and one more isn’t enough.