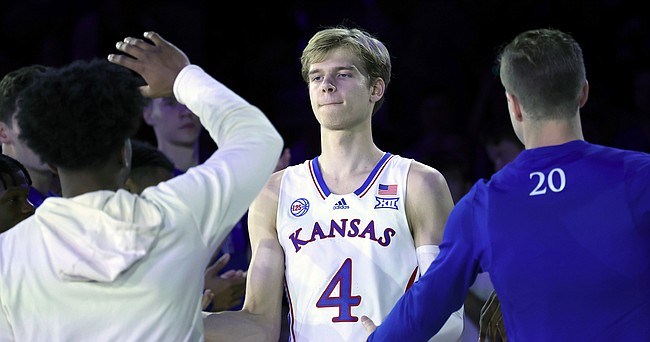 It’s not common for Kansas basketball coach Bill Self to hop out of bed for a 7 a.m. wake-up call the way he did on Wednesday, just a few hours before his team’s 80-74 win over North Carolina State in the opening round of the Battle 4 Atlantis tournament in the Bahamas.

And the reason for Self’s rise-and-shine mindset was simple. It had been three weeks since he had been on the sideline coaching his team in an actual game. And even that one — an exhibition victory over Pitt State in early November — did not really count. 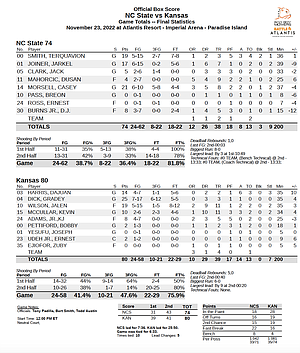 Wednesday’s did, though, and it moved the third-ranked Jayhawks (5-0) into the tournament’s semifinals, where they will face Wisconsin (4-0) at 10 a.m. Thursday. The Badgers defeated Dayton, 43-42, in the second game of the day in the Bahamas.

“I usually don’t jump out of bed (that early),” Self said after KU’s win. “But I kind of did today because I was excited about what was getting ready to happen.”

That early-morning excitement paled in comparison to how high Self jumped a few hours later, after watching freshman guard Gradey Dick hit six of nine 3-pointers during Wednesday’s first half to help lead the Jayhawks to victory.

“Whew, he was good the first half,” Self said of Dick, whose 92 points through five games are the most by a Kansas freshman in 25 years. “He’s a terrific shooter.”

As such, it has not been uncommon for Dick to get red hot from 3-point range and put on a show for entire gyms throughout his basketball playing life. He once made 10 3-pointers in a game during his prep days at Sunrise Christian Academy back in Wichita. And his open-gym shooting sessions with teammates and trainers routinely featured ridiculous stretches of long distance makes.

Never before had it been quite like this, though. And even that did not impress the five-star freshman, who was pretty matter-of-fact about his contribution on Wednesday after scoring a career-high 25 points on 7-of-17 shooting, including 6-of-12 from 3-point range.

“Once I saw the first one go in, I just started getting them up and my boys were finding me and I was just playing my game,” said Dick, who last week was named the Big 12 newcomer of the week. 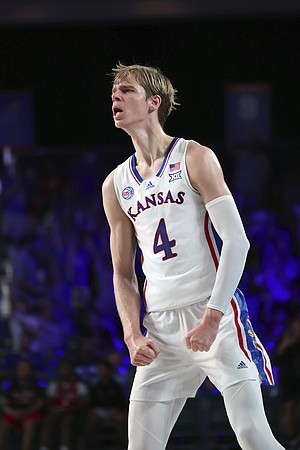 If that is, in fact, his game, this is going to be a wild season for the KU record keepers. His six first-half 3-pointers on Wednesday were the most 3s by a KU player in a single half since J.R. Giddens hit seven in 2004. Jeff Boschee also hit seven in a half four years earlier. And in the 1990s, KU sharpshooters Terry Brown and Billy Thomas each made six in a half like Dick did on Wednesday.

“It was terrific,” said KU junior Jalen Wilson of Dick’s performance. “He played great. We needed that and we look for him to do things like that. He’s a sharpshooter that has no conscience, man. We want him to shoot the 3 every single time if he can.”

Wilson, KU’s leading scorer, was also good again. He struggled with his shot like he did in the Champions Classic win over Duke, but figured out the best way to remedy that was to pass up the outside shots and attack downhill. Once he did, NC State had no answer.

“He really struggled offensively today,” Self said of Wilson. “And he still gets 19 (points) and 11 (rebounds).”

The Wolfpack (4-1) paid much more attention to Dick behind the 3-point line in the second half, limiting him to just three 3-point attempts (all misses) in the final 20 minutes.

Even that didn’t always work out in their favor. On one attempt midway through the second half, Dick was fouled by one of three players who contested his top-of-the-key 3 and that led to three free throws and pushed KU’s lead to 58-49 with 11:14 to play. That was KU’s largest lead to that point.

“We played him too many minutes I think because I think his legs left him a little bit,” Self said of Dick. “He really didn’t do much the second half. But he made a great cut and made his free throws. It is nice when No. 4 shoots them. You kind of take that for granted sometimes. When he goes to shoot three, you just think he’s going to make three. That obviously helped us.”

In addition to his scorching performance from behind the 3-point line, Dick finished the day 5-of-5 at the free throw line, which led the way for the Jayhawks’ 22-of-29 team showing at the charity line. Wilson made eight of 12 at the free throw line and Dajuan Harris Jr. hit five of six while Kevin McCullar Jr. made four of six.

In all, 76 of KU’s 80 points came from its starting five, with just Bobby Pettiford and Ernest Udeh scoring off the bench for the Jayhawks.

Despite being available, freshman guard MJ Rice and sophomore forward Zach Clemence did not play in Wednesday’s game. Clemence is still dealing with the effects of being hit in the late in KU’s home win over North Dakota State a couple of weeks ago and Rice has recently battled both COVID and kidney stones.

“That wasn’t the game (to bring them back),” Self said. “I didn’t feel it. It’s not a knock to them. They didn’t practice and they understand. They totally get it.”

Behind Dick’s first-half shooting performance, Kansas led 39-31 at half. That lead quickly disappeared, though, when NC State opened the second half with an 8-0 run. The Wolfpack, with their speedy pace and 3-point attack, continued to make charge after charge at the Jayhawks. But Kansas had an answer each time.

The Jayhawks closed the first half on a 14-6 run and answered NC State tying the game at 63 late with a 17-8 run to slam the door.

“I think it really just showed what our team’s about,” Dick said. “In crunch time, we can come out with tough plays when we really need it and we’ve got the guys who step up to do that.”

As for Self’s return, along with that of assistant coach Kurtis Townsend, the Kansas players were nearly as energized to have him back on the bench as he was to be there.

“It’s great to have him and I’m glad he’s back now,” said Wilson, noting Self’s leadership and encouragement as the biggest additions to the bench.

KU's Bill Self on returning to the bench, Gradey Dick's big day & more after 80-74 win over NC State by KUsports.com

KU's Gradey Dick and Jalen Wilson after knocking off NC State in the Bahamas by KUsports.com

Jayhawks have a way to go to be elite. Their inside game was mediocre. The lobs to the “bigs” is not working. NC State’s guard were by far the quickest players on the court. KU could not stop them from penetrating the lane. And the lack of KU’s bench points should be a point of concern. Wisconsin looked offensively challenged against Dayton (still the loudest fan base) but played strong team defense. Hopefully Self will be able to spread the minutes a bit more. Rock Chalk.

I'm glad I'm not the only one, Andy.. I hope coaching staff address this 'lobs to the bigs' concern soon.

1] It was great to see how Grady "dicktated" the pace of the game in the first half.

2] He could be called "The Dicktator of the three!!"

3] When he shoots, his shots fall no matter whether he is either north or south of the Mason-Dickson line.

4] His play will scare the Dickens out of our opponents.

Great 3pt showdown! Great win against another well coached opponent. Dick continues to impress us. Most points by KU freshman in the first XX games... keep going and going.

Any rooms to improve? Heck yeah. We now rely too much on 3s, while our bigs only got 2-3 touches. Coaching staff should be reminded with how many missed lobs this team has. None of those lobs today was successful. Neither was the previous game's. Illegal screen is still problematic. Jalen's turnover again and again, by passing the ball in desperate moment without full awareness of his team. That's weaving offense against good man-to-man D. How about focusing more on boxing out on D? We've given double figs OR to opponents 3 straight games.

Let's roll out some Dok's tapes, coach! We need to feed those hungry bigs, too! ROCK CHALK!

During KU's first game this season the commentators doing the game compared Gradey Dicks shot to Christian Braun ........................that they were great shooters, Dick is far and away a better shooter so there no comparison. We do need to develop our big men although Adams is developing on the inside he at times overmatched because of his size .....Whats going on with Zach and is Rice still hobbled . After back to back losses to Baylor and TCU last year there were alot of fans hitting the panic button but things worked out all right.Its early yet with a few new faces,so Coach Self with twist and tweek the lineup and rotation ,but Im not worried about this collection of players .........RCJH

I’m just glad Andy and Steve have it all figured out. Coach ‘em up, fellas!!!