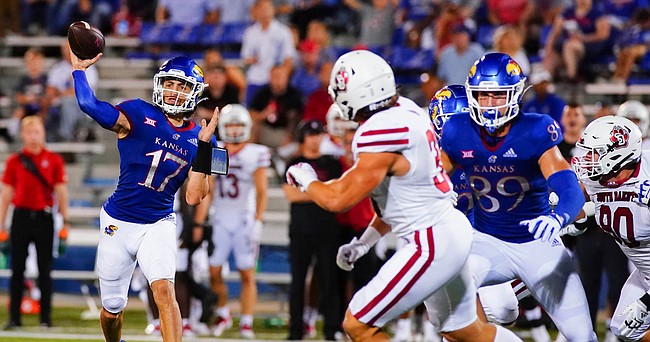 Before the competition completed, Bean recently shared his perspective on what he showed during August practices that could help him win the job.

“I think obviously my legs, being able to get out of the pocket and run, and some of the run game stuff. I think that’s been the main thing,” Bean said. “But also just being able to throw the ball just as well, too.”

Bean gave UNT a rushing element as a QB last year, averaging 6.2 yards per carry and running for five touchdowns. He started in seven of North Texas’ 10 games as a redshirt sophomore before deciding to move on from the Conference USA program.

The QB from Mansfield, Texas, said during his most recent interview session in mid-August that he was hopeful the Jayhawks would have a clear No. 1 QB entering the season.

Leipold said during his weekly press conference on Monday he felt satisfied with how the competition was working itself out.

“I really tried to come in with clearly an open mind of what to expect. I’ve kind of gone through these before,” Leipold said. “There’s so much to look at, that we talk about as a staff.”

The newest QB on the roster — Bean joined the program early this summer — credited Kendrick and Daniels for helping him elevate his play during the preseason.

Familiar with QB battles before he arrived in Lawrence, Bean was involved with a competition at North Texas throughout much of what would be his final season with that program. He finished 2020 with a 54.5% completion percentage, and threw for 1,131 yards and 14 touchdowns in eight appearances. Bean went 79-for-145 through the air, with five interceptions.

This past December with the Mean Green, Bean turned in two of the better statistical games of his career. He went 17-for-30 passing in a loss to Louisiana Tech, throwing for 231 yards, with three TDs and one interception. In his final game in a UNT uniform, Bean finished 21-for-36 through the air, for 251 yards, two TDs and an interception in a bowl loss to Appalachian State.

Thank you for not stringing us along any longer. Rock Chalk!

As predicted in an early article.

"I would select the quarterback who has demonstrated the ability to lead a team to a win. I am not as big on individual stats as much as if they can lead a team to victory. The Mean Green were 4-6 last year and Bean started 7 games (not easy to find out how many wins for which he was the starting QB but I believe he was the starter for 3 wins and 4 losses in 2020 - not great against lesser competition). However, between Daniels and Kendrick combined they led KU to a record of 0 wins and 9 losses. Matt, how many wins has Kendrick been a part of as a starter for KU - ("saw action" in 4 games in 2018 before taking a redshirt)? So based on my metrics from these three QBs, Bean has the upper hand."

I don't think it's fair to judge ANY QB on how they did last year. I don't think even Tom Brady could have had success with that sieve of an offensive line.

He will do great.

I think because of his legs - - -speed , IF the O-Line can sustain a block hold a block/protect because of Jason legs it's going to make defense respect his duo ability. Not a type of QB where they can just ping their ears back and full out blitz stack the line all the time - -if he can complete some passes early make them respect the Pass as well as the run.

I think we have solid running backs to run the ball well - -Again is the O-Line can maintain a block. I think we just might surprise be entertaining this season. Rock Chalk All day long Baby

Being able to run is a bonus at QB. Hopefully this means he’s improved his accuracy to at least 60%. Tough to win games when a pass/3rd down conversion is little more than a coin flip.

Getting read to stream the game, excited to see the start of the turnaround.