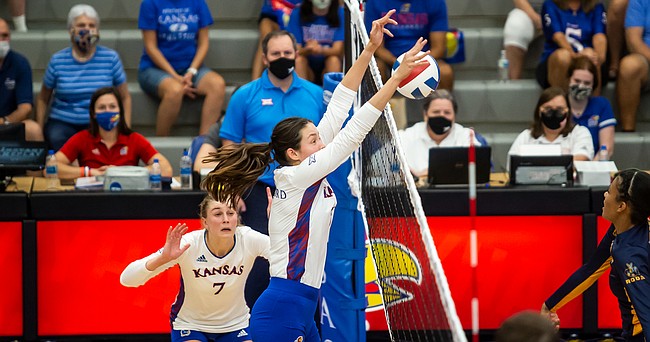 Sophomore middle blocker Caroline Crawford was named the Big 12 Defensive Player of the Week on Tuesday following the Jayhawks weekend series against Oklahoma.

The honors marks the fifth career Big 12 weekly award earned by Crawford. She was a three-time Big 12 Rookie of the Week last season and she also has earned two defensive player of the week honors.

A native of Lansing, Crawford had two of her best all-around matches last weekend as Kansas hosted Oklahoma. In the opener, she helped KU set a new single-season school record with 24 blocks and led the team with nine blocks of her own, including one solo and eight assists. The 24 blocks were also the most in a Big 12 match this season and tied for the highest mark in an NCAA Division I volleyball match this year.

Crawford followed up the record-setting night with a career-high 10 blocks (three solo, seven assist) in a four-set win over the Sooners the next day.

For the week, Crawford averaged 2.1 blocks per set. She was also effective offensively with 23 kills while hitting .255 over nine sets played. She becomes the second Jayhawk to earn a Big 12 weekly award this season, joining two-time rookie of the week Caroline Bien.

The Jayhawks (12-9 overall, 4-6 Big 12 play) return to action Thursday and Friday at West Virginia. Both matches will be broadcast by ESPNU.