The eight selections on the men’s side were the most for Kansas in the 25-year history of the conference, surpassing the previous high of five academic all-conference performers set in both 1997 and 2006.

Agbaji and McCormack landed on the Big 12’s Academic first team for the second consecutive year. 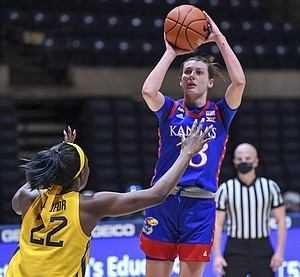 Kansas guard Holly Kersgieter rises up for a shot attempt versus WVU on Feb. 10, 2021, at WVU Coliseum.

A total of 48 student-athletes (38 first team and 10 second team) were selected to the 2021 Academic all-Big 12 women’s basketball team, and the men’s team included 58 players, 42 first-team honorees and 16 second teamers.

First-team members have maintained a grade-point average or 3.20 or better, while second-team honorees hold a GPA between 3.0 to 3.19 GPA.

To qualify for either team, student-athletes must maintain a 3.0 GPA or higher either cumulative or the two previous semesters and must have participated in 20 percent of their team’s scheduled contests. Freshmen and transfers are not eligible in their first year of academic residence.

The KU men’s program has produced a league-best 70 Academic all-Big 12 honorees since the inception of the conference in 1996-97. Texas is second with 67, followed by Iowa State (57), Texas Tech (57) and Oklahoma (56). KU has 51 Academic all-Big 12 First Team honorees and 19 second-team selections. In the Bill Self era, Kansas has had 49 student-athletes named Academic all-Big 12, including 35 Jayhawks on the first team.

“Communication Studies”??? “Liberal Arts”??? Communication number one is the degrees they are getting or not worth the paper they’re printed on. What about degrees like math or engineering or chemistry or accounting or physics or computer programming? Even a business degree is of marginal value at best. What a joke.

Lol. You still think college degrees matter. Good for them for juggling studies and sports no matter the degree.