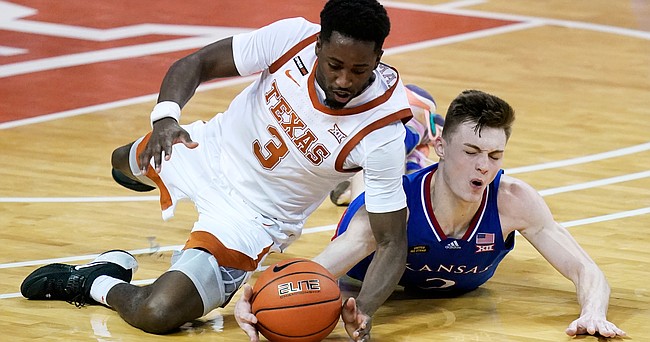 UPDATE: Shortly after this was released, KU announced that it has withdrawn from the Big 12 tournament after a positive COVID-19 test within the Kansas program. Stay in touch with KUsports.com for more updates.

This matchup, particularly without David McCormack, is going to be a major challenge for the Jayhawks.

But they have proven — as they did on Thursday night in their quarterfinal win over Oklahoma — that they can be effective and tough to handle while playing small.

Kansas coach Bill Self said he likely would start big to try to match some of Texas’ size, but even as well as he played on Thursday, Mitch Lightfoot will have a hard time slowing down UT bigs Jericho Sims, Kai Jones and Greg Brown.

So maybe instead of trying to stop them, the Jayhawks simply flip the script and force Texas to try to matchup with them.

Remember those Missouri games a bunch of years ago when Jeff Withey couldn’t even play because of the lineups the Tigers used? It’s kind of like that.

Jalen Wilson, Ochai Agbaji, Christian Braun and Marcus Garrett will have to be big on the boards (on both ends) for the playing small strategy to work. But that really just comes down to fundamentals. It’s box out, get the guy on your back and make him go over your back if he wants the ball.

It won’t work every time, of course, but neither will trying to play UT straight up.

Self flashed a few possessions of zone at Texas in the overtime loss last month and it flustered the Longhorns momentarily. Once UT solved it, though, Kansas never went back to it.

As everyone knows, Self’s not one who likes to play zone, not necessarily because he hates the defense, but mostly because they just don’t work on it that much.

KU might need to play a little more of it tonight, though.

One of the easiest ways to keep the Texas big men from dominating the game down low is by keeping the floor spread and the ball out of the paint.

Ball movement — hello, Dajuan Harris (more on that in a minute) — and the willingness of all of KU’s perimeter players to pull the trigger when given even the slightest bit of room will be a key factor.

Agbaji showed he was willing last night. And Garrett did, too. Wilson’s never been gun shy. And Braun and Bryce Thompson need to be ready to shoot, too.

KU was much better offensively against the Longhorns in Austin than they were at Allen Fieldhouse. But not having McCormack to play through, which loosens things up, will be a major challenge.

Recent history has shown that if a game is played in the 60s or lower, Kansas’ chances of winning go up considerably.

That will be tough to do against a Texas team that hung 84 on the Jayhawks in Lawrence and can shoot the heck out of it from all over the floor. But KU did keep the Longhorns to 75 in Austin and Shaka Smart’s team needed overtime to get there.

So clearly KU is trending in the right direction, both overall, with its improved defense, and in the head-to-head matchup with Texas.

The Jayhawks were terrific defensively in the first half against Oklahoma on Thursday night, holding the Sooners to 15 points and 30% shooting. But their ability to play small and switch defensive assignments on the fly at all five spots played a huge role in that.

They won’t have the same luxury against the bigger Longhorns, so guarding your man and taking pride in team defense will be key elements of KU’s hopes of advancing to Saturday’s title game.

Since giving up 91 points to West Virginia in a road loss in early February, KU has held eight of its last nine opponents to 66 points or fewer, with the one exception being the Longhorns.

There were points during Thursday’s 67-66 win over Texas Tech when UT point guard Matt Coleman dominated.

He’s shifty, lightning quick and can score inside and from the perimeter. And he’s been known to have some success against the Jayhawks.

Harris is a great matchup for KU against Coleman and he should have the confidence he needs to line up and compete with him.

It won’t be Harris on Coleman for 40 minutes, of course. Others will have to take their turn, too.

But whether Harris plays 15, 20, 25 minutes or more, he’ll need to be the pest he’s been in recent weeks to make Coleman a little more uncomfortable and help take some of the flow out of the UT offense.

When KU’s on offense, Harris just has to do what he’s been doing — move the ball, attack when the opportunity presents itself and find KU’s shooters with sharp, decisive passes.

Harris appears to be on the brink of a major breakthrough and he’ll face one of his toughest challenges yet in a high stakes game tonight, when he could be a major factor.

It’s no secret that Texas has an opportunity to do something that’s never been done during Bill Self’s time at Kansas — beat KU three times in the same season.

UT became just the second team to sweep a regular season home-and-home series with the Jayhawks in the Self era a few weeks ago with an overtime victory in Austin. In early January, Texas rocked Kansas by 25 at Allen Fieldhouse.

So clearly this is a tough matchup for the Jayhawks. But KU was much better in the rematch, both in terms of impacting the game with their style of play and in terms of competing harder than they did in Lawrence.

Texas noticed and had to play great down the stretch to survive.

The only other team to get a crack at beating a Self-led Kansas team was Oklahoma State in 2018. The Cowboys swept the home-and-home series with Kansas (becoming the first team to do it) and then lost to KU in the quarterfinals of the Big 12 tournament, which springboarded Kansas to a run to the Final Four.

Oddsmakers in Las Vegas listed the game as a pick ‘em to open but Texas has since become a 1.5-point favorite in the eyes of bettors.

The winner of this one earns a spot in Saturday’s Big 12 title game (5 p.m.), where they’ll meet the winner of the other semifinal matchup between No. 2 Baylor and No. 12 Oklahoma State at 5:30 p.m.

No team has ever beaten Kansas three times in a season while Bill Self has been our coach. Let's keep it that way.

well... at least that record remains in tact...