Kansas receiver Steven McBride runs through a drill during a spring practice at the Jayhawks' indoor facility on March 30, 2021.

Whether it’s Emmett Jones or someone else leading the Kansas football program when the season begins in September, the Jayhawks will be taking a youthful roster into their 2021 schedule.

Even counting the eight players who used the NCAA’s blanket waiver for an extra year of eligibility, KU will have just 20 seniors on a team brimming with sophomores and freshmen.

As the Jayhawks go through spring practices, the underclassmen easily outnumber the veterans, and the disparity will only grow this summer, when the bulk of KU’s 2021 signing class arrives on campus.

The roster is skewing particularly young because the coaching staff, once Les Miles was hired in late 2018, started putting a genuine emphasis on signing high school players — KU didn’t have any junior college transfers in either their 2020 or 2021 classes. 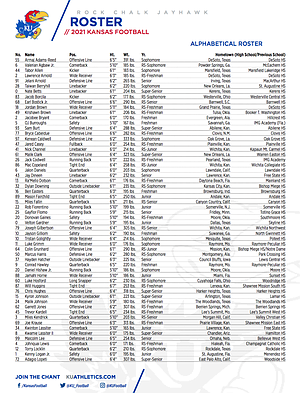 Now the Jayhawks are seeing the results of that shift. They have 24 sophomores on their roster, a whopping 24 redshirt freshmen and once the rest of the freshmen arrive before preseason camp they should have 22 true freshmen, as well (not counting new walk-ons that will be added).

But it would appear Year 1 of the latest version of the KU football rebuild will again involve a heavy reliance on young players.

Plus, the defense has some other sophomores who could play crucial roles in 2021, including Marcus Harris, Da’Jon Terry, Jereme Robinson, Duece Mayberry and Steven Parker.

I am really excited about the direction this football program is headed. Yes, it will be another 2 or 3 years before we see bowl eligibility but we are moving in the right direction and with a really good foundation.

I just hope the decision is to stick with Emmett Jones through this coming season before making a permanent HC decision. Not only does he deserve that opportunity, to put in a new coach with all the expected changes that brings would be so disruptive at this point it would be almost tatamount to 2020 when we had no opportunity at all to get young players up to speed and to install the new offense. Let's be smart and go with Jones.

Or smarter still and hire a permanent coach. Panic is not a good strategy.

Not sure what you mean by permanent coach.

But panicking is not the answer. And to me the first thing Goff should really be doing is talking to the players. Of course he probably won't. But, the program is on the verge of turning a corner and is in a fragile position. In his first two years, Miles had added a bunch of young recruits to Beatty's now Junior Class and Redshirt Sophomores. There is some talent in there. And, this team is growing up and Goff needs to keep the family together, let the group grow and finish together, and fill up KU's scholarships. Hiring in a new coach with a new system and scaring off players that feel they don't fit is not the answer. KU needs at least two years of keeping the recruiting classes together. Otherwise, KU will be back to 60 scholarship players, no different from when Weiss was fired. IMO, give Head Coach Emmett Jones a two year contract. Continue recruiting Freshman and not transfers. Give this group a chance to be sucessful. Get KU back up to 80+ scholarship players

This is a great, young group of talent that needs an experienced head coach and staff to reach its potential.

This is not the time, in my opinion, to give someone a "chance" because it's their turn, or they're a really cool guy. No disrespect to Jones, but KU simply CAN'T screw up again.

IMO, an experienced head coach with only 60 scholarship players is going to LOSE! Maybe we should take a new and refreshing approach. Maybe we should hire someone that players like and want to play for. And, if that is Emmett Jones, then maybe we should listen for once and give him a chance.

I agreed with Dale, and then with Doug. Heart versus Mind.

Panic is not a good strategy.

Hiring a new coach now, massively outside the hiring cycle, simply because the last one left sounds like panic.

Good thing Goff agrees with Brian and has planned to talk with the players and everyone else.