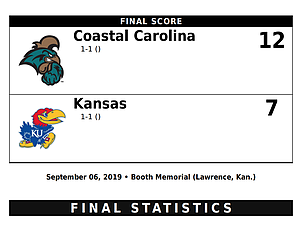 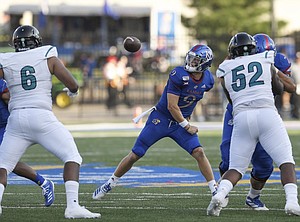 We don't have too many P5 wins ourselves so it stands to reason if you want one we are the team to put on your schedule.

This hurts, KU should be able to beat teams like Coastal Carolina, Nicholls and South Dakota State easily. It hurts seeing a roster lacking any talent. K-State has dominated each of their two opponents, one of which we lost to last year. Both schools are going through a coaching change and both schools failed to make a bowl game last year. What makes it hurt even more is Jax Dineen is in Manhattan and he has been embraced by them and he loves it there. A KU legacy! It hurts to hear his parents talk about what a game day experience they have over there. We will get past this, but that doesn’t mean the expectations weren’t there and that it won’t hurt for a little while longer.

And K-State wasn't that much better than us last season.

I agree with you but want to point out that K-State's opponent, Bowling Green, lost last week to Morgan State, 46-3.

Every single time they cut to Miles he looks confused and faded. When he gives a press conference he comes off like a 3rd grader with a book report. I only followed him a little in his past coaching days, but his clips and quotes were always so animated and full of life. Now its like being on a bad cell phone call with a 3 second delay. Everyone's trying hard to understand everyone else but physically communication is a struggle.

Every aspect of this KU football team has improved, except the offensive line.

Without an O-Line, KU football will continue to be the “power 5 conference” team to beat.

The same personnel on the O-Line looked better under last years coaching staff.

Rewatched the game again today. Stanley had several decision making errors, but the glaring issue is the offensive and defensive lines. Which I have seen stated on these boards in earlier posts. Coastal Carolina was in our backfield pretty much all day and their running back ran for 148 yards. With a trip to BC coming up along with Big 12 play both lines need to improve quickly.