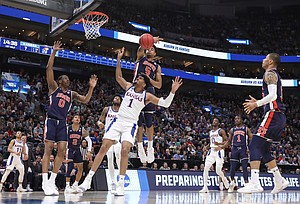 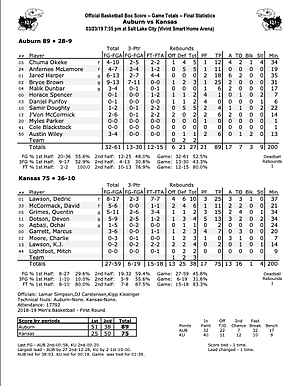 I really liked this group....unfortunately the chemistry never was quite right...The Vick thing...Garrett ..is a good player.... but never knew what he was going to do...Coach knows what we need for next year...we were exposed in many ways...we need speed...we need sharp shooters..we need high energy guys..guys with a motor...and guys that can get up under people on the perimeter...my guess is..we will lose a lot of our guys to professional basketball on all continents from this team...so Coach will again need to reload and next years team will have limited leadership returning....then there is the Question about the recruiting and that whole mess and how that translates to future prospects' living room...etc...we are going to receive some kind of penalty...so what we have seen on the court this year may last for a couple more years.....lets look at the positives...we made the NCAA Tournament...we played in the Big 12 Championship game and we at times played well...on the negative...we were run out of buildings on a few occasions..run over by faster quicker teams.....its the first time in the Self era that has ever happened in my memory...embarrassing to perfectly honest about it.......the guys that are staying..... need to become SERIOUS gym rats.......all day every day..unsupervised ...1000 free throws a day...learn how to play smothering perimeter defense and practice shooting off the dribble...all the fundamentals..etc...learn from the lessons this season illuminated.....Enjoyed watching this group and look forward to next year!

Self can devise great quick hitting plays, for example in-bounding plays, but he leaves much to his players to decide what to do in half court offense. Roy by contrast always seemed to have brilliant offensive plays - but everyone knew them by the end of the year. It seemed to me that this year, because of our youth, Self should have provided more designed plays and left less decision making up to the players - especially during the tourney. They just looked so lost at times.

Good points Brad. For many schools this year would be fantastic. Our bar is much higher and it should be. Recruiting, and player development needs to be reviewed. Our 3pt shooting has to improve. If any recruits out there can really shoot 3, then big playing time is available.

Right now, except for Azubuike (I don't think Lawson comes back) we have no real offensive threat. Dotson is not a good enough 3pt shooter to really worry teams. He is good, make no mistake, but greatness means developing his game to really include the 3. If he does look out.

Grimes, improved greatly in terms to taking the ball to the hoop against size, but he needs to hone the mid and short range jump shot. His 3 has to be there consistently.

McCormack showed a lot at end of season. He is still a little rough on the edges, but he can definitely play. We need to figure out how to play 2 big men against 4 guard offenses. We struggled with that this year.

There is room for improvement and that is an understatement. Just getting a year older is not gonna cut it.

I'm not that disappointed. It's disappointing when you don't live up to your expectations but the ceiling on this team was not very high to begin with.

Not high to begin with? We were ranked #1 in the preseason poll. The loss of the 3 players doomed us in the end.

Imagine how good the Big 12 is gonna be next year. I think it will be loaded top to bottom. WVU will be good, OSU will be good, OU will be good and that's this years bottom feeders. ISU, TTU, BU all have a lot of talent returning as well. Even Texas will be better next year. KSU will be ok, not great but they'll compete and of course TCU as well. My point is I think we'll all make a statement next year. KU's kids will be bigger, stronger and more experienced and we have a shot at redeeming ourselves not only in the league next year but HOPEFULLY the tourney, depending on NCAA.

PLEASE! Can we stop talking about how good the BIG12 is? Seemingly every year, we win (as a conference) and we certainly weren't ducking any proposed match.

BUT 1 National Championship in the history of BIG12 basketball? PAC12 has FIFTEEN! ACC 14, SEC 11, Big10 10, Big East 8. I didn't count Independents or mid-majors that have also won more.

THE WORST MAJOR CONFERENCE IN COLLEGE BASKETBALL IS THE BIG12!

KU needs to recruit shooters, power forwards, athletics, winners because we have very few on this team. I dread next year with the talent on this team even if they all come back. Garrett, Moore, Lightfoot, Grimes cannot shoot. We desperately need a great point guard. We need the old KU toughness back as we were far too soft this year. Coach needs to get better also. The rest of the league has caught up and a few has passed him.

One down year and you're trashing on Coach's ability. Classy!

Dotson will be a great point guard.

Remember when the Jayhawks played great defense? Let’s get back to that.

Is Self going to be the one who brings home another NCAA title or is his replacement learning the game?

Okay, just possibilities on something that will hopefully never happen.

And one more that's probably not so well-known: