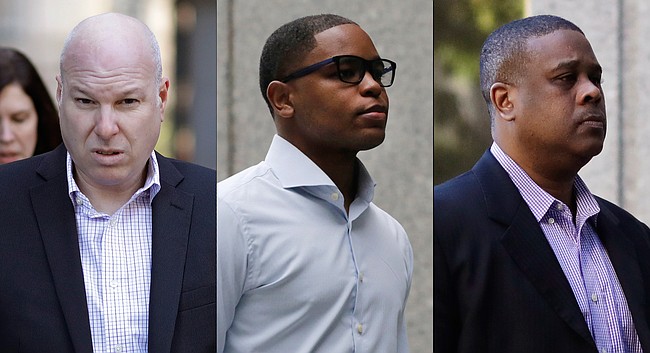 Attorneys for the three men filed separate court documents on Tuesday that requested they receive probation sentences rather than jail time. In all three filings, attorneys for the men argued they deserve mercy and leniency from the court, noting they did not intend to harm the universities but help them.

“Indeed, the government has never been able to show that Mr. Gatto sought to inflict pecuniary harm upon the universities,” Gatto’s attorneys wrote in his filing. “To the contrary, helping the Universities recruit successful basketball teams — which even the government's cooperating witnesses agree was the purpose of the alleged scheme — was understood by the scheme participants as one that could help the universities bring in tens of millions of dollars in annual revenue.”

The three men are scheduled to be sentenced on March 5, according to the filings.

During the trial, testimony focused on KU coach Bill Self’s relationship with government witness T.J. Gassnola. The former Adidas consultant testified that he paid the families of players to steer them to KU, including $90,000 to the mother of Billy Preston and $2,500 to the guardian of Silvio De Sousa. Gassnola testified that he never told Self about the payments. Gassnola is awaiting sentencing in a separate but related federal case.

The defense in the case argued that the coaches, including Self and KU assistant coach Kurtis Townsend, were aware of the payments to players. Despite the argument, the jury found all three men guilty of defrauding universities, including KU, by providing money to players’ families to steer them toward certain programs.

Additionally, because of Gassnola's actions revealed in the trial, the NCAA announced earlier this month that De Sousa is ineligible to play for KU until the 2020-21 season. KU has said it is appealing that NCAA ruling.

Of course the defense lawyers are going to request this. But the trial already concluded that these guys were found guilty of defrauding universities. That was the basis of this entire thing and is the reason the FBI was involved.

I doubt the judge would now agree with the defense.

I think you are forgetting that the Townsend text messages were NOT allowed in court... as KU was not on trial. Hence, KU’s culpability and knowledge of events was not fully argued.

Gatto , etc. should be ashamed of themselves for preying on poor, defenseless universities. Life in prison without parole would be appropriate. My heart aches for these universities who were so cruelly victimized by these scoundrels. Just pulling your leg a bit.

The University only loses if the NCAA asses some penalty. Lets hope that does not happen. I guess it has with respect to Silvio. And I guess we also did lose out on Preston playing, so I suppose KU has been penalized by not being able to play these players.

Silvio in particular would seem to be one of the primary victims at this point, though IMO that has more to do with the NCAA than anything else. I think they should all receive at least 2 years to sit and ponder.

Agreed, Didn't Maryland, 50K?.... I can't believe that Kentucky and Duke are pulling in there recruiting classes, competing for the same kids, and no benefit extended.

not to mention Nike schools ...

If anyone is interested in Sports Law, here is a blog article about Silvio De Sousa.

I'm doing the same research as stated in the blog and have yet to find anything at all. It has always and continues to look like this is a made up crime. However, the nuances of Title IX and the NCAA are complicating factors.
http://blogs.luc.edu/compliance/2017/04/25/the-ncaa-and-title-ix/

Guys, we can play dumb all we want. We all know, even if we're not willing to outwardly admit it, that these universities (INCLUDING KU) know full well what's going on and are complicit. It doesn't speak poorly on KU...they're just playing the game the way it was set up to be played.

Everybody who's anybody is playing the game the same way...Kentucky, UNC, Duke, Arizona, UCLA...they're all paying players indirectly. Some just haven't been caught yet. We're fools to deny it.

Ultimately, the universities didn't create this racketeering scam. That's ALL on the NCAA.

Agree, the NCAA knows it's a racket and they have only selective power.

To the NCAA: Go after them all....but prove it....which they cannot....and they will not even try.

In cycling, they singled out Lance Armstrong even though is was widely known that the entre peloton was dirty with PED. I think the probem is the NCAA itself and this one and done thing. None of this is helping the kids. Today, an education is totally overrated. If the kid can go pro out of high school why waste the year in school? The racket is that kids are forced into and educational system where there options are to take on phenomenal amounts of student debt and come out with limited job prospects, or waiting tables. You don't need and education to wait tables. Let the kids go pro. The educational system is failing America and many kids are underemployed.

Based on the recent articles, it certainly appears that the KU basketball program is in the crosshairs of the NCAA. One would hope that not playing Preston last year and DeSousa this year indicates that Self and the athletic department took the proper steps once they actually became aware of potential infractions. Perhaps that will shield the university from forfeiting victories and getting a suspension from post season activities.

Just imagine how screwed we'd be if Billy didn't crash his Charger.

Correcting your post: “One would hope that not playing Preston last year and DeSousa this year indicates that Self and the athletic department took the proper steps once they actually became aware that KU’s infractions were identified and they wouldn’t be able to just sweep it under the rug”

We held out Preston. Duke did not do the same with Williamson.

This article sure makes it sound like the NCAA is after KU....

I sleep better knowing the F B I is rounding up sneaker salesmen. I m sure there is nothing more important they could be doing to use my tax dollars more wisely.

As I related earlier, if the NCAA took away two years of eligibility from a player over $2500, what do you think they are going to do to a multi million dollar university program that stood to benefit on the court and in the pocketbook?

Rule of law, notwithstanding, the NCAA can apply their own twisted logic. The results could be and don't be surprised:

1] Loss of all victories that Silvio participated in.

4] Probation and no post season this season and maybe the season after that.

Please feel free to call me a chicken little, a "sky faller", an uneducated fan, a downer Debbie or a troll, but there's a storm coming and it's going to really hurt.

As always, I will be the happiest Hawk on this site if I am proved an over-reactive idiot!!!

I personally think you are overreacting...

I'm of the opinion they took away two years of eligibility from a KANSAS player over $2500 in part because of it being a Kansas player and in part because they didn't get to penalize KU over Billy Preston. I don't think Duke or Arizona will be penalized at all for what seem to me to be far more serious violations concerning their head coach and the two marquis players and that simply because they aren't KU.

My gut tells me we're screwed. Does anyone really believe the coaches knew nothing? How does anyone believe that?

No one believes that... only the dreamers.

As of now, all we know was Townsend saying, "we're going to have to do it some way."

Define "it." Unless there is proof that KT was specifically offering cash, employment, or other benefits, there is no infraction. KT can argue that he meant he would have to go all-out with the pitch of dorm rooms, practice facilities, larger crowds, making him the featured star, and so on.

We can speculate on what might seem obvious ($), but without proof of exact arrangements planned or offered, there is no there there.

Well, since the transcript says Townsend was responding DIRECTLY to "he wants cash, housing and employment opportunities for family"... it should be pretty clear as to what "it" is referring to. Let's be serious...Set your KU hat aside and accept the comment for what it is. You know damn well what was intended. If something else was meant.. then KU is doing an incredible disservice by not having Townsend step forward and explain his comments. No, in fact, the University of Kansas chancellor would have you believe that he hasn't even SPOKEN to Townsend about it... under the guise of "waiting for direction from the NCAA". Give me a break...

Like I have stated in earlier posts...feel free to look back on my comments ....we will be penalized...the announcement will come right before Memorial Day Weekend...Coach will survive...we might have a loss of some scholarships.....but Coach can turn almost anyone into winners...so I see no drop off...and wisdom will be gained from the experience...Coach is the very best coach in college basketball....period...his record speaks for its SELF! and he is not guilty of anything that all other coaches do..everyone is doing this...Coach K....Cal...Roy boy....everyone ...period!.

The only Difference Brad is that he may have got caught. Not sure how he makes it through this situation if we are called guilty by the NCAA. And if he does I am not sure how successful the program will be if we have no recruits like what is happening right now. I do not see any 5 star players knocking on Selfs door right now.

Allin- I would suggest that if you're not seeing it's because you're not paying attention. Numerous articles about their interest.

The NCAA and FBI need to go after Duke and Williamson based on the wire tap of what Williamson wanted for his family. Obviously he was going to pick the school who was willing to meet his demands. Duke just beat KU to the punch while KU was trying to "figure a way to get him for 10 months." (Something along those lines). And if anyone thinks that the likes of Duke, NC, and Kentucky are not cheating too...

Exactly. . .why isn't there any follow-up with Zion Williamson? He said he'd go to the program that gave him $$, housing and jobs for his family. He went to Duke. Not rocket science.

Did Arizona have consequences for the Ayton scandal, other than their coach going to another school?

Why is Zion and Duke getting all the media hype, despite Zion’s family apparently being on record via wiretap with an “asking price”?

KU likely knowingly exorcised “plausibly deniability”, but no KU player has played without first being declared eligible by the NCAA - even if it meant serving a penalty.

Dirk. Every year we have interest but so far No signers. Duke UK and UNC already have . We have already had one decommitt.